Dr. Tommie Smith - The Power of a Dream 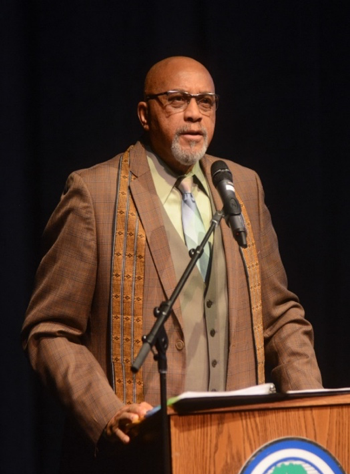 Famed athlete, activist and educator Dr. Tommie Smith will speak in Turlock on Friday, February 28th, in conjunction with Stan State’s campus observance of Black History Month. Tommie Smith is renowned for increasing awareness of racial injustice while prompting a political controversy when he and John Carlos raised their clenched fists on the medalist podium at the 1968 Olympics in Mexico City. Their “silent gesture” of solidarity emerged from the “Olympic Project for Human Rights,” with the expressed purpose of calling attention to racial disparity, especially toward African Americans in the U.S.

Dr. Smith’s presentation is on “The Power of a Dream,” and will focus on why it is important to give voice to things that matter. “Your life begins to end the day you become silent about things that matter.”  This special evening will take place on the Stan State campus in Mainstage Theatre, starting at 7:30 PM. The event is free and open to the public, with general admission seating. Doors will open at 7pm.

Smith won the gold medal in the 200-meter run, but was expelled from the 1968 Olympic Games for expressing his iconic gesture on the medal podium – a gesture widely misconstrued as promoting disrespect for the American flag rather than as an act of expression in solidarity with the civil rights movement.  As a world class athlete, Smith set seven individual world records, became a wide receiver for the Cincinnati Bengals, and was inducted into the National Track and Field Hall of Fame in 1978.  He was also inducted into the California Black Sports Hall of Fame in 1996 and named their “Sportsman of the Millennium” in 1999.  In 2008 he and Olympic teammate John Carlos received the Arthur Ashe Award for Courage, and in 2018 Dr. Smith received the Dresden Peace Prize.

Following the conclusion of his talk, Dr. Smith will conduct a book signing for his autobiography Silent Gesture, published by Temple University Press in 2007.  Copies will available for purchase in the lobby.

We will be posting relevant event links and information here. Check back often.

3 special events sponsored by the College of the Arts, Humanities and Social Sciences
in partnership with the Stanislaus State Affirmative Action & Diversity Committee

Dr. Karlos K. Hill is Associate Professor of History in Texas Tech University's Department of History. He received his PhD in History from the University of Illinois in 2009. Dr. Hill is the founding director of the African American History Month Lecture Series at Texas Tech. He also serves on the President’s Gender Equity Council as Chair of Engagement. Dr. Hill’s primary research interests include the history of lynching and racial violence in America and the anti-lynching movement. He is publishing a book on this topic entitled Beyond the Rope: The Impact of Lynching on Black Culture and Memory (Cambridge University Press, forthcoming 2016). He is also completing a second book entitled The Murder of Emmett Till: A Graphic History, slated for publication by Oxford University Press in 2017. Dr. Hill has also published articles and reviews appearing in the Journal of African American History, The Journal of Southern History, Reviews in American History, and Choice. He is a Louisiana native and currently lives in Lubbock, Texas.  Dr. Hill’s talk will be followed by two respondents, our own Trystan Cotton (Associate Professor of Gender and Ethnic Studies) and Frank Johnson, president of NAACP Modesto/Stanislaus Branch 1048.

Aisha Fukushima is a dynamic public speaker, educator, singer, and ‘RAPtivist’ (rap activist) performer. Fukushima founded RAPtivism (Rap Activism), a global hip hop project performed in 10 countries on four continents, highlighting important ways culture can contribute to universal efforts to achieve greater freedom and justice by challenging apathy with awareness, ignorance with intelligence, and oppression with expression. She is a dynamic multilingual, multiracial African American Japanese woman whose work is influenced by her global upbringing, with roots spanning from her birthplace of Seattle, Washington to her other hometown of Yokohama, Japan.   http://aishafukushima.com/bio

“Hip hop is a very intellectual exercise. As a self-proclaimed raptivist, I am continually learning ways to challenge and question injustices, especially in situations where under-represented voices are marginalized or silenced. Hip-hop is a rich cultural movement to explore not only because of its significant social and political influences, but also because is an art form that merits risk-taking and the ability to challenge personal limitations. Whether participating in a rap battle or allowing music to inspire improvised dance moves in the street, to live as a raptivist is to consistently seek to refine and improve one’s own artistic and intellectual sensibilities.”  Aisha Fukushima

Hugh Vasquez — Transforming Systems of Privilege to Increase Social Equity: A Critical Role for Coalitions in Addressing the Color of Fear

Senior Associate with the National Equity Project in Oakland, CA and a speaker and educator on social justice issues. He is dedicated to ending all forms of social oppression and building cross-cultural alliances. Driven by a deep sense of fairness, equity, and justice, Hugh has emerged as one of the nation’s top leaders in working to create environments where people from all cultures are honored, respected, and valued.  In the past 25 plus years, Hugh has worked with hundreds of organizations who want to take on the challenges of eliminating the social conditions that produce racism, sexism, classism, homophobia and the like. He has assisted local, regional, and national organizations to address inequities in our social institutions and he has provided training to thousands of individuals throughout the country.  He is perhaps best known for his contributions to The Color of Fear, a landmark documentary project from 1994 addressing the state of race relations in America, which continues to be featured in college and university curriculums throughout the country.   http://hughvasquez.com/hugh_vasquez/About_Us.html

A celebration of eclectic and contemporary arts with a lively atmosphere filled with food, entertainment and history. Click here for the BAM Conference website.