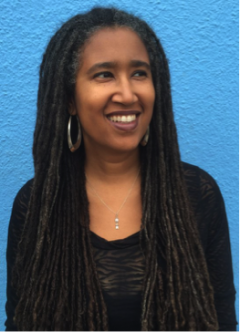 Aya de Leon is an acclaimed writer, poet, spoken word artist and community activist. A graduate of Harvard and Antioch, Aya teaches spoken word, poetry and creative writing in the African American Studies Department at UC Berkeley, serving as Director of Poetry for the People (a campus arts and activism program founded by June Jordan to work with young student-poets).

Her work has received acclaim in the Village Voice, Washington Post, American Theatre Magazine, and has been featured on Def Poetry, in Essence Magazine, and various anthologies and journals.  In 2004, Aya was named best discovery in theater by the SF Chronicle for “Thieves in the Temple: The Reclaiming of Hip Hop,” a solo show about fighting sexism and commercialism in hip hop, later chronicling these concerns in her poem “If Women Ran Hip Hop.” She received a 2004 Goldie award in spoken word from the SF Bay Guardian for “Thieves…” and “Aya de Leon is Running for President.”  In 2005 she was voted “Slamminest Poet” in the East Bay Express, and she co-hosted the kickoff party for Current TV with Mos Def.  Aya has been an artist in residence at Stanford University, a Cave Canem poetry fellow, and a slam poetry champion.  She publicly married herself in the 90s and since 1995 has been hosting an annual Valentine’s Day show that focuses on self-love. She has released three spoken word CDs, several chapbooks, and a video of “Thieves…” Since becoming a mom in 2009, she has been transitioning from being a touring performer into being a novelist.  Aya began blogging in 2011, and since 2013 has been consistently blogging on race, gender and culture. Her freelance work has been featured in Guernica (“Fifty Shades of Political Torture”), xojane, Huffington Post, The Toast, Ebony, Womans Day, Writers Digest, Mutha Magazine, Movement Strategy Center, My Brown Baby, The Good Men Project, KQED Pop, Bitch Magazine, The Feminist Wire, Racialicious, and Quartz. Kensington Books recently published her debut novel UPTOWN THIEF, a Latina Robin Hood heist story set on New York’s Lower East Side.

“Showing up for racial justice” 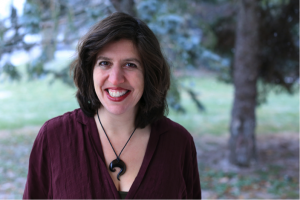 Dara Silverman is a long-time organizer, writer and trainer who has been building movements for economic, racial, gender and social justice for over 20 years. Dara has served as Executive Director of Jews for Racial and Economic Justice (JFREJ) and was the Founding Director of Showing Up for Racial Justice (SURJ), a national network of white people taking action for racial justice. Dara helped grow SURJ from 12 chapters to over 150 chapters, raising over $500,000 for Black-led organizing through the matched giving program and moving SURJ successfully though the startup stage.  She specializes in working with leaders to align their actions with their vision, and their values with a plan for action.

Over the past twenty years, Dara has been working with local communities across the country to move into action against racism, economic inequality and bigotry.  Her talks feature lively examples grounded in decades of real-life campaigns, from the fight for a living wage at Harvard to housing rights efforts in Denver to police accountability campaigns in New York City. Dara has stories from the trenches and years of experience speaking and connecting with young people to bring real life experience to bear on political conversations. Dara has worked with numerous faith communities to develop resources used by thousands of faith leaders on racial justice issues across the country. She has produced workshops on coalition building and offered leadership development to organizations, emphasizing the role of intersectional analysis in helping build toward racial justice. Her work has been published or featured in the New York Times, Tikkun, Zeek, Curve, and the San Francisco Bay Guardian. She contributed a chapter on immigration to the anthology, Righteous Indignation: A Jewish Call for Justice and co-created The Love and Justice in Times of War Haggadah. 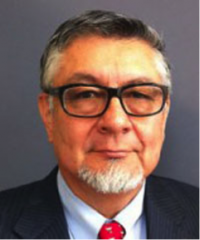 David Hayes-Bautista is currently Professor of Medicine and Director of the Center for the Study of Latino Health and Culture at the David Geffen School of Medicine at UCLA. He graduated from UC Berkeley, and completed his doctoral work in Medical Sociology at the University of California Medical Center, San Francisco. He served on the faculty at the School of Public Health at U.C. Berkeley until 1987, when he took his current position at UCLA.  He has been an important voice in the statewide and national dialogue concerning equitable (and inequitable) provision of (and access to) health care.

Dr. Hayes-Bautista serves as the faculty advisor for the UCLA/Drew chapter of the Latino Medical Student Association and the pre-medical group Chicanos/Latinos for Community Medicine (CCM), and is a senior advisor to the California Latino Medical Association. His research has appeared in a variety of medical journals, including Family Medicine, the American Journal of Public Health, Family Practice, Academic Medicine, and Salud Pública de México. His books include The Burden of Support: Young Latinos in an Aging Society, Healing Latinos: Fantasia y Realidad and La Nueva California: Latinos in the Golden State. His research focuses on the dynamics and processes of the health of the Latino population using both quantitative data sets and qualitative observations. In 2012, he received the Herbert W. Nickens Award from the Association of American Medical Colleges for "outstanding contributions to promoting justice in medical education and health equity in the United States." Dr. Hayes-Bautista writes columns for the Los Angeles Times and La Opinion, and is often asked to p 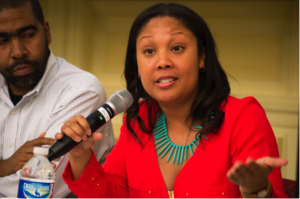 Taharee Apirom Jackson is Assistant Professor of Minority and Urban Education in the Department of Teaching and Learning, Policy and Leadership at the University of Maryland.  She specializes in teacher education, multicultural education, and urban education reform.  See “Starting With Self: Using Self-Discovery to Prepare Culturally Competent Teachers.” Dr. Jackson holds degrees from Harvard University, Harvard Graduate School of Education and Emory University.

“I will continue to teach my teachers—to teach their students—that all human life is valuable.  That skin color is not a marker of automatic danger (blackness) or automatic innocence (whiteness).  That way, young black boys won’t be presumed guilty as they walk home with candy in their pockets, or when they blast their music loudly at a convenience store. And the white men who gun them down won’t be presumed to be acting in self-defense.  And get away with murder.  Literally.”

“And that’s not all I can do.  I’m a consultant for inclusion and diversity.  Oh, yes.  I will continue to accept invitations from private corporations, non-profit organizations, school systems, and teacher preparation programs to discuss difference, systemic privilege and oppression, racism, and most importantly, anti-racism.”

“Look out, injustice.  I have a plan.  I am simultaneously seething and saturated with heartbreak at all I’ve seen in the media this year, and all I experience as a multiracial woman who is often perceived as black.  In addition to the story of Trayvon Martin, Jordan Davis, Darrin Manning, and Oscar Grant (on whose life the film Fruitvale Station is based), I experience similar disdain all the time.  Just the other day, a white woman in a dentist’s office hurried to her purse and buried it in her arm as soon as she noticed I had walked in.  She shot me a long glance to make sure I knew her actions were aimed at protecting her valuables from me.  At least she shot me a glance and did not actually shoot me.  Because if she had, she would have killed an unarmed, Ph.D-holding, two-time Harvard graduate.  And probably been let go.”

“As someone who is devastated by pervasive racism in American life and law, there is much I can do.  Racism and injustice had better watch their backs.  Because I am—we are—not helpless. And their time is limited.” 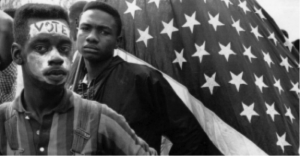 Devonte Jackson is a Bay Area organizer for Black Alliance for Just Immigration (BAJI), and a Bay Area leader in the Black Lives Matter movement.

“The Movement for Black Lives Policy Platform lays out a radical vision for Black people in the U.S. and can serve as a tool for movements as we approach the November General Elections. Black Lives Matter Bay Area will participate in an upcoming local elections town hall meeting on October 1st. We are preparing by prioritizing internal education around the Political Power portion of the Vision for Black Lives Platform. Nearly 575,000 undocumented Black immigrants can’t vote and Black folks, regardless of status, face mass criminalization in the form of over-policing, incarceration, and the prison industrial complex, which impacts our ability to vote and exercise full political power. It’s important to recognize and acknowledge how folks who have been intentionally marginalized by the state fit into the broader vision for Black Political Power. This blog is a reflection on the third demand within the Political Power segment of the Movement for Black Lives Policy platform that essentially calls for universal suffrage.”

“The third demand initially caught my attention because it called for the right to vote for all people.  Our democracy would be radically transformed if we enfranchised undocumented and formerly/presently incarcerated folks by including them in the political process. The Movement for Black Lives United Front demands the “enfranchisement of formerly and presently incarcerated people, local and state resident voting for undocumented people, and a ban on any disenfranchisement laws… Because of this law there are approximately 11 million people currently residing in the U.S. who lack citizenship and the privileges that come with it, one of those privileges being the right to vote.”

“In many of the visioning sessions I’ve had with Black folks in the movement, we have questioned the necessity of borders altogether. We challenged the very notion of borders by highlighting the violent and controlling oppression they create in Black communities around the globe. We believed that borders shouldn’t define who belongs and who does not. We imagined a world without borders.  A world where people have a right to freely move and create home. For me, to live in a world without borders, we must challenge the very notion of citizenship. I argue that we should continue struggling around what Black Political Power means for us. For me, to exercise full Black Political Power, we must demand full participation of undocumented immigrants at all levels of government.” 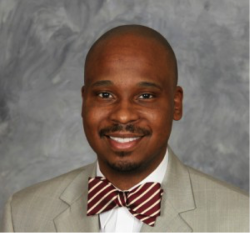 Dr. Marks serves on the MBK Task Force for Fulton County, GA, and has given several presentations on minority male achievement and counter stereotypical messaging of young Black men to MBK task forces and elected officials. Dr. Marks is member and former chair of the Diversity Climate Committee for the Society for Personality and Social Psychology and serves on advisory boards for the American Men’s Studies Association and the College Board as well as the Morehouse College Board of Trustees. He holds a B.A. in psychology and a minor in economics from Morehouse College, and an M.A. and Ph.D. in Social Psychology from the University of Michigan. Dr. Marks’ conducts research and professional development in the areas of Black male psychology and development, institutional practices that improve African American student achievement, diversity in organizations, innovations in STEM education in high school and college, scientific literacy and identity, and using STEM concepts to teach life skills, character, and habits of success.