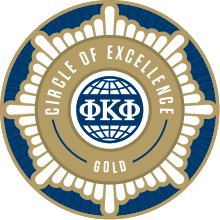 In December 2020, Phi Kappa Phi announced the chapters receiving a 2020-2021 Circle of Excellence commendation. The awards—Platinum, Gold, and Silver—are given to the Society’s top chapters that excel in recognizing and promoting academic excellence on their local campus and engaging the community of scholars in service to others.

The Circle of Excellence distinction was introduced in 2018. This year, the program named 67 chapters with recognition including 21 as Platinum, 20 as Gold, and 26 as Silver.