The department offers many scholarships each year to deserving students majoring in Economics. Scholarship awards range from $100 up to full remission of registration fees for the academic year. All Economics majors are encouraged to apply. Factors considered include; GPA, career interests, financial need, activities and long term goals. For further information contact the Economics Department. 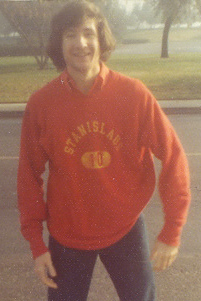 The James Brownlee Scholarship was created by Jim's parents, in his memory. His accidental death occurred while Jim was attending then Stanislaus State College. This scholarship is granted annually to an outstanding Economics major selected by the Economics Department. The number of scholarships and amounts vary from year to year. 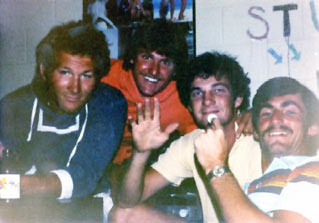 ​At CSU Stanislaus Eric was actively involved in Associated Students government as a member of the Finance Commission. A week before his very untimely death in May 1983, he was named the recipient of the Economics Department's Scholarship for the 1983-84 academic year. Eric will always be missed by his friends and family and in that memory, this scholarship was established.

Jeff Goshay wrote the following on June 5, 2005 (Eric's Birthday) in memory of his brother, Eric:

"Eric was my brother (far left) and would have turned 44 today had he not died so much before his time. On this day I often think of him.

I do remember his days at CSU as I visited him several times there. My older brother and I, just a few years older, were always pleased to see Eric's life out from under our shadow. He had an infectious way of sharing his gritty, usually cheerful moods with everyone around him. Eric was pretty smart, certainly no genius, but when Eric became a part of a group he was truly proud, and you felt flattered if you were part of it too. To this day, many of his old friends, as well as his family members, miss the way he could strengthen those around him in his unique, self deprecating style. Although his time was short at CSU, he had such an effect on many there, especially in the Econ Dept. His loss was painful for so many because with him went strength and a lot of humor.

In recognition of Eric's affection for the people in the Econ Dept at CSU, my dad set up this scholarship with the late Dr. Kottke. I'm sure you have a fine method for awarding the scholarship, but I was thinking it should be reflective of Eric.

Eric didn't have the highest grades, but when he became inspired he tried so very hard. His story often was that of a "most improved" person, and although he might not always be the leader, his character would galvanize the group, frequently through humor. I would think the award should be given to someone who has that kind of an effect in one of your groups in the Dept."

We strongly encourage anyone that would like to contribute their own thoughts and memories of Eric to this site to please using the contact page.

This scholarship is granted annually to an outstanding Economics Major selected by the Economics Department. The number of scholarships and amounts vary from year to year.

Thomas (Tom) Orrin Foster was the former head of Foster Poultry Farms and a champion auto racer. The youngest of four sons, Tom was born to the family business founders, Harry Max Foster and Verda Foster. Tom passed away in September 1999. He was known as a visionary because of his leadership in forming the Foster Farms Board of Directors and the company's plan for restructuring early in the 1990s. In his spare time he and a partner formed Tracer Racing, which also designed and manufactured racing cars and parts. Although Tom routinely and quietly gave to many charitable causes during his life, he is particularly remembered for his many contributions to CSU Stanislaus. Tom graduated from CSU Stanislaus in 1971 with a bachelors degree in Economics. This scholarship was established in order to help students in those areas of study that will keep the traditions of the Foster family and Foster Farms alive and to serve as a remembrance of Tom Foster.

Number of Awards: varies as well as the amount of the awards.

The late Dr. Frederick E. Kottke, CSU Stanislaus Outstanding Professor of 1987-88, was renowned for his impact on students. For decades, he taught, inspired, and befriended his students. His lively 8 o'clock Economics Principles class became legendary with students, along with his whistling routine that echoed through the halls.

The Economics Department has initiated a special campaign to raise funds for the Fred Kottke Memorial Scholarship and the Fred Kottke Free Enterprise Investment Fund, both of which provide financial assistance to CSU Stanislaus students.

The foundation for this scholarship account was laid down shortly after Dr. Kottke passed away in 1994. The funds to award scholarships to students started coming into the account in 1998. The amount of the scholarship varies, depending on the activity of the account from the previous year's donations.

The eligibility criteria for the scholarship is as follows:

If you wish to apply for the scholarship, the dead- line for applying is the first part of March of each academic year.

The Economics Association uses The Fred Kottke Free Enterprise Investment Fund, an ongoing investment project, as a tool for applying classroom skills to the stock market by setting up an investment account for student management. The account provides practical investment experience in conjunction with the Economics of Investment course.

Students or Alumni who want to help with either or both of these projects can contact Dr. Edward Erickson in the Economics Department at (209) 667-3338.

These scholarships were established by Daniel MacKenzie in 1995. Dan is a successful alumnus of the CSU Stanislaus Economics Department. Dan was raised in Los Angeles. He attended CSU Stanislaus from 1979 to 1984, graduating with a bachelor's degree in economics. His recollections of Stanislaus in the late 70's were that "...there were more farm animals on campus than students." Dan has been tremendously supportive of Economics students, and has shared his knowledge gained from his career.

The purpose of this scholarship is to recognize outstanding potential and effort within the field of Economics at California State University, Stanislaus.

Number of Awards and amount: One Scholarship annually, in the amount of $500

The purpose of this scholarship is to cover part of a student's work-study expense in the field of network programming.

Number of Awards and Amount: One scholarship annually, in the amount of $500

*Units of academic credit and work-study location to be determined annually.

The purpose of the Max & Verda Foster Memorial Scholarship is to encourage, reward and assist students, in any concentration of Business Administration or Economics, who are interested in a career related to the agricultural industry.

The Max & Verda Foster Memorial Scholarship is available to award three scholarships each to Business Administration majors (any concentration) and Economics for the current academic year. The amount of each award will be full registration fees for the academic year.

Criteria for the scholarship is as follows: