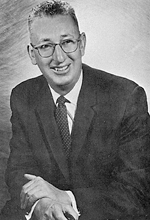 The J. Burton Vasché Award is given annually to a student who displays the highest standards of leadership, cooperation, participation, service and scholarship. It is named in honor of the university’s founding president, J. Burton Vasché.

Vasché was named founding president on May 13, 1960. A native of Oakdale, Vasche spearheaded the opening of what was then known as Stanislaus State College at the Stanislaus County Fairgrounds while planning took place for construction of the new campus on Monte Vista Avenue. He directed the hiring process for the first faculty members, key administrators and staff before the first day of classes on Sept. 19, 1960.

Office of the Provost