I specialize in 19th and 20th C. European philosophy, with particular attention to notions of temporality and of 'event.' At Stanislaus, I am responsible for Language, Mind and Knowledge. I approach these areas from the same discursive and theoretical frameworks which interest me historically.  More detail on my work can be found under my links below.  I am also the Philosophy Department's liaison to, and currently co-coordinator of the interdisciplinary program in Cognitive Studies (a collaboration of Philosophy, CS and Psych).

I began in physics, at UCI, and then slowly discovered European philosophy, in the margins of that institution. This led me to pursue graduate study in Europe, first in Germany, and then in France for the doctoral degree.  I studied with a variety of philosophers over the years - many of whom were at odds with each other, sometimes philosophically, sometimes personally. I learned from all of them and especially from their differences. (Don't you wish we could all just get along?) 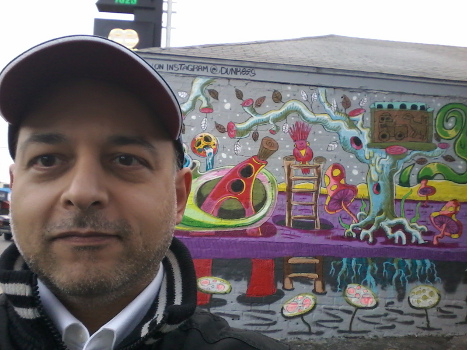 I have taught almost everything in our curriculm at one time or another, but for the foreseeable future I am most likely to cycle through the following courses while selecting from the listed authors:

I usually teach material that I have, or am, working on in my own research. Anyone interested in asking for an independent study should think about this. We have an informal division of labor here, your proposals and requests should respect that.

I have a wide range of interests including Kant and Classical German Philosophy, German Phenomenology (Husserl, Heidegger), Structuralist linguistics and so-called 'Post-Structuralist' French philosophers (Derrida, Nancy, Deleuze, Lyotard). I am also interested in the early history of psychiatry/psychoanalysis (Janet, Freud, Jaspers). In general, my work is situated at the intersection of different languages and traditions. I have some topical interests in Ancient, post-Aristotelian philosophers; the overarching idea there is a critical examination of Heidegger's interpretation(s) of the history of metaphysics. When working on earlier historical figures, I pursue an interest in traditions of commentary and interpretation that provide the framework and practices leading to the constitution of a tradition.

For more detailed information, consult my Teaching Page and my Research Page.

In varying stages of completion....