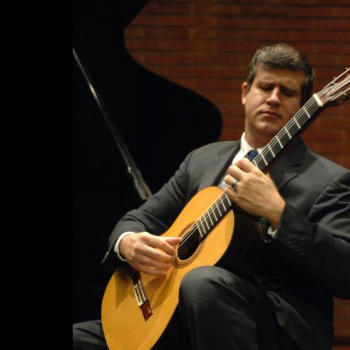 Ecuadorian by birth and a Fulbright scholar, Dr. David Chapman, is in worldwide demand for Lectures, Demonstrations and Concerts on the Classical, Flamenco Guitar and Lute. His career has taken him to stages in Russia, China, Japan, Thailand, England, Germany, Italy, Ecuador, Argentina and Mexico as well as extensively through the US.

Dr. Chapman has published the guitar method, “Xitarra Sapientia" and is soon to release “Smart Practicing,” a guide to instrumentalists who seek to establish a healthy and successful practice routine.

He leads the Stanislaus State Guitar Department and has served as Director of Guitar Studies at the Modesto Junior College for the last 16 years, where he hosts the biennial Guitar Festival ¡Guitarraganza!

Dr. Chapman did studies at the Musikhohschüle Köln (Germany -as a Fulbright Scholar), the Academia Chigiana (Siena, Italy),the Conservatorio Antonio Neumane (Guayaquil, Ecuador), the San Francisco Conservatory of Music, the University of Texas at Austin as well as the California State Universities in Fresno and Sacramento (USA).