One More Thing Before He Goes 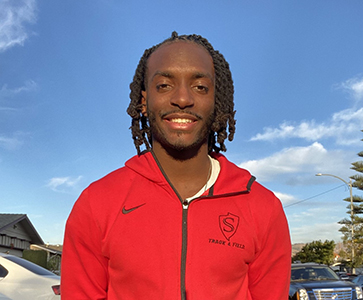 Isaac McCrimon came to Stanislaus State because it was the only University that accepted his identical twin, Isaiah.

“I wanted to go somewhere big,” he said. “I run track, and I was talking to the Cal Poly Pomona coach. I had been accepted and we were talking about the opportunity for my trying out and making the roster.”

The desire to stay with his twin was greater, though, and he became a Warrior.

Isaiah left after one semester, but Isaac McCrimon remained and fully embraced the University.

He ran track, where he’s a sprinter and jumper, and expects to graduate in May with a degree in business administration with a concentration in accounting. As he completes his final year, he’s serving as an intern with the newly created Male Success Initiative (MSI) in the Warrior Cross Cultural Center, working with Miguel Jimenez and Carolina Alfaro.

“We’re going to do things that haven’t worked or have not been seen or done on this campus before,” McCrimon said.

In its first semester, the MSI has held several virtual discussions, including two mental health forums. It helped launch the Black Men’s Alliance and there have been several Barbershop Talks, patterned after those created by NBA star LeBron James, which discuss issues pertinent to Black men. MSI is focused on dismantling unhealthy expressions of masculinity, McCrimon said. The mission is to empower men of color to excel in higher education and post-higher education.

Plans for the spring include launching a mentorship program, a Men of Color podcast series, and more Barbershop Talks.

“Honestly, this internship has been dope, because this is what I’ve been wanting to do on my own for my community,” McCrimon said.

Before Stan State, his community was Gilroy, where he lived with his single mom and four brothers, surrounded by white and Hispanic people.

He was 10 when he was called Black for the first time. He argued with his classmate that his skin was dark brown. His mother explained to him that in this country, that means he’s Black.

A year later, he was called the “Hard R” for the first time. It wouldn’t be the last time.

At Gilroy’s Christopher High School, with a population of about 2,000, McCrimon was one-of-20 Black students. He and his twin were well known, in part for being twins, but also because they played football, wrestled and ran track.

He said he got along with everyone, but he was subject to racial slurs.

At Stan State he joined the Black Student Union and served as its treasurer while trying to maintain his grades and run track. The experience of being a club officer has proven invaluable to him in his internship, he said.

“This will ensure men of color, including Black students, are being helped. We’re not here to be a social club. We’re having dialogues that will lead to action. We are going to contribute to the success of students in their higher education and post-higher education journey at Stan State.”
~ Isaac McCrimon

McCrimon was a part of BSU when Alfaro invited its members to apply for the six spots she had open to attend the CSU Young Males of Color Forum at the California Endowment Center in Los Angeles last year.

“Isaac was the first student who submitted an interest form, and by the time I set up an interview with him, he had done his research on the purpose and importance of this forum and learned about other MSI programs,” Alfaro said. “At the forum, Isaac immediately engaged with other young men of color and male success project coordinators from other CSU campuses. He witnessed firsthand the impact that a male success program can have and offered to support it on our campus.”

“My world was just blown up,” McCrimon said. “They had panelists from every race, every shade, different orientations, too. One of the student panelists, I was looking at him like, ‘Man, that could be me.’ I was really inspired by what they did on their campuses. Their stories matched my story, and I was like, ‘Oh, snap. This is great. That could be me.'”

“This will ensure men of color, including Black students, are being helped,” McCrimon said of his involvement building Stan State’s Male Success Initiative. “We’re not here to be a social club. We’re having dialogues that will lead to action. We are going to contribute to the success of students in their higher education and post-higher education journey at Stan State.”

It’s the kind of program McCrimon has long hoped to be a part of.

“I’ve seen athletes come and go, Black athletes in particular,” McCrimon said. “They have financial problems or family problems that cause them to be derailed.

“I saw that and said, ‘I can make a difference, because I can relate to the experiences many Black men have faced in this country. I know how to articulate that. I’d be able to speak to other students and get them involved.”

Alfaro saw that quality in McCrimon.

He’s helping build a program that he would like to have had when he arrived at Stan State.

“I don’t dwell on what I didn’t have here, or what I wish I’d had growing up, but on being a person who creates opportunities for people who come after me,” McCrimon said. “That’s what I want to be known for. I could care less if my name is remembered. I genuinely want other students to be helped on this journey we call life. This is bigger than me. I see an opportunity that benefits others and I’m all in. I want to put the program in a position to make a difference.” 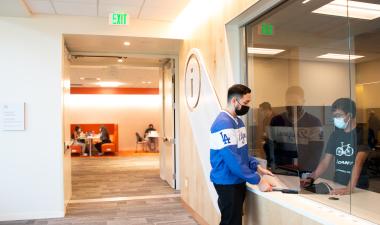 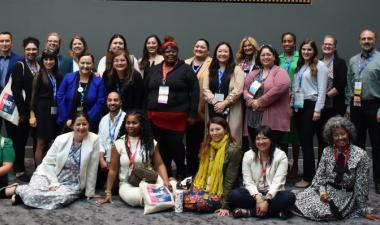 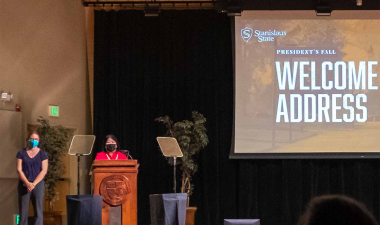