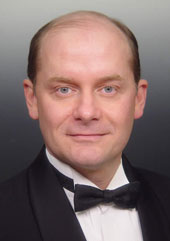 Dr. Joseph Wiggett directs the Opera Workshop and maintains an active Applied Voice studio in addition to his teaching duties in Vocal Pedagogy, Lyric Diction, and Vocal Literature. He is the former Director of the School of fine and Performing Arts at Stanislaus State, as well as the former Artistic Director and principal Stage Director for Townsend Opera of Modesto, for which he directed productions at the Gallo Center for the Performing Arts.  In 2012, he was awarded the Stanislaus Arts Council Excellence in Arts Award for Excellence in Music in recognition of his “outstanding contributions to the Arts and Culture.”

As a past member of the Juilliard Opera Center, the Lyric Opera of Chicago Center for American Artists and the Prague Mozart Academy, he has performed over three-dozen operatic roles and has given recitals and made concert appearances throughout the United States, Europe, China and the former Soviet Union. He is the recipient of numerous awards and honors including three Birgit Nilsson prizes, as well as two grants from the Puccini Foundation.

As a contest singer, Dr. Wiggett has taken first place honors in the Metropolitan Opera New England Regional Auditions, the Chicago Union Civic and Arts Leagues Competition, and the Center for Contemporary Opera International Competition.  He is also the only three-time winner of the prestigious, Lillian Nordica Prize.

Among his major debuts are roles with the New York City Opera, the Lyric Opera of Chicago, a solo recital in the Carnegie Hall Weill Recital Series, and his Lincoln Center debut at Alice Tully Hall as the baritone soloist in Orff’s Carmina Burana.  As a concert performer, Dr. Wiggett has appeared with numerous orchestras including the Modesto, Manhattan, Boulder, Bangor, Portland, Milwaukee and Colorado Symphonies.  He holds degrees in Music Education from the University of Maine, a Masters Degree in Performance from the Manhattan School of Music and a Doctorate in Vocal Performance and Pedagogy from the University of Colorado, Boulder.