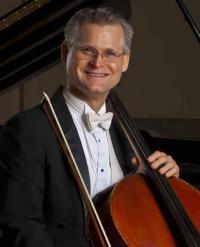 Dr. Daniel Davies is Professor of Cello at California State University, Stanislaus. From 2005-2015, he served as the director of Summer Music at Stanislaus, Stanislaus State’s summer music camp. From 1991-2003 Dr. Davies served on the music faculty of Wheaton College Conservatory of Music in Illinois.

An experienced and consummate performer, Dr. Davies has performed with orchestras throughout the country. On the east coast, he performed with the Westchester Symphony, the Queens Orchestral Society, the Greenwich Symphony and the Hudson Valley Philharmonic. When in Chicago, he was principal cellist of the New Philharmonic Orchestra, a member of the Elgin and Lake Forest symphonies, and performed with other Chicago-area orchestras, including the Chicago and Milwaukee Symphonies. He was also a familiar face in the Chicago free-lance circuit, participating in various recordings and shows, including Miss Saigon, Phantom of the Opera, and Showboat. He was a founding member of the Paragon Ragtime Orchestra and participated in their inaugural recording, “On the Boardwalk”. Currently, he is a member of the Modesto Symphony Orchestra, and has performed with the Stockton and Sacramento symphonies.

Recent performances include recitals in California, Illinois, Indiana, and Wisconsin, as well as a three-city concert tour of China.