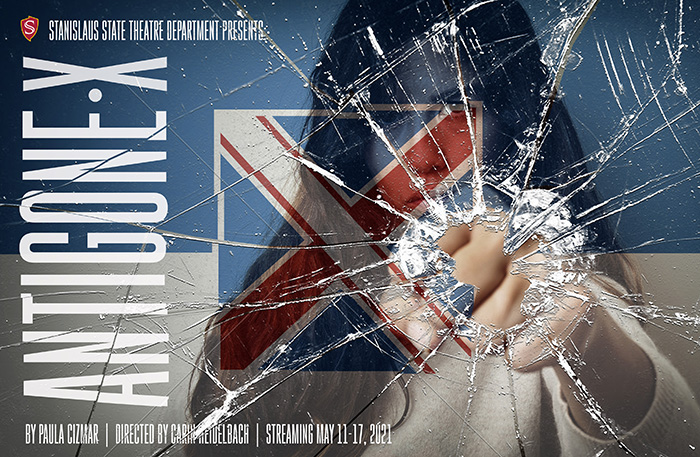 The streaming performance of "Antigone X" by Paula Cizmar, Directed by Carin Heidelbach will be available May, 11th - 17th, via Showtix4U.

The once-magnificent world is in a state of rage. Thebes is now a ruin surrounded by refugee camps. And Antigone X could be any of us who dares to stand up to unjust laws and demand, instead, the higher powers of tolerance and decency. A contemporary meditation on love, power, and war.

At its heart “AntigoneX” is a play about the place of women and femininity and the power to resist and reclaim that which belongs to them. It is a story about civil disobedience.

I wanted to take a minute to congratulate you and your students on a wonderful production of "Antigone X." I was not familiar with the work, but after my colleague, Gina Oltman wrote about the production, I got a ticket and just finished watching it. I thought it was fabulous.

Your cast is simply amazing, and the costuming, sets and special effects -- the birds, weather and sound -- were terrific. I know there's a different energy with a live performance, with the audience and cast feeding off each other, but this felt live.

Of course, you were required to adjust to video production, but if offered an opportunity that a live production wouldn't. I'm thinking of an overhead shot that was used early in the production that was effective. I liked that while you had those capabilities, you didn't overplay them. You let this production feel like a live stage production and just inserted the occasional element that benefitted from being a recorded show.

This is the first opportunity I have had to watch one of your department's shows, and I was simply wowed. As I said, the cast was wonderful. Everyone seemed perfectly cast, and there were some very strong performances. This was a show with a lot of moving parts on the production end, and it all seemed seamless. I know a lot of work and planning went into making it feel that way, and the result is one to be proud of. Everyone involved obviously put great energy and creativity into his or her craft to produce this fine play.

Well done, all of you. Most sincerely, Lori Gilbert

Here's some behind-the-scene images of Antigone X. Click on any image to launch a viewer.