Home  STAN Magazine  The Heart of a Champion

The Heart of a Champion

She Never Put on a Uniform, but Donna Pierce has Been a Part of Warrior Athletics as Much as Any Accomplished Athlete 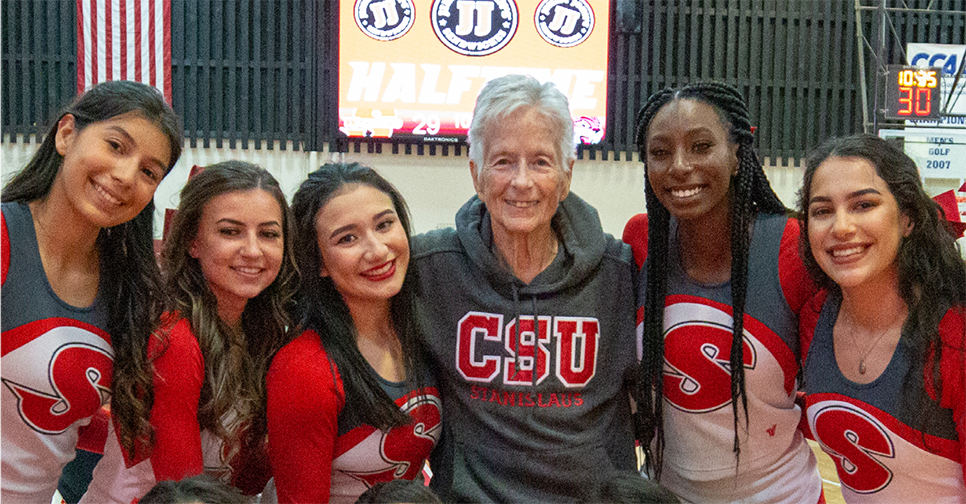 When Stanislaus State hired Wayne Pierce to teach botany in 1971, the University had no idea it was getting a package deal.

Although his wife, Donna Pierce, was never an employee, she has been just as involved as anyone on campus and is something of an unofficial historian.

The two were enthusiastic boosters of Warrior sports. Wayne served as Faculty Representative to Athletics for 25 years. A tremendous sports fan, Donna served as a clock keeper and later an official scorekeeper at Warrior basketball games for more than 30 years.

She was inducted into the Warrior Athletics Hall of Fame in 2007, four years after Wayne. Her greatest legacy may be providing the funding to complete the Trans-California Pathway in honor of her late husband, who dreamed of such a space for decades.

But her roots with the University run deeper.

“Donna is not just a supporter of Warrior Athletics, she’s part of the family,” said Hung Tsai, assistant athletics director, communications and marketing. “Her long-time commitment to the well-being of our student-athletes, coaches and staff has been invaluable to the entire Stanislaus State community.”

She attended every kind of Stan State sporting event, except maybe softball.

“I was the first softball coach,” Pierce said. “They were desperate, and I was available. We were horrible.”

That 1976 team was formed in the early days after Title IX provided equal opportunities for women. Pierce recalled having five players who’d never played the game and four who could but had “bad attitudes.”

The field was carved out of a dirt parking lot by the gym. The team won only one game, against Sonoma State University, a team with “a 36-year-old player with a brace on her leg who stole second and third on my catcher,” Pierce remembered.

“The only thing I can say about it is we showed up at all our games with whoever we could manage to get,” Pierce said. “We had credibility by showing up, and we paved the way so whoever followed us could have a team.”

However, it wasn’t going to be Pierce. Even though she helped with the planning of the new softball facility years later, she couldn’t bring herself to even watch a softball game.

“When that season was over, I asked Wayne to take me away for a while and we went to Houston,” Pierce said.

During that six-month sabbatical, Wayne worked at the University of Houston, which was one of only two times in nearly 50 years that Donna Pierce left Turlock.

The other happened when she attended Ronald Regan’s 1981 inauguration with a group from Stan State and fell in love with Washington D.C. Wayne Pierce took a sabbatical and worked in the laboratory at the University of Maryland.

“It was a fantastic time in our lives,” she said.

But their hearts were in Turlock.

The two were fixtures at Stan State athletics events.

“I was an obnoxious fan, always yelling,” Donna admits.

But, when the timekeeper failed to show up for the annual men’s and women’s basketball tournament held over Thanksgiving weekend in the early 1980s, tennis coach and Assistant Athletics Director Jack Lackey recruited Pierce from the stands.

She’d never had a lesson on how to do it, but she settled into the scorer’s table and never left, first as the game clock keeper, then the official scorer.

Health issues prompted her to retire early in the 2019-20 season but not before every referee posed for a photo with her at the suggestion of the head of officiating.

“That meant everything,” Pierce said. “Then at my last game, the young man who was the lead official asked, ‘Would you like to go to the captain’s meeting?’ How awesome was that?

“I have loved every moment of it. It was so hard for me to give it up. I loved the interaction with officials and students. It’s been fantastic.”

The bond she formed with student athletes continues. Every year, she gathers former women athletes at a holiday luncheon, and she sees others regularly.

One lived with her for a short while when she was going through a hard time, and later purchased Wayne and Donna’s home in Turlock.

Another former athlete, Ann Kucera, played basketball for the Warriors from 1981-85 and teaches elementary school in Modesto.

“She’s a reminder of a good time in your life that you get every time you’re with her,” Kucera said.

As a student-athlete, Kucera remembers Pierce as a constant, caring presence.

“Donna wanted people to feel comfortable when they came to school at Stan State, that they made a good decision,” Kucera said. “She wanted to be part of that transition and be a part of their lives if they wanted her to be. She never forced herself on anyone.”

“I worked for the youth authority, and I spent my days with tortured children,” Donna said. “I had a chance to watch healthy youngsters play sports. To this day, I’m friends with these girls I met when they were 18 or 19 in 1980. I can’t tell you what that means to me.”

Her love for Stan State was exceeded only by her love for her husband and daughter Amy, whom the couple adopted in 1967.

The couple met in their hometown of Atascadero, bonding over their love of the Brooklyn Dodgers, whose World Series games with the New York Yankees were broadcast during lunchtime in the school cafeteria.

They lived there six years, adopted Amy, and when he completed his studies, Wayne received offers to teach in Connecticut, Nashville, Reno and Turlock.

Donna, walking home from a late shift of work, hit a tree branch that dumped snow down her back, and she woke up her husband and said, “Call Connecticut, Nashville and Reno and tell them, ‘No.’ I’m done with snow.”

Turlock was ideal. It was close to Yosemite National Park and the Sierra Foothills that Wayne loved, and to the ocean, which Donna loved.

Wayne Pierce’s goal was to be the best teacher he could be, Donna said, and Stan State allowed him to pursue that dream.

His other dream was to create a space on campus for biology and botany students to see the fauna and flora of California without having to take a field trip.

The University set aside four acres at the corner of Geer Road and Monte Vista Avenue “but there wasn’t any money,” Donna Pierce said.

Wayne and colleagues Dave Gotelli and Ida Bowers procured 300 acorns and saplings and with family, friends, colleagues and students, planted them on a cold November day in 1989.

For three years, Donne and Wayne weeded what looked like an empty patch of dirt and connected a series of hoses from the Science 1 Building to water those acorns. Forty-seven took root.

After Wayne died in 2008, Donna used her own resources and procured donations from friends and colleagues to finally bring to life the Trans-California Pathway her husband had always envisioned.

The project broke ground in October 2009, and three years later, the pathway opened.

“Wayne never got to see it,” Donna said. “He always talked about a place, not just for his students to study ecology but for the community. ‘There are children who have never been to Yosemite,’ he said. He wanted to bring it to them.

“I try to promote the Pathway any chance I get. It’s a great legacy. He had the vision, and we made it happen.”