Choosing Stan State was just the first step toward obtaining an invaluable education, and these scholars are making huge strides, and making a difference, with their academic excellence. 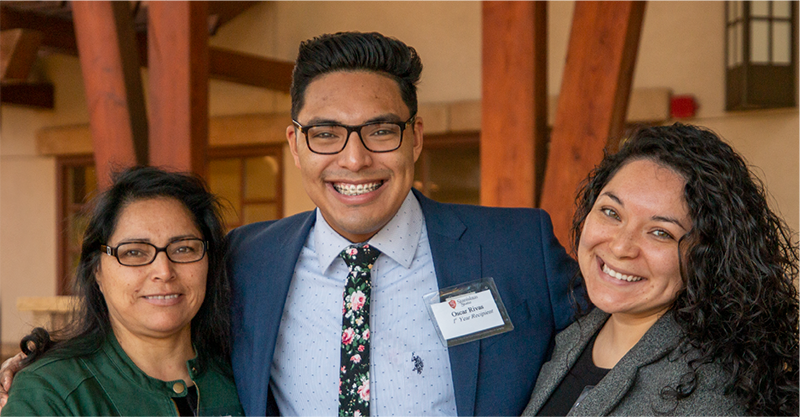 Receiving a substantial scholarship from an organization that has helped hundreds of students improve their lives and communities can be a life-changing experience.

That’s what Stanislaus State business administration major Oscar Rivas discovered when he received his first Mary Stuart Rogers Foundation scholarship. It introduced him to the world of philanthropy and the desire to someday help others.

Rivas is unsure how he will “give back” and admits it probably can’t happen soon, but he is eager to someday start a scholarship fund through the church he attends.

A resident of Modesto and a first-generation college student on track to graduate this spring, Rivas is one of 20 Rogers Scholars 2019-2020 academic year. He came to Stan State three years ago and has been covering his expenses by working 30 hours a week in a Gallo warehouse and, until recently, driving for Uber and Lyft.

Rivas hopes to move up the ladder at Gallo and believes Stan State has prepared him with an education that combines quality with exposure to actual business practices in local industries.

“In the business school, they have professors who have experience in the field, so it’s not just theory,” he said. “They provide real life examples of how the theories apply in the workforce.” 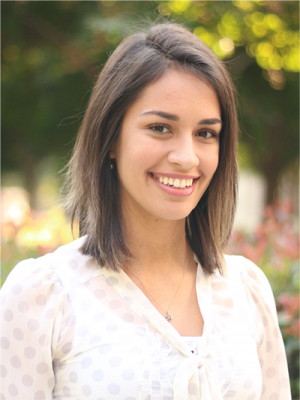 While a student at Turlock High School, Ileana Trujillo dreamed of attending a large university. But during her first quarter at UC Santa Cruz, which has nearly 20,000 students, she learned that bigger isn’t necessarily better.

The campus seemed massive to her. Feeling homesick, she called her older brother for advice.

“He said, ‘Come home, go to Merced College, then go to Stanislaus. It will be completely different at Stanislaus.’”

She took his advice and is glad she did.

“The classes here are way smaller, and I’m much closer to my professors. That makes all the difference for me,” she said. “Here, if I’m having trouble with the material in a class, I can just talk to the professor before or after class.”

A psychology major with minors in biology and chemistry, Trujillo is a second-year Rogers Scholar and is participating in the Honors Program. She plans to graduate with a bachelor’s degree in fall 2020, then pursue a master’s degree and a career as a genetic counselor.

She may end up at a larger university for her post-graduate work, but says she is probably ready “to leave the nest.”

“I’ve learned that nothing is easy in life. You’re faced with challenges and you become stronger when you overcome them,” she said. “It might be scary, but once you overcome that, you learn so much and you’re a stronger person.”

Yang’s Art Becomes Her Pathway in a New Country 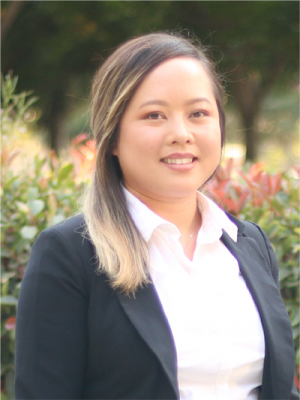 Ten years ago, Stanislaus State art major Ia Yang left her home in Laos and moved to Merced knowing practically no English — just the alphabet and the words yes and no. Today, she speaks English and three other languages fluently and plans to become an art professor.

“I want to teach art because I want to be a role model for other artists. I want to encourage them to follow their dreams and believe everything is possible,” said Yang.

A Rogers Scholar on track to graduate in fall 2020, Yang left behind a hard life in Laos. There, her family worked their small farm to feed themselves and earn a little money selling vegetables.

Once here, Yang picked up the English language on the internet and by socializing only with English-speaking friends. By high school, her English was good and her innate artistic talent had clearly emerged.

She entered and won a few art contests. Then she sold a colored pencil drawing for $300 — a shining moment that gave her confidence as an artist. But when she came to Stan State, she put her passion aside and declared nursing as her major.

“I was scared to make art my major, and I knew nursing would be a good profession with stable jobs,” she said. “Then I took an art class and remembered it was my true passion. It was a tough decision to switch from nursing to art, but I decided to follow my dreams and my true passion.” 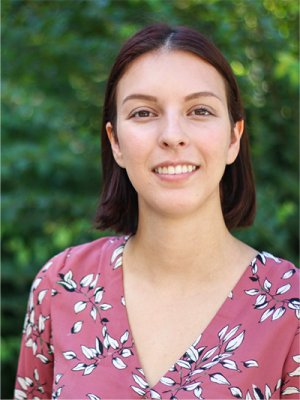 “I knew I wanted to do something more science based, Van Hoogmoed said of switching gears while at Fresno City College. “Then, that same year, my dad got diagnosed with terminal cancer. It was eye-opening for me, but there’s thousands of dads everywhere getting diagnosed with cancer. I want to do more than just support my dad. I
wanted to support everyone else.”

Now a third-year computer science
major at Stan State, the Madera native has her eye on using technology for medical research.

Van Hoogmoed will advance her studies toward that end as a McNair Scholar. She is already thinking about UC Davis as a graduate school destination with a goal of conducting research.

Desire to Giving Back Drives Martinez 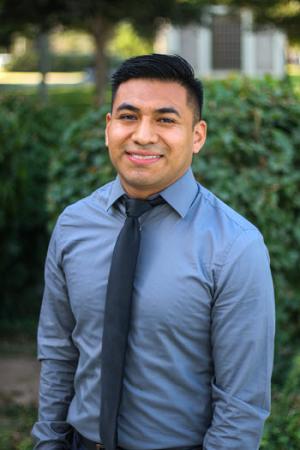 Fernando Martinez arrived in the United States from Mexico at the age of 10. He knew neither English nor Spanish, having come from a village that speaks Mixtec, an indigenous dialect.

As a teenager he worked side-by-side in the strawberry fields of Santa Maria with his parents.

Not only did Martinez leave those fields to obtain an education at Stanislaus State, he’s preparing to enroll in graduate school as a McNair Scholar.

The McNair Program, named for the physicist-astronaut who was killed in the 1986 Challenger disaster, provides financial and other support for first-generation and underserved college students to apply for and be accepted to graduate school.

“My ultimate career goal is either to become a counselor in K-12 or higher ed,” the senior psychology major said. “The main reason is because being the first-generation student, my parents are agricultural workers and never really had an idea or advice for me to pursue higher education. All they knew was work.”

A counselor at Santa Maria High School encouraged Martinez and now he hopes to someday return there, support his parents and guide the next generation of students.

“I feel like me being the first one to attend a four-year college and graduate and pursue higher education will allow me to educate those who are in my shoes,” he said. 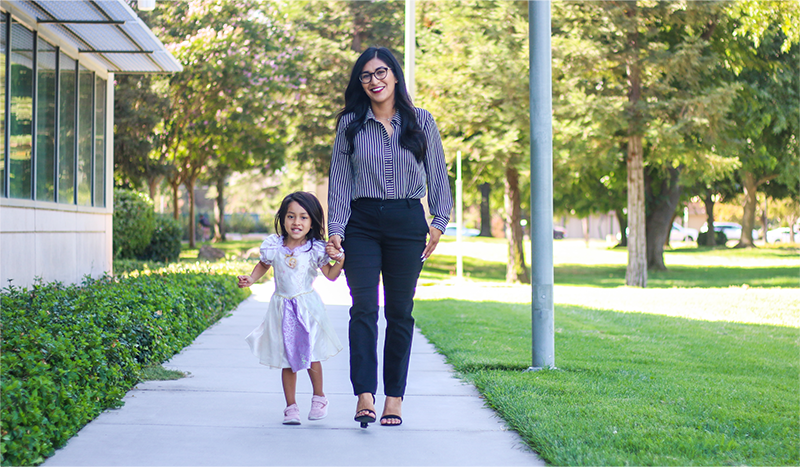 A mother of three, Joana Alfaro returned to school after deciding to stay home and enjoy all the first milestones of her youngest child, having missed them with her other two because she was working.

Alfaro is now achieving milestones of her own, studying sociology and contemplating graduate school as a McNair Scholar.

“I plan on working against the stigma we’ve created on mental health and veterans,” Alfaro said. “I want to pick topics that will hopefully open up some doors for these veterans: PTSD, suicide, these are all things we need to be talking about more. They’re really important to me.”

Alfaro is the wife of a U.S. Navy veteran who has seen PTSD first-hand.

A 1993 immigrant from Mexico, Alfaro didn’t even consider college when she graduated from Delhi High School. Now a U.S. citizen, she enrolled in college at her husband’s urging.

That the first-generation college student is now on a path to graduate school through the McNair Scholars program seems unfathomable to the one-time agriculture field worker.

“When I first read all the requirements and you needed letters of recommendations from professors I thought, ‘Little me, I can’t do that. Who was going to speak for me?’ Alfaro said, tears brimming. “I asked two professors from Merced College. Right away they had letters of recommendation that spoke so beautiful of me. I thought, ‘That’s awesome. That’s Me?’ I didn’t realize they saw me the way that they did.

“Doing the application, I doubted myself. I think I always doubt myself. I don’t want to say I deserve it, but yes, I worked hard for where I'm at. It doesn’t feel real, doesn’t feel like it’s for me. Here I am filling out an application to get me into graduate school. ME? It’s very surreal the thought of me and graduate school being in the same sentence.” 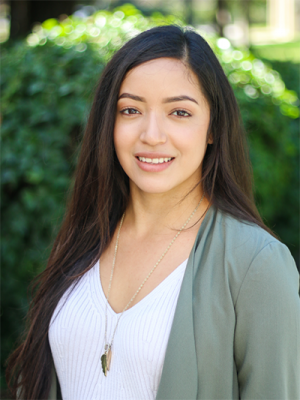 On the day Juana Nieto Vazquez was set to interview for migration from Mexico to the United States, an opportunity her father had worked on for years as he toiled in California to support his family, tragedy struck.

Her father died suddenly. Nieto and her mother considered remaining in Mexico, but family convinced them to make the move her father had worked to achieve for them.

Plunked in a new place where she didn’t speak the language, Nieto found support at Atwater High School and not only worked her way into Stan State, where she’s a third-year student majoring in psychology, but also a McNair Scholar, preparing to enroll in graduate school.

“I would like to provide services to people, resources, guidance for them,” said Nieto, who currently tutors migrant students in programs that helped her when she first arrived in Atwater at 14. “I want to make an impact on people. I would like to work in a school, but I don’t know for sure. I was thinking about becoming a school psychologist, but I took a class here, Psychology 3000, and I like how they conduct studies.”

Research is part of the McNair Scholars program, and that she was selected for the prestigious group doesn’t surprise at least one of her supporters.

“I had a teacher (at Atwater High School) whose name is Mr. Gutierrez. He still teaches ELD. He made me believe in myself. He told me one time he wanted to see me graduate, from high school, but also from a university.”