When I was an undergraduate, a philosophy professor of mine encouraged me to reflect on what I loved to do most in the world and then determine how I could get society to pay me for it.  What did I love?  To talk with people about interesting idea--to creatively examine life, meanings, truth, and our assumptions about reality and values.  That pretty much sums up my challenging career at Stanislaus State.  I came here in 1990 after being an Assistant Professor at Muhlenberg College in Pennsylvania.  I became a Full Professor in 2001, and at this point (2017) I’ve enjoyed more than two decades of talking to people about interesting ideas (three decades, if I count graduate school at the University of Florida and the University of Colorado). 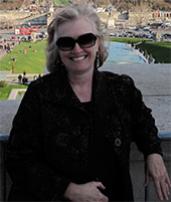 Typically I teach Philosophy through Literature, Existentialism, Philosophy and Feminism, Society and Gender, and Introduction to Philosophy, but I have also taught Theory of Knowledge, Philosophy of Art, Philosophical Inquiry, Philosophy of Home, and Twentieth Century Philosophy.  I focus on contemporary continental approaches to philosophy.  These courses jibe with my research interests, which can be loosely categorized into two pathways: 1) feminist philosophy as it pertains to sexualized trauma and selfhood, and 2) creative writing.

1)  My current project is a book entitled Domesticated Violence: Traumas to the Self.  I seek to question and analyze many assumptions in current research about familial sexualized violence, specifically assumptions about selfhood and healing.  Many leading thinkers in the area (such as Michel Foucault, Judith Butler, Kelly Oliver, Jessica Benjamin, Jane Flax, and Ladelle McWhorter) call into question conceptions of the self as an autonomous, unified, self-contained being, rooted in a pre-discursive core ‘truth’ about who we are.  Often such deconstructions of the self favor a more indeterminate relational or dialogical conception of self that is co-extensive with others and ones situation within the world, a more fluid sense of self that can be variously open and closed.  How we conceive of selves affects how we think of physical, emotional, and sexualized damage done to people, specifically children in problematic families, as well as how we think of, and encourage, healing from such damage.  As such, it is important to analyze conceptions of selfhood embedded in psychological literature in order to re-examine and bring about conceptions of selfhood that are more conducive to understanding experiences of childhood trauma and its effects on adults.

I hope to build a better bridge between philosophy and psychology.  Deconstructive approaches in philosophy have not been adequately understood and could offer valuable insights in psychological concerns of mental health.  As well, philosophy could benefit considerably from recent development in relational, intersubjective psychology, attachment theory, and neuropsychological research.  I hope to make the philosophical issues more accessible to a wide variety of readers, especially people involved in social practices of healing, in order to encourage dialogue between disciplines and practices.  I also hope this book can be responsive to adults who are coping with traumatic pasts, serving as a companion to existential struggles.

2)  I have recently completed the final version of my novel, Infinite Distances, a novel exploring philosophical themes of loss, intimacy, truth, and differences between people who orient in the world with conflicting values.  In the novel, Kate Mullen’s best friend, Annie, dies suddenly, leaving behind journals of her unconventional life and an explosive secret hidden from almost everyone in her life.  As Kate copes with grief over Annie’s death, betrayal from Annie’s secrecy, and the unraveling of her own marriage, she struggles to protect the secret from Annie’s ex-husband and abusive family.  The novel raises several questions:  How well do we know even our closest friends?  Is it possible to know the truth about past experiences in the face of conflicting accounts?  What does one owe an abusive family? How responsible are we for others?  What are the costs of either living for safety or risking a life of unconventional possibilities, however perilous and unpredictable?

Since moving to the bay area, I have taken several classes and workshops in creative writing at UC Santa Cruz and UC Berkeley.  I am currently in an on-going writing workshop directed by Monica Wesolowska, author of Holding Silvan, a memoir.  I am in the process of finding an agent for Infinite Distances.

For fun I explore whatever the bay area has to offer.  I can often be found at local venues listening to my partner’s band, Vandella.  Mostly, I love to read outside on the balcony and write in the attic.  For many years I served on the Board of Directors for the Haven Women’s Center in Modesto and led numerous training sessions on diversity for volunteers.

Ph.D. University of Colorado, 1988
Dissertation: "The Act of Understanding and the Possibility of a Critical Hermeneutics" focusing on Heidegger, Gadamer, and Ricoeur

Pushkin Institute of Foreign Languages and the University of Leningrad, 1976; Russian Language and Culture

"Protecting the Self:  Reconsiderations of Self and Vilence," presented to GEND 3000, Contemporary Gender Studies Research class, 2016

"Negotiating Fragmentation: Healing Sexual Violence," for the American Society for Philosophy, Counseling and Psychotherapy, at the APA, Berkeley, California, April 2, 1999.

"Talking Oneself into Being: Domestic Violence, Autobiography, and Self Construction," The Second International Congress on Philosophical Practice, Leusden, The Netherlands, August 28, 1996.

"Controversies in Postmodernity and Feminist Politics," Invited Speaker for the Women's Center and Philosophy Club at the University of Seattle, Washington, April 18, 1995.

Introduction to Philosophy (PHIL 1010) -- either with a focus on selfhood or on social/political philosophy (Plato, Descartes, Hume, Nietzsche, Sartre, Friere, Marx, Freud)

Philosophy and Feminism (PHIL 4600) -- Recent feminist theory, mostly focusing on U.S. feminists. Last semester I taught this with an eye towards autobiographical theory and constructions of gender through autobiography.

Society and Gender (GEND 3550) -- generally a course showing how gender (along with race and class) is implicated throughout our cultural concerns of education, socialization, media, law, language, the family, the workforce, intimate relations, and violence.