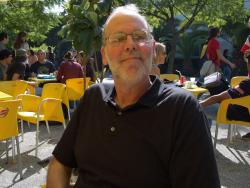 Geoffrey Mulder joined the music department at California State University, Stanislaus in 2001. He teaches Music History and Music Technology. He holds a Bachelor's Degree in Music Performance and Master's Degrees in Performance and Music History from Roosevelt University in Chicago. His violin instructors have included Elaine Skorodin, Samuel Magad, Philippe Greenberg, and Angel Reyes. While in Chicago, Mr. Mulder was in frequent demand as both a soloist and a chamber musician. His performances since coming to the West have included colleges and universities in Wyoming, Nebraska, and Iowa, as well as an invitation to perform at the Governor's Mansion in Cheyenne, Wyoming.

Mr. Mulder’s interests in popular music have resulted in the commercial release of a recording of Blues music with his group, "The Sons of Blues," and invitations to perform Jazz and Blues at the Yellowstone Jazz Festival. His past performances with various celebrated Jazz musicians from around the country have earned favorable reviews and have been broadcast on Montana Public Radio.

Prior to coming to California, Mr. Mulder served on the faculty of Northwest College in Wyoming and St. Xavier University in Chicago. He also served for ten years as a member of the Billings Symphony Orchestra. Past orchestral appointments include principal chairs in the Lake Forest Symphony, Civic Orchestra of Chicago, Dubuque Symphony, and as Concertmaster of the Chicago Chamber Opera and Westminster Chamber Players.