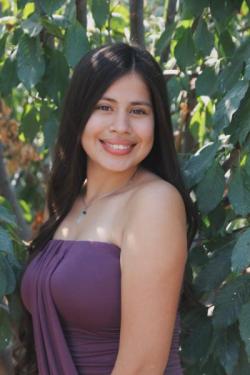 My name is Auzrhia Padama, I am a member of the Chippewa Cree tribe, located in Rocky Boy, Montana. However, I grew up in Porterville California, with the Tule River Yokuts. I am also a first-year student and first-generation here at Stanislaus State. I am enrolled in the Introduction to Indigenous Studies course with Dr. Cueponcaxochitl. I will be sharing with you a dance about the life of an eagle, as the eagle is the messenger from the creator, this dance is also seen as a blessing and also to bring rain in the time of need. In both middle school and high school, I was the leader of my Cultural team, for Native Americans, where we would show children K-6 about the Native American Culture. I would like to share my dance with the greater community becuase I would like to bring more awareness to how Native Americans are still here and we are still important, mainly to help to show that my culture is still alive, and to persuade others to have pride from who we are, and what we have come from, after all that Native Americans have been through. I hope that people who experience our dances will be inspired and touched by seeing a culture that is dying out is still here, and to have more courage with what they believe in. We have a voice, and we will not be silenced anymore. My dance is to show how proud I am of my culture, and I will not be ashamed of who I am, and nobody can take that away from me. 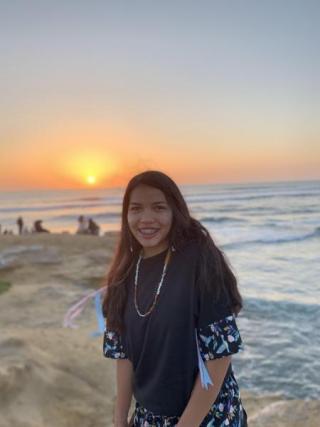 My name is ToniMarie Dominguez and I am a member of the Santa Ysabel Reservation Band of the Kumeyaay Natives in San Diego, California. I am also Kumeyaay from a tribe known as San Antonio Necua located in Ensenada, Mexico. I am a first year student at Stanislaus State. I am enrolled in the Intro to Indigenous Studies course with Dr. Cueponcaxochitl. I will be sharing Peon and Bird songs that the Kumeyaay people sing during our social gatherings, mourning ceremonies, and special events. These songs I am singing are powerful songs that explain togetherness, as well as our journey on this earth. I want to share my songs with the greater campus community because I take pride in my culture and traditional ways  that were passed down to me from my parents and grandparents and someday will continue to be shared with my children and grandchildren along with generations to come. I hope that people who hear my singing will feel open and inspired. I hope to encourage everyone to express themselves and stand up and be proud of who we are as Native and Indigenous people.

Indigenous Students in Activism is a student-led club that started from the community we built in Ethnic Studies 2300: Introduction to Native American and Indigenous Studies course during the fall of 2018. We built a community around learning about Indigenous resistance in our community and within ourselves. We initially started to spread awareness about Stanislaus State being on the land of the Yokut Nations. We are just beginning to develop a relationship with the Northern Yokut Nation, Nototomne Tribe. President Junn recently read an Indigenous land acknowledgement statement during her Fall 2019 address. This was as a result of our collective organizing with students, faculty, staff and administration. We are proud of this work. We are currently also creating a community garden in the Bio-Ag area and continuing with a Transformative Tuesdays movement. We invite you to join our work for Indigenous issues on campus and beyond. 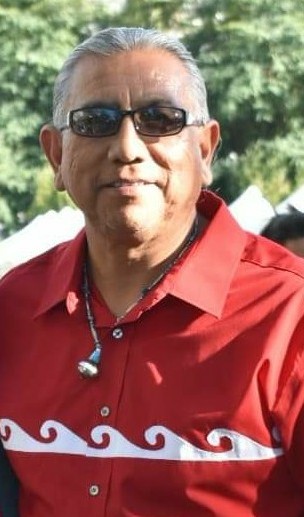 Shannon Rivers is a member of the Akimel O’otham (River People), he was born and raised on the Gila River Indian Community located in southwest Arizona .

In 2008 Shannon was selected as a co-chair for the Global Indigenous Peoples Caucus, holding the seat for two consecutive years. Shannon has conducted and hosted lectures on the United Nation Declaration on the Rights of Indigenous Peoples (UNDRIP) at the State Capital of Arizona and for numerous colleges and universities in Arizona, California, New Mexico and Internationally.

He has participated in political and social justice actions in Central and South America. Shannon, was instrumental in assisting the implementation of the UNDRIP. Additionally, Shannon played a crucial role in assisting two local Arizona Indigenous Nations in adopting the UNDRIP into their constitutions (Gila River Indian and Salt River Pima Maricopa Indian Community).

Currently, Mr. Rivers is a Native American Cultural/Spiritual Leader and advisor to the Indigenous inmate population(s) at the County, State and Federal Prison(s) in Arizona and Central California.He holds a Bachelor’s of Science Degree from Northern Arizona University, and a Masters in American Indian Studies from the University of California Los Angeles.

Lastly, Shannon is a cultural ambassador for the O’otham Humackam (Peoples Nation) for the four O’otham Nations located in southern Arizona and Northern Mexico. 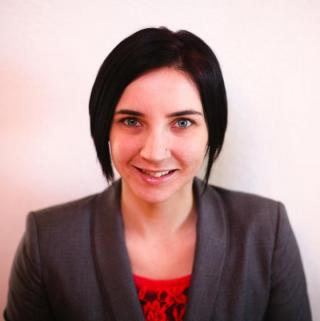 Nicole Blalock is a mixed-heritage activist scholar whose research and creative work incorporates her interests across broad fields. Her research background is largely interdisciplinary, exploring contemporary society and how its policies and practices influence learning and achievement. She is also interested in issues of representation, identity, and the tensions of tribal memberships, sovereign nation-to-nation politics, and decolonization.

Nicole’s creative space includes experimentation with multidisciplinary practices. Most recently, she has begun a journey using art to explore historicity and herstory of a mixed-Indigenous paradigm, building from her work while an academic scholar. Nicole continues to develop and enrich her understanding of critical issues in society through the lens of her academic, professional, and personal experiences.

Currently, Nicole is developing an interdisciplinary digital history project on the intersections of mental health and Indigenous policy exploring the Indian Medical Service’s Mental Hygiene Clinic of the 1930s. She continually pushes the boundaries of her research praxis, incorporating multiple and novel methods to demonstrate existing trends and elucidate approaches to support Indigenous education and schooling success.

Nicole received her dual M.A. in Native American Studies and Ph.D. in School Organization & Educational Policy from the University of California, Davis in 2013. In 2015, she completed a two-year Fulton Post-Doctoral Fellowship in Educational Equity in Diverse Schools with the Mary Lou Fulton Teachers College at Arizona State University. 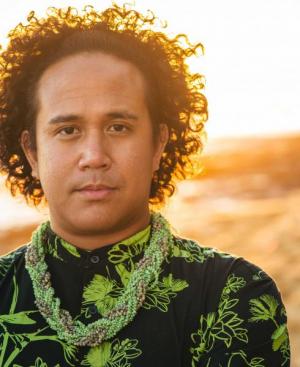 Known for his work in celebrating the intersection between Hawaiian music and choral performance, he is the artistic director of Nā Wai Chamber Choir, a professional vocal ensemble based in Hawaiʻi dedicated to the preservation and propagation of Hawaiian choral music. Under his direction, Nā Wai has commissioned and mentored emerging Native Hawaiian composers and conductors, toured throughout rural Hawaiian communities, and led workshops on the performance of Hawaiian choral music at schools and universities throughout the country.

His work in preparing choruses and as a festival clinician are vast, resulting in performances at Carnegie Hall, Lincoln Hall, The Oregon Bach Festival, Old South Church (Boston), Church of the Holy Trinity (Philadelphia), La Madeline (France), and the Harrogate Music Festival (UK).

Dr. Saplan’s research focuses on the performance practice of Queen Lili’uokalani’s choral compositions; multicultural perspectives in the choral rehearsal; intersections of choral pedagogy, gender, and sexuality in communities of color; and Native Hawaiian agency in music. His scholarship on these topics have also led him to lead clinics at the state, regional, and national level for the American Choral Directors Association, National Association for Music Educators, National Collegiate Choral Organization, and the LGBTQ Studies in Music Education Conference. He is a frequent clinician and adjudicator for state, regional, and national conferences and festivals.

Grow Your Own Food: Ancestral Foodways and Identities 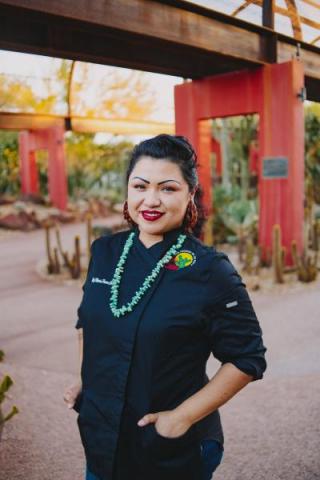 Chef Maria Parra Cano is owner & mami-preneur of Sana Sana Foods and Indigena. Maria is a Xicana Indigena born in Phoenix and grew up in Barrio Garfield along with her siblings. Maria received her undergraduate degree from Arizona State University, her MBA from Grand Canyon University and a culinary arts degree from Scottsdale Culinary Institute - Le Cordon Bleu. Maria is a mother of 4 with her oldest being 6 and the youngest being 1. She is married to Brian Cano who is the artist & soul behind Ironwood Metal Works & Coatl. Maria is a mother, wife, sister, aunt, community organizer, danzante y mujer de ceremonia as part of the Calpoalli Nahuacalco and other ceremonial circles. Maria is the Executive Director of the Cihuapactli Collective, co-founder MEChA de ASU’s Xicana/o Graduation and board member for the Sagrado in South Phoenix.

Sana Sana, is a plant-based movement aimed at healing our community from diseases like diabetes and hypertension through food. Maria was taught to cook at a very young age by her mother, Maria Cristina Parra Martinez and learned about indigenous cuisines from Central and Southern Mexico. Maria has been working with local community groups to expand their knowledge of ancestral/traditional foods by providing community cooking classes, demos and workshops. 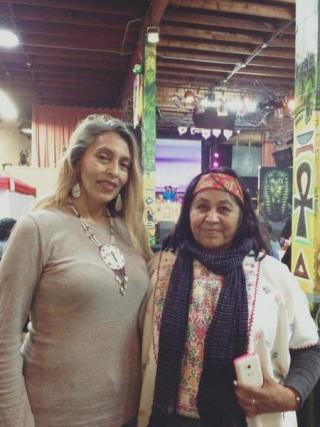 I am originally from Totimehuacán PueblaI was born on May 5, 1954. It is a place corresponding to a lord of Cuetlaxcoapan (Puebla) after the Spanish invasion.It was the beginning of the Aztec settlements and the place of the Tepalcayoc pyramids. The language of my ancestors (parents) was Nahuatl.

It was only to get the approval that I already had for ancestral inheritance. Because during this time it was persecuted and satanized, I was an activist since college so that our culture would not be buried and I organized various events of this nature to show dignity of my culture and receive respect. CPU was also for the defense of the land, natural resources and our culture, raising the struggles throughout the Mexican territory and of which I was a founder. We coordinated several events such as the National Holiday of the Medicinal Plant held in several states from the country. As a result, we rescued indigenous medicine healing. We were speakers at the Mexican ethno-biological association that brings together several researchers from several universities in the country