Who's invited
Open to the public

Nahuatl Studies on Zoom with Professor T. Tezozomoc Sandoval is a cultural experience in itself. The study group examines the rules of classical, Nahuatl grammar and also 16th and 17th Century, Nahuatl documents. Nahuatl is one of the original languages of Mexico and the most spoken indigenous languages up to this day. Some Nahuatl original words that are part of Mexican Spanish are: tocayoh, chiquihuite, pozole, papalote, popote, mole, chapulin, taco, molcajete, tamale, guacamole, and so many others. The study group also explores contemporary Nahuatl songs. Of special importance, however, is the “in xochitl in cuicatl” (flower and song) ancient, Mexican poetry found in the Cantares Mexicanos and the Romances de Los Señores de la Nueva España and other sources. As related by Miguel Leon-Portilla, flowers were considered symbols of beauty that by themselves whither away and die, but when you tie a flower to a song, it becomes everlasting! It is a shame, in my view, that very few people, even those of Mexican and Central American descent, have no clue that this literature exists. The Nahuatl grammar used in the study group is, for the most part, James Lockhart’s Nahuatl as Written, but also Llave de Nahuatl by Maria Angel Garibay, the Compendium of Nahuatl Grammar by Thelma Sullivan and J. Richard Andrews Introduction to Classical Nahuatl. It is recommended to purchase a Nahuatl dictionary. There are, however, electronic dictionary sources available. Below are some very useful dictionaries. Study groups are held on Zoom every Sunday between 11 am and 12:30 pm and on Thursdays between 6 pm and 7:30 pm till Sunday, May 30th, 2021. Tla xihualla Tlacah!

Bierhorst, John. A Nahuatl-English Dictionary and Concordance to the Cantares Mexicanos, with an Analytical Transcription and Grammatical Notes. Stanford University Press, 1985. 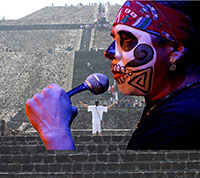 I am a cuicani (performance poet) and a Xican@ Studies professor. The reason I became a cuicani and eventually transferred from East Los Angeles College to the University of California at Los Angeles (UCLA), obtaining one degree in Chican@ Studies and one degree in Sociology, and a Master’s degree in Chican@ Studies from California State University at Northridge (CSUN), was because of a quote by Gandhi. “Live like you’re going to die tomorrow and learn like you’re going to live forever.” I took it to heart and began to read only things that interested me and were relevant to me, because up until then nothing I was shown in elementary, junior high, or high school captivated me. I, fortunately, learned, from a book of poetry that Mexican meant indigenous; and that the true language of Mexico City was/is Nahuatl. I began to understand that Mexican was Mexica (meh-shee-kah), but also Olmec, Zapoteco, Yaqui, Chol, Maya, Huichol, Mixtec, Purépecha, and all the other indigenous aspects of Mexico and even Central America. I also understood that Anahuac was the original name of Mexico and Central America. It inspired me to want to learn about history, and about myself like no other time in my life; however, it also, about indigenous languages, especially Nahuatl. It was my process of becoming a scholar.

I was not even going to return to college at the age of 27; however, I knew I could never become a teacher or a professor without obtaining the necessary degrees and going to college or the university. I was so determined, by the time I let a counselor look at my grades she said, “With these grades, you can go to any university that you want.” I have read that the Mother tongues of anyone’s ancestors have to power to coerce the mind to correct itself. In short, I have been studying Nahuatl and Nahuatl grammar for more than 20 years. I wish to share what I have learned about the beauty and grammar of the most written about and studied indigenous language of the Americas, Nahuatl.