Aimee Tatum (as a devil) and Laurie (as a witch).

Kindness, generosity and a zest for life are the characteristics friends and colleagues use to describe Laurie Marroquin, who died suddenly at her home on March 1. She was 46.

Marroquin, from Lodi and a Stanislaus State graduate, worked in the University’s Financial and Support Services beginning in 1999. Most recently, she was an accounting technician, in part responsible for student accounts receivable and cashiering. In that role, she helped students maneuver the financial obligations and challenges of getting an education.

“She was always talking to students on the phone, and she was so patient with them,” said colleague Aimee Tatum, an accountant, whose desk was near Marroquin’s. “She would work to get them to where they could pay their balances. She worked hard. She was always patient, even comforting.”

When students came in person, they found a welcoming dish of candy and decorations for a holiday or season.

“Yesterday morning I was in the office and I saw someone had cleaned her desk. There were eight or nine boxes of decorations for Halloween, Christmas, Easter everything,” said Roubina Yadegarian, an accountant who also worked near Marroquin. “She had already decorated for St. Patrick’s Day before she passed.”

Her holiday zeal was contagious. 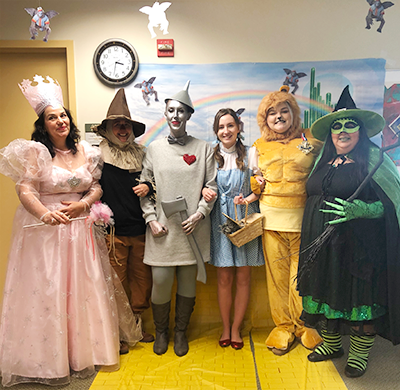 “She was into Halloween and dressing up,” Tatum said. “She always tried to get the whole office to do it. Stan State does a Halloween costume contest, and she got us to dress up, and the last one they had, we won. We did ‘The Wizard of Oz.’ Laurie was the Wicked Witch. I was the Cowardly Lion. Our student assistant was Dorothy. We had a Tin Man and Glinda and a yellow-brick road on the floor.”

Marroquin loved having fun, whether joining colleagues for a bowling night or heading to a casino, where she loved to play slot machines. Tatum joined her on several trips to Black Oak Casino in Tuolumne and traveled to Las Vegas with Marroquin last fall.

“We had the best time,” Tatum said. “We walked around, went to different casinos, went to the Titanic Museum and did all the touristy things.”

“She loved to go out for her birthday, and a week or two before, she’d start saying, ‘in two weeks it’s my birthday,’” Yadegarian said. “I would invite her to lunch, and she would choose the restaurant. For two weeks, every day she was going out to lunch with someone for her birthday.”

Marroquin also loved to travel. Last year she went to Hawaii, and she’d visited Rhode Island to see her sister, Lisa, and young niece Abigail, whom friends said she adored.

“She was always living her best life,” Tatum said.

Marroquin also was committed to her work and her colleagues.

“She started in the department as a student, worked in cashiering and then moved to student accounts receivable and thrived in that position,” said Regan Linderman, associate vice president for Financial and Support Services.

Her favorite position, though, may have been advisor of Stan State’s Latina-based Phi Lambda Rho sorority, of which she’d been a member.

“I know the sorority is going to miss her,” said Julie Anaya, coordinator for student organizations and fraternity/sorority life. “Students connect with their University when they see members of their organization are still connected to the University, still working for it. It gives them someone to go to when they need help.”

Marroquin was there for the good times, too, by showing up to support the sorority at all its events. She mentored members and arranged for them to meet women executives. Linderman recalled meeting with sorority sisters at Marroquin’s request.

“Laurie was one of a kind,” said Ivette Paz, who knew Marroquin for nine years through Phi Lambda Rho. “She was always there to lend a helping hand. She was not the type of person to judge anyone. Instead, she would hear you out. She was always down for an adventure. Laurie will be truly missed.”

“Laurie was always there for the ladies of this sorority,” Urban said. “Some sisters graduated and left, but Laurie stayed. You can go up to any sister, and she will be able to share how impactful Laurie was to their life. She was the sorority’s No. 1 supporter. She was the first one to lend a helping hand. She’s the type of person that wouldn’t need to say anything, but her presence was known. She’s going to be greatly missed, but never forgotten.”