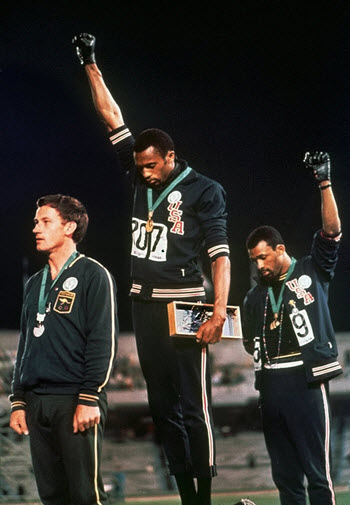 When record-breaking track and field athlete Tommie Smith raised his glove-covered, clenched right fist after accepting the gold medal for the 200-meter dash at the 1968 Mexico City Olympics, he insisted it wasn’t a “black power” salute but a human rights salute. A “silent gesture,” he’s explained in numerous interviews, intended to call attention to racial disparity, especially toward African Americans in the United States.

The iconic demonstration led to Smith’s expulsion from the Olympic Games that year because it was deemed to have promoted disrespect for the American flag rather than being an act of solidarity with the civil rights movement.

The controversy didn’t stop the world-class athlete from continuing to set seven individual world records in the sport, from becoming an NFL wide receiver, or from being inducted into the National Track and Field Hall of Fame. It also didn’t prevent Smith from sharing his experiences with his students while working as a college track and field coach and social science teacher, nor did it stop him from delivering his most memorable message of all during speeches at college campuses: “Your life begins to end the day you become silent about things that matter.”

Smith will speak at Stan State on February 28 in conjunction with the University’s observance of Black History Month. His visit was sponsored by the Stanislaus State History Department, Office of the Provost, College of the Arts, Humanities & Social Sciences, Warrior Athletics and the President's Commission on Diversity and Inclusion.

“I think it’s important, especially for our African-American students on campus, to hear from someone who took a serious, definitive stand and participated in activism long before the days of social media, because activism is a lot more than sending a tweet or posting to Instagram,” said Marvin Williams, advisor for Stan State’s Black Student Union. “Competing in the Olympics and taking a stand like he did put the civil rights struggle on the map. It brought it to an international stage and made it visible for everyone.”

His presentation, “The Power of a Dream,” will focus on why it is important to give voice to critical issues.

“I think that message is so inspiring because if you stay silent you won’t see any improvement in whatever it is that you want to be changed,” said Black Student Union President Christen Wynne.

Smith’s appearance is only one of many outstanding and important events Stan State will host throughout February to honor and recognize Black History Month.

“I’m hoping students will gain a better understanding of black culture. Not only our hardships, but our successes and our achievements,” added Wynne.

“This is our long-time legacy and who we are as a collective and it’s really important to recognize that and come out and celebrate that,” said Roaf.

As part of the day-long series of events, Roaf said, actress Valerie Holmes will present an interpretive program called “Angela’s Story,” which shines a light on a woman who was among the first enslaved Africans to arrive in colonial Jamestown.

Very few accounts of enslaved persons exist in conventional public records. “Angela’s Story” is based on Holmes’ exploration and research of the middle-aged woman given the name Angela, who was among the 30 or so Africans who arrived in Virginia in 1619.

“Our aspiration is to acknowledge the historic trajectory of African Americans that run the gamut from 1619 to 2019, which marked the 400th anniversary of when the first enslaved Africans were brought to mainland North America,” said Roaf.

Follow the link below for a full listing of Black History Month events taking place on campus, hosted by numerous departments and programs.