Earning a college education is not an easy task for anyone, but it can be more challenging for students with visual impairments.

That journey got a little smoother, though, for three Stanislaus State students who each were awarded a $10,000 Dale M. Schoettler Scholarship for Visually Impaired Students.

Jose (JC) Aguirre, Morgan Jacobs and Jon Able, were among 39 California State University students to earn the scholarship for the 2020-21 academic year.

“This is great for our campus,” said Therese Gardner, an advisor in Disability Resource Services (DRS), who joined the Stan State community in June after previously working for the State of California Department of Rehabilitation, mostly with visually impaired individuals.

She wasn’t on the job long when she learned of the Schoettler Scholarship and made sure students applied. The process was quick with students applying over the summer and learning of their award in October.

“They all are motivated about succeeding in college,” Gardner said. “They’re passionate about their career paths. One is looking to be a teacher of history, hopefully at the college level, one wants to be a psychologist and one is looking to become a microbiologist.”

The scholarship, awarded to students with visual impairments who maintain a minimum 2.8 GPA and carry at least 6.1 units of study, began in 1991 for students at San Francisco State and San José State by Dale Schoettler, a Mountain View-based businessman with a visual impairment.

Upon his death in 2001, the CSU received a $4.8 million bequest from his estate to expand the scholarship to students at all 23 CSU campuses.

Here are the stories of the three Stan State recipients:

Growing up in the Central Valley, JC Aguirre did not have the typical childhood and teen experiences. 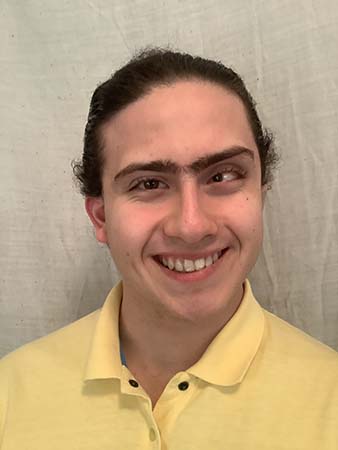 A visual disability required that he spend a lot of time at doctors’ offices, which made it impossible for him to participate in public schooling. His only option was independent study through a charter school.

Aguirre often walked or used public transportation to attend medical appointments, and he took advantage of his time on buses by studying and doing homework, which allowed him to achieve his ultimate goal of obtaining a higher education.

“I did my homework everywhere I went,” he said. “This experience taught me to self-motivate.”Aguirre accomplished his goal of becoming a first-generation college student by starting classes as a Stan State freshman last fall. When deciding which school to attend, he said Stan State stood out from the rest of the colleges he considered.

“I decided to go to Stanislaus State because it is a better fit for my needs and has a well-established and respected science department,” Aguirre said.

Since coming to Stan State, he has become a member of the Honors Program and DRS, as well as one of the first recipients of a Stan State President’s Central Valley First-Generation Scholarship. He says he is grateful for the opportunities Stan State has offered him.

“Stan State is providing me with knowledge to advance my learning to the next level and the training and experience I need to engage in professional research,” he said.

Aguirre is on track to graduate in 2024 with a bachelor’s degree in biological sciences. He also is considering a minor in business administration.

Although Aguirre’s tenure at Stan State is still new, he has already achieved much while continuing to overcome his disability. For his accomplishments, Aguirre was awarded a Dale M. Schoettler Scholarship.

“For me, this scholarship means that I have been chosen to represent people who have vision impairments in the advanced science fields,” Aguirre said.

The opportunities he has been afforded by the Honors Program and scholarships have allowed him to focus his attention on his courses and his future. He also appreciates assistance he has received at Stan State, specifically from DRS Director Marvin Williams and Disability Services Advisor Therese Gardner, who both have extensive experience in providing accommodations for students with disabilities.

As for his future, Aguirre hopes to continue participating in biological research to benefit the community.

“I would like to start my own biotech company here in the Central Valley, specializing in bacteriophages (viruses that only eat certain strains of bacteria), with a focus on agricultural uses,” he said.

And he firmly believes in the importance of giving back. 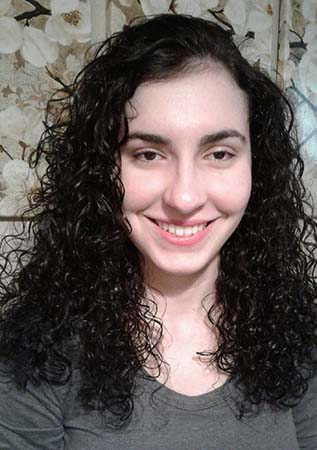 Morgan Jacobs has been overcoming obstacles from the moment she took her first breath.

Jacobs was born prematurely and doctors gave her less than 48 hours to live. She spent the first 113 days of her life in hospitals and had multiple surgeries, including one on an eye and another to treat a serious blood infection.

When she was younger, she was bullied in school and mocked by other students. It made her feel alienated, but her parents always encouraged their “miracle baby.”

“As a young child and teenager, my parents always told me I could accomplish anything I put my heart into,” Jacobs said.

In high school, Jacobs was on the honor roll every year while involved in her school’s choir and drama classes. She also found time to practice some of her favorite hobbies, including reading and playing the piano and guitar.

With the help of the Merced County Office of Education’s Center of Visual Enhancement, a program that helps the blind and visually impaired with everyday life skills, and the Department of Rehabilitation, Jacobs acquired job experience at Hilmar Community Medical Center and at a Walgreens pharmacy.

Jacobs is extremely proud of her heritage and strong work ethic.

“My parents have taught me that dedication and hard work are the building blocks to success,” she said. “Coming from Portuguese and Assyrian cultures, I take pride in being a hardworking, optimistic and motivated individual.” Jacobs’ accomplishments as a young adult led her to Stan State, where she became the first person in her family to attend college.

Jacobs has been successful in the classroom during her first three semesters and is working toward a degree in psychology with plans to become a psychologist.

“I have vowed to make a positive difference in this world. I want to help people of all races, genders, sexualities and ages,” Jacobs said. “As a psychologist, I can help people with their psychological needs and disabilities.”

Jacobs is involved in several campus programs including DRS and the National Society of Leadership and Success.

Jacobs views earning a Schoettler Scholarship as an opportunity to make the most out of her education and help as many people as she can.

“Receiving this scholarship will not only help me but help everybody I plan to help in the future,” she said.

Overcoming challenges to completing everyday tasks has been an ongoing struggle that Jon Abel knows all too well.

Since becoming legally blind at the age of 19, Abel has faced myriad obstacles, but he learned how to adapt.

“If you spend any time with the blind community of students, counselors, teachers and professionals, you will quickly see this community is extremely motivated, and, in my experience, very much accustomed to solving problems,” Abel said. “It’s a part of our everyday lives.”

Abel became a member of the blind community after a routine appointment with an optometrist for glasses led him to a specialist who diagnosed him with Stargardt disease, a rare genetic disorder. He has partial vision and can get around without using a cane or assistance.

Despite facing countless obstacles, Abel never gave up on his goal of earning a college degree. Being a Dale M. Schoettler scholar means a great deal to him, and he is grateful because it presents numerous possibilities for his academic future.

With the scholarship, Abel, a history major, is considering a double major in economics. He has found a variety of resources available at Stan State, including Disability Resource Services (DRS), which enabled him to obtain text messages in alternate formats and communicate with professors about special needs.

“The team at DRS has been great,” Abel said.  “Therese Gardner is an advisor on campus who has been such a great person to have on my side, and I am thankful for her assistance in my academic journey.”

Growing up in Merced, Abel lived close to the Center of Vision Enhancement, which supports people with any level of visual impairment. Its work to enhance quality of life and provide guidance to independent living for people with visual impairments has benefitted him greatly.

“They have helped me in so many ways, not only to grow accustomed to sight loss, but also to raise the bar of what’s possible to achieve as a person,” he said.

Abel has remained inspired and motivated by the people he has met and who have helped him through his journey. He attended the 2019 National Convention of the National Federation of the Blind, and it left a great impression on him.

“Every visually impaired individual faces some unique challenges, but I have noticed that we are all very motivated and driven,” Abel said. “We are innate problem solvers, as we have to solve problems every day and face challenges every day.”

Abel has discovered through his journey that the visually impaired community consists of extremely high-achieving individuals.

“No challenge is insurmountable,” he said.