Since Joining the University in 2017, Helping Others is Hubbard’s Driving Ambition 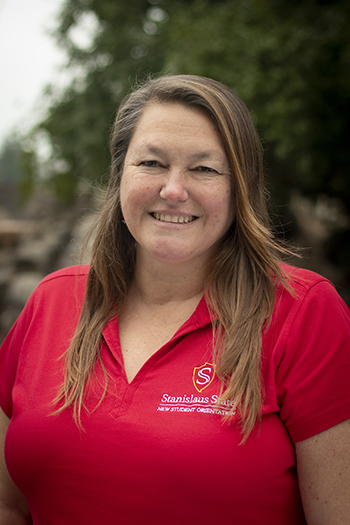 Helping others isn’t just a notion to Stephanie Hubbard.

It’s what gets her up and ready to go every day and makes her ideally suited to serve as Stanislaus State’s director for Student Leadership and Development, a position to which she was named in March.

She began making that difference at Stan State in 2017 when she arrived as a special assistant to the vice president of student affairs to work on special projects. It continued when she was named interim director for Student Leadership and Development in March 2018.

The interim title stuck for three years for a variety of reasons, which didn’t bother Hubbard, but she jokes, “It’s the longest job interview, ever.”

What mattered was the work.

She dived into the role, joining Josh Edrington, orientation and transition programs coordinator, in expanding New Student Orientation to a two-day, overnight event for freshmen and full-day experience for transfer students. She revived the Warrior Leadership Program and created the Dr. Marvalene Hughes Leadership Conference.

“Now I look forward to continuing to build the department, which we’ve been looking to do in terms of our student organizations and engagement on campus, which obviously has been impacted by COVID,” Hubbard said.

She is working with Julie Anaya, who was hired while Hubbard was interim director, to oversee student organizations and fraternity/sorority life, to accomplish that objective.

“(Stan State) students are my absolute favorite students. They are amazing. They’re strong, passionate, smart, deserving and have humility that makes me want to do more.”
~Stephanie Hubbard, Director for Student Leadership and Development

Hubbard’s work toward making life better for Stan State students began in August 2017 when she was hired as the special assistant to the vice president for Student Affairs to help with different projects. Part of that job meant working with Edrington to re-envision New Student Orientation. The other task was launching a diversity center, which was renamed the Warrior Cross Cultural Center in 2020.

“We were almost the last California State University to have a diversity center, and President Ellen Junn had promised to open one within that year,” Hubbard said.

She researched other centers at CSU and University of California campuses and listened to the Stan State community at open forums.

Creating that space using three rooms in the Vasché Library was a perfect task for Hubbard.

“My belief is diversity and social justice have to be at the foundation of what we do in order to begin working toward building a more equitable world, and that is what we should be doing at all costs,” she said.

Hubbard ran the Diversity Center from its launch in November 2017 until the summer of 2018. After being named interim director, Hubbard focused her energies on working with the Student Leadership and Development staff to increase student engagement on campus through new leadership opportunities, support for student organizations and expanded student events.

She and Edrington broadened New Student Orientation and invited representatives from across campus to not only offer counsel and information but encourage student participation in organizations and activities.

“We tried to infuse a sense of belonging and have people understand what it means to be a Warrior,” Hubbard said.

Hubbard’s career was launched in the residence halls at San José State, where she earned a bachelor’s degree in recreation and leisure service management. She earned her Master of Science in College Student Personnel at Western Illinois University.

She worked in residence halls, largely with first-year students, at Stony Brook University in Long Island, New York; George Mason University in Fairfax, Virginia; UC Davis and San José State before arriving at Stan State, where she is happy to have landed.

“These students are my absolute favorite students I’ve ever worked with,” Hubbard said. “They are amazing. They’re strong, passionate, smart, deserving and have humility that makes me want to do more.”