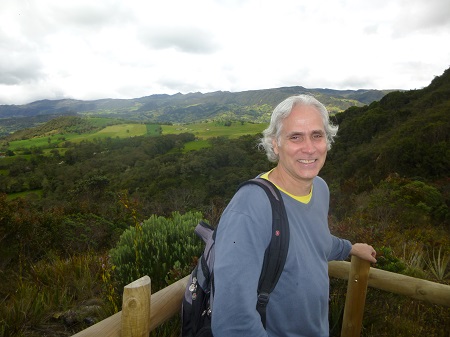 Richard H. Wallace, an associate professor of anthropology at Stanislaus State, has been doing research in the Amazon Basin since 1992. So being granted a Fulbright Scholars Award to fund research in Colombia is the natural next step in his work.

Wallace, who has been teaching at Stan State for nine years, will be leaving in August for Colombia, with his Fulbright-sponsored research performed in cooperation with the Amazon Institute for Research at the National University of Colombia Amazonia Campus. Wallace will return to Stanislaus for the spring 2017 semester.

After earning his bachelor’s degree in marketing from Miami University in Ohio, Wallace continued his education at American University in Washington, D.C. His research brought him to Brazil to search for ways forest communities could expand their economic base through the sustainable harvesting of non-timber forest products.

“We were looking at how forest communities are integrated into markets and what the potential is for them to sell extractive products from the forest in a sustainable way that would increase their incomes,” said Wallace, whose wife is Colombian.

He went back again while working on his doctorate at the University of Florida, this time focusing on the often one-sided business relationship between traditional rubber collecting households and outside markets.

“The rubber tappers have been selling into the markets for more than 100 years, but the issue was that they were price-takers and had no power,” Wallace said. “They were at the mercy of the traders or the people who owned supply houses.”  His research sought to better understand the impacts of strengthening market ties within both product and labor markets.

On this trip, Wallace and the Amazon Institute for Research will be working on collaborative projects to explore some of the issues specific to the Colombian Amazon region including how the growth of ecotourism is driving new market connections and how these might bring economic and cultural changes.

“Fulbright is interested in promoting global cooperation through addressing critical issues,” Wallace said. “Important components, for me, are to work with colleagues in Colombia to contribute to conservation and development in the Amazon region, to mentor students in Colombia, and my biggest hope would be to develop an opportunity for Stanislaus students to either travel there or develop connections with Colombian students and share experiences.”