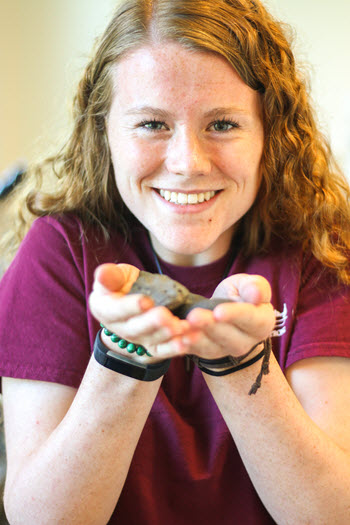 Growing up in the small Sierra Nevada foothill town of Sonora, Danah Gissler  never gave much thought to the scientific wonders she might find in far-off destinations. A self-described homebody, she relishes quiet time at home with family and friends.

But she’s not one to pass up a chance to learn more about her passion — geology. And when the Stanislaus State geology major found she could be introduced to oceanographic research on a nearly free 10-day journey to Iceland aboard a working research vessel, she jumped aboard the opportunity.

“I have traveled before, but always with family or people I know,” she said last spring, shortly after returning from the journey. “This time, I got on a plane alone and flew across the United States, connected with people I’d never met, then sailed across the Atlantic. I learned so much, and it really showed me what I’m capable of doing.”

Promoted as an “exploratory experience,” the STEMSEAS voyage Gissler took is a Columbia University-operated program funded by the National Science Foundation and partners. The program’s goal is to introduce undergraduate science, technology, engineering and math (STEM) students, as well as other interested students, to oceanography and geoscience on the open seas before they settle on their career goals.

For Gissler, it was an eye-opening experience. Pursuing an ocean-related research career had never crossed her mind, but once she set sail on the Research Vessel (RV) Neil Armstrong out of Woods Hole, Massachusetts, she found herself fascinated by the possibilities.

“I really liked learning about the ocean,” she said. “It covers more than 70 percent of the earth and we might know 10 percent of what we could know about it. I definitely want to look more toward geologic careers that relate to the ocean.”

“Giving undergraduate students research experience helps them learn about the wide variety of geology careers available and helps motivate them to go on to graduate school,” Sankey said. “It also introduces them to the excitement of research and of producing new and important knowledge. In particular, the climate crisis is an extremely important and relevant topic, and Danah learned the important role oceanography plays in this field.”

The RV Armstrong’s destination — the island of Iceland — is located where the Eurasian and North American tectonic plates meet and are being pushed apart by hot magma deep below the Earth’s surface. It is one of the most active volcanic regions on Earth and the only place where the seam between two plates is not at the bottom of the sea. Rift valleys, geysers, hot springs, columnar basalt formations, lava fields and other geologic features can be easily accessed and studied.

As they sailed toward their destination, Gissler and the other eight students on the voyage participated in a daily routine of classroom activities focused on tectonics, navigation and analyzing previously collected sediment core samples from the ocean floor. The students also spent a significant amount of time collecting data and samples for climate-change researchers who had contracted for the ship’s services.

During their free time on the ship, the students talked to instructors and crew members and learned what life is like working full-time on a research vessel.

“I actually went up to the bridge a lot, where the steering of the ship occurs, and learned a little about navigation,” Gissler said. “There’s this beautiful view out these windows that goes all around the bridge, so you can see everything surrounding you. It was amazing.”

When the ship docked at Reykjavik, Iceland, the students had less than two days to visit some of the island’s famous geologic sights. They drove to the rift zone, where a person can walk between the North American and Eurasian plates. They also visited a very active geyser and spent time at expansive black sand beaches where they could gaze up at towering columnar basalt formations created long ago by cooled lava.

Gissler’s favorite part of the sightseeing was visiting the columnar basalt formations with their hexagonal structure, which she found fascinating. “They are really beautiful, and I was so excited to be right there, seeing them,” she said.

As she enters her third year at Stan State, Gissler is starting to sort out her options for a future career. Hydrogeology is one option she is considering, and thanks to the journey to Iceland, she is intrigued by research and its power to help humanity.

“I haven’t taken enough classes to know exactly what I want to do,” she said. “I know I love the application of geology and being able to help people, and I love research.”