Faculty Member Lauded for Her Efforts to Connect with Students 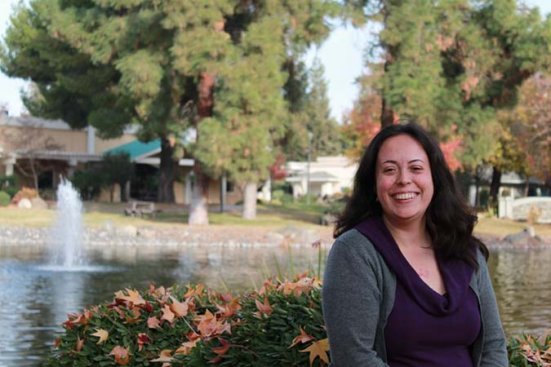 An Arizona State University (ASU) student who wrote an audacious seven-page email to Anita Pedersen-Pennock with advice on how the lecturer could become a better teacher might be surprised to learn that she didn’t take any of her tips seriously.

Pedersen-Pennock figured out on her own how to better teach as a professor of psychology and child development during her seven years at Stanislaus State. This year, she earned the Academic Senate’s Outstanding Professor Award.

“She was upset I had not given her extensions, not because of a personal, family emergency, but because it wasn’t her responsibility to monitor deadlines,” Pedersen-Pennock said, who taught at ASU for three years. “It was always unclear to me whose responsibility that was.”

Pedersen-Pennock expected student privilege like that to be the norm at universities until she came to Stanislaus State.

“I have never, ever had a student who acted as though I was here to serve them,” she said. “This is something Stan State students have worked hard to reach. So many of them are first-generation.

“At Stan State, I feel like I’m making a difference in students’ lives and not continuing the privilege for people who already have lots of privilege. I’m helping someone with their building blocks to a truly better life for themselves, and, we’re a team. I feel like I collaborate with my students in a way that is really lovely. I feel so honored to have this role in their lives. They’re very appreciative.”

Pedersen-Pennock constantly reminds her students they are the ones who put in the work to succeed. On her journey as a professor, she found it was important to better connect with them.

“I made a lot of mistakes in how I initially taught,” Pedersen-Pennock said. “I didn’t emphasize rapport as much as I should have. I focused on the content and the students didn’t respond well. A lot of students were fine, but a few made me step back and say, ‘I need to change how I do this, because I’m losing these students.’ It rocked me in terms of who am I as a professor.”

Determined to reach her whole class, she began asking for constant feedback and honest evaluations in both her undergrad and graduate courses.

Pedersen-Pennock puts her child psychologist license to work with clients — both children and/or their families. She conducts research with students, mentors McNair Scholars and undergraduate and graduate research assistants, and LGBTQ+ students. Teaching, though, is her priority.

Hence, as with her clients, she focuses on developing a rapport with her students.

“I wasn’t emphasizing that enough,” Pedersen-Pennock said. “I worked very hard over the last two or three years to strengthen that. I’ve seen a real shift. Students seemed happy to be in my classroom. Undergrads had been consistent in that, but I started to see it in grad students. They started to come to me for help with issues outside of class.”

When the pandemic hit, Pedersen-Pennock was determined to maintain those bonds of trust.

“I was really flexible,” she said. “I changed my classes and would start with ‘How are you doing? For real, let’s spend 15, 20 minutes and talk about how you’re doing.’ They would talk. I sacrificed some course content because this is more important. All of it is connected. It was hard. I worried about them and prayed for them.”

When she read her student evaluations after spring 2020, she cried.

“I have never gotten such good evaluations,” she said. “I made a difference. When I came to Stan State, I realized I could make a difference in these students’ lives, and I did. I made that hellish semester a little better for some of them.”

She kept that approach going this year and was named Outstanding Professor.

“When I found out I cried and cried,” Pedersen-Pennock said. “When I was nominated, I started getting letters from students that said, ‘You made a difference in my life. You listened to me, you heard me. I learned so much because of your support.’

“I told my wife that even if I didn’t get this award, I was glad I agreed to pursue it because of the letters students were writing. I’m really grateful for the faculty letters from my colleagues, but the powerful ones were from the students.”

A San Francisco native, Pedersen-Pennock knew when she was in high school that if she didn’t pursue teaching, there would be an emptiness in her life. She earned her undergraduate degree at Smith College, fulfilling a childhood dream to attend a college on the East Coast like the one she’d seen in a photograph. She earned a master’s degree at Penn State University and began her Ph.D. program there before following a mentor to Arizona State, where she completed her studies.

She traveled, lived for a time in Europe, worked within her field and then found a home in the Central Valley, a place she laughingly said her extended family didn’t know existed.

Pedersen-Pennock has fully embraced this region of the Golden State, settling in with her wife Amy and their 4-year-old daughter Maya. Like the produce that thrives here, so too, has she.

“Coming from the place I was four or five years ago, when I knew I had to change because of the students’ responses, to receiving this award? I’m not saying I’m done,” she said. “You’re never done. You’re always growing, but they recognize I’m doing a good job and that feels good.”