A brightly colored mural has taken shape on 960 square feet of cinderblock wall in Columbia Park, thanks to students from the Stanislaus State Art Department, community volunteers and funding from the Turlock Mayor’s Public Policy Award.

Reflecting the landscape and water features of Turlock, the artwork was designed as part of an extensive planning process that included community outreach and coordination with city officials.

"When people see a mural, they're seeing the end result. They don't realize the process that goes into a public art project," said Jake Weigel, assistant professor of art. "It includes civic engagement, community outreach, getting feedback from the community, working as a group and budgeting." 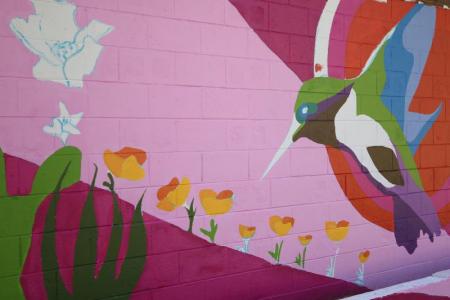 Weigel noted that planning and executing a public art project has been an educational experience for the students involved. Months ago, they reached out to park users, residents in the neighborhood and children at nearby Osborn Elementary School and Westside Ministries to gather their ideas before the design of the artwork began. Once the design was completed, they shared it with park neighbors for feedback and submitted it to the city of Turlock for approval.

In the initial stages of painting, students worked with community volunteers to get the outlines up and filled. Once the bulk of the painting was done, the students cleaned up details and put the final touches on the art.

In its third year, the Mayor's Public Policy Award started in 2015 when Turlock Mayor Gary Soiseth redirected his $500-a-month stipend to the University with the goal of funding projects to benefit both the city of Turlock and Stan State students.

The city of Turlock hosted an official unveiling on October 17.