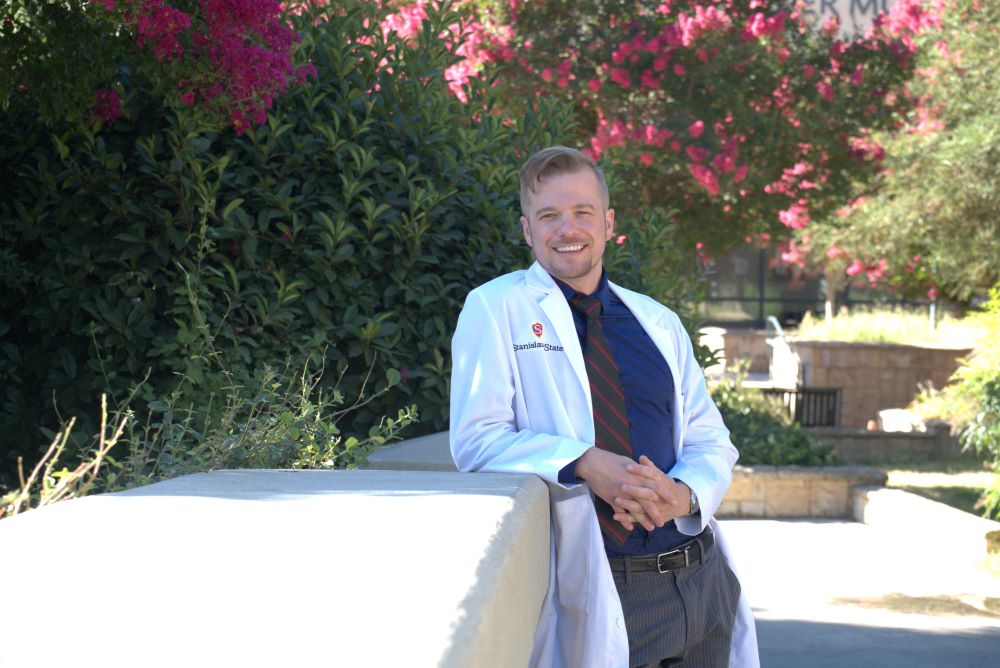 Robin Fredeking, who dreams of one day working as a family nurse practitioner in the Turlock region, is Stanislaus State’s recipient of California State University’s 2020 Trustees’ Award for Outstanding Achievement.

Fredeking and the 22 other recipients — one from each CSU campus — will be honored Tuesday during a ceremony as part of the CSU Board of Trustees virtual meeting .

“The diverse and distinguished students wonderfully exemplify the CSU’s core values of academic achievement and service to the community,” CSU Chancellor Timothy P. White said. “All of these scholars have overcome unique challenges on their educational journeys, and their stories have left an indelible positive impact on their families, communities and the state of California.”

Fredeking, the Santé Health System Scholar, completed Stan State’s RN-BSN program in 2019 with a 4.0 GPA and now is enrolled in the School of Nursing’s Master of Science in Nursing, Family Nurse Practitioner (FNP) concentration.

“Being a recipient of the Trustees’ Award is a humbling, unexpected honor and privilege, but more importantly it’s a responsibility to continue carrying forward the core values of the CSU system,” Fredeking said. “I made a promise to myself years ago that I would be a student for life and that a commitment to life-long learning would be my modus operandi.”

He’s lived up to that promise. Fredeking earned his associate degree in nursing in 2009 at San Joaquin Delta College where he graduated first in his class and was honored with Outstanding Student and Outstanding Academic Achievement awards.

He immediately began his nursing career, including time at University Medical Center in Las Vegas where in 2012 he was named Emergency Nurse of the Year by the March of Dimes Foundation.

He returned to the Central Valley and took classes at Modesto Junior College before enrolling at Stan State to complete his bachelor’s degree. He is pursuing a master’s degree in the FNP program while working as an emergency room nurse at Stanford ValleyCare Hospital in Pleasanton.

Well aware of the shortage of general practitioners as healthcare providers in the Central Valley, Fredeking knows that he will be able to make a difference.

“I wish to be a part of the solution of meeting the needs of the underserved and the general public who are still unable to receive the care they need in a timely manner despite having access to health insurance,” he wrote.

Fredeking’s dedication to helping others is a thank you to the family who took him in when he was 13 years old, saving him from an impoverished and abusive childhood.

“When my final days of living come, and I have an opportunity to reflect on my life regarding whether it was one of substance, I will be disappointed if I cannot say that I pushed forward, chose the road less traveled and did my best to fulfill my potential,” he said. “I want to see I did it generously, by giving more than taking and by leaving my small circle of influence a little bit better than I found it,” Fredeking said.

“If I’m being transparent, I am one of the most flawed people I’ve ever known. The least I can do is try to help others feel better about themselves physically and mentally, even if only one person at a time.”

In addition to the comfort he provides to patients, Fredeking’s willingness to help others is evident in the classroom.

“His classmates often turned to him for help in understanding course material,” said Professor of Nursing Diane Katsma, who taught Fredeking in four of her classes. “He was an astute thinker who could quickly take knowledge and translate it into practice.”

“Upon completion of my graduate degree from Stan State, I look forward to practicing and serving local families in need while teaching future cohorts of students from Stan State or other campuses and pursuing a doctoral degree in nursing,” he said. “I aspire to become involved in research to further the profession by contributing to evidenced-based practices, raising expectations and standards of nurses at all levels and striving for increased autonomy, accountability and involvement in medical practice.”