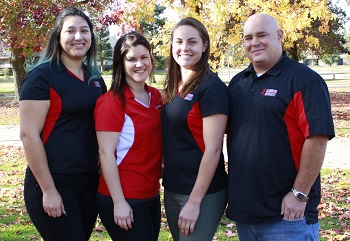 For California State University, Stanislaus senior kinesiology student Hannah Cifuentes, answering the call to help establish a public fitness group was a chance to add a nice line to her resume.

It didn’t take long for the program, 100 Citizens, to become her cause.

The program, started five years ago at Cal State Northridge, enlists kinesiology students to join with local parks and recreation departments to teach and offer fitness training free of charge to the general public.

The first 100 Citizens partnership between Stan State and Turlock Parks and Recreation already has been added to the city’s official recreation calendar. The program, open to persons 18 and older, will start offering 50-minute workout sessions at 4 and 6 p.m. every Monday, Wednesday and Friday from Feb. 15-March 25 near the northeast parking lot at Donnelly Park.

It’s a no-brainer, a win-win for everybody. The public gets a chance to improve their fitness, it’s a free program, and the students learn organizational and teaching skills that will be beneficial no matter what careers they pursue after college.

“I got into this initially because it looked like a good thing to put on my resume,” Cifuentes said. “Once I saw the program it changed my perspective because we’re actually, physically helping others. The people love it — their faces light up when they’re exercising, and it’s so beneficial.”

Kinesiology professor Steven Loy at Cal State Northridge began the program in 2011, partnering with the city of San Fernando. Since then, the Northridge program has expanded to parks in Sylmar, La Crescenta and Canoga Park, with Loy reaching out to other CSU campuses in an effort to spread the program.

Stan State kinesiology professor Jeffrey Bernard, who earned his master’s degree under Loy at Northridge, was an easy sell.

“It’s a great program, so I was happy to help get it going — to get the students organized and on their way to making it happen,” Bernard said. “This is a partnership between the kinesiology department and Turlock Parks and Recreation, which is running the program. We’re supplying the volunteers and the students have been through various University classes that have been ideal for them to lead these kinds of classes throughout the community.”

A group of four Stanislaus students — Cifuentes, Channing Wilson of Turlock, Consuelo Hernandez of Livingston and Alexa Sanchez-Estrada of Merced — attended a 100 Citizens workshop at Northridge last February that included participating in one of the community workouts.

“It was around 8 a.m. when we started walking into the park and I was surprised to see a lot of people working out,” Hernandez said. “There were different stages and all kinds of ages. One reason to have kinesiology students lead classes is because we’ve learned how the body moves and how to adapt an exercise to benefit the person according to their age and level of fitness. If we see a person struggling, we can make it easier on them so that they can do the exercise safely and get a good workout.”

The foursome came back to Turlock fired-up to get 100 Citizens up and running right away. But before they could schedule and conduct workouts, they had to form a partnership with the city.

“That process was a real learning experience,” Cifuentes said. “We saw the program in Northridge in its fourth year, after it already had become a success. We had to start from scratch and figure out how this was going to work for Turlock. We had to come up with a business proposal and develop a relationship with the city. We’ll be able to apply a lot of that to whatever we do after graduation.”

At this point, the students don’t know quite what to expect when they show up for the first class on Feb. 15.

“We’re hoping people show up,” Wilson said. “Northridge told us that they had only one person show up for one of their sessions at the beginning. I think if we get 10 people to start it would be a success. Word-of-mouth will really help us. When we visited Northridge, they had organized three different groups based on age and ability. We don’t know if we need to get ready for that many different groups because we don’t know who is going to show up.”

If the program gains a local foothold, Barnard vows to be ready with a never-ending stream of kinesiology students willing to help out. He’s enlisted the help of the students already in 100 Citizens to do the recruiting.

“The idea is to have a fresh group of students each year to help run the program, and that’s part of the original design of the program at Northridge,” Bernard said. “It’s sustainable because we always have students going through the ranks.”

As the students participate, they’ll be gaining practical, hand-on experience in their field of study. From that standpoint, it might be difficult to determine which group benefits more — the students or the people whose lives will improve through fitness.

“The two big obstacles to getting people to exercise are time and money,” Bernard said. “You get all these pamphlets in the mail about free gym memberships that last a few months, but eventually you’ll have to pay. We can’t find you the time to exercise, but we can make it free. We remove one of the major obstacles.”

To register for 100 Citizens classes, visit the Turlock Parks and Recreation website.