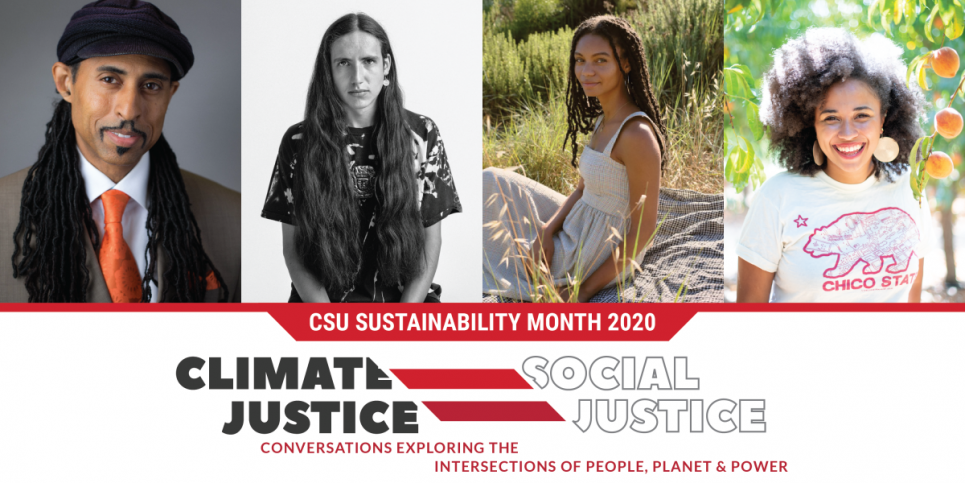 Demand for change that has recently been voiced in the streets of America and has been addressed by sustainability advocates for years, has resulted in a first-time collaboration among CSU partners to present “Climate Justice = Social Justice: Exploring the Intersections of People, Planet and Power.”

The virtual event, part of Sustainability Month, is open to everyone and features young social and environmental advocates of color. It begins Monday with a keynote address and Q&A session with Mustafa Santiago Ali from noon-1 p.m.

Both are open to all who register in advance.

“Part of this is helping students understand they can make a difference by becoming activists,” said Stanislaus State Sustainability Director Wendy Olmstead. “They can become civically engaged and lobby members of Congress to make a difference about our climate and our environment and move us away from fossil fuels.”

While students understand the social justice protests encompassing the country, the link to environmental justice may not be as obvious.

“We’ve been talking about these issues and how they intersect for several years,” said Holli Fajack, sustainability coordinator at Cal State Long Beach. “The issues and events of late have crystalized some of the ideas and the way people are understanding them.”

“We’ve been trying to raise awareness of how important social justice is to sustainability as a whole,” Olmstead said. “It’s been overlooked in the past. You can’t have climate justice without social justice.

“The impact of environmental climate change on minorities, women and low-income communities is disproportionate to how much they contribute to that. Large companies and fossil fuels are responsible for greenhouse emissions, but marginalized communities are most greatly affected.”

The upcoming virtual events highlighting that issue sprang from the cancellation or alteration of Earth Day and Earth Week events in April as a result of COVID-19.

Fajack began looking ahead to October and Sustainability Month and reached out to her fellow sustainability coordinators across the CSU to brainstorm ideas and pool their resources to offer programming. Olmstead was quickly on board with a group that grew to 14 or 15 campuses.

Olmstead secured donations from Stan State's Office of the President and the Warrior Cross Cultural Center.

Collectively, campuses and the Office of the Chancellor donated $11,000 to pay for speakers that Olmstead said can have a tremendous impact.

Organizers chose speakers that would appeal to students, Fajack said, and to prove that youth is no deterrent to activism. The line up also demonstrates that people of color are environmental leaders, too, and not just white people.

Santiago Ali, the program keynote speaker, was a 16-year-old student when he started working at the Environmental Protection Agency (EPA). During his 24-year tenure, he helped establish the EPA’s Office of Environmental Justice. Ali now serves as vice president of environmental justice, climate and community revitalization strategies for the National Wildlife Federation.

Thomas, who will join Martinez in the live panel discussion, is credited with coining the term intersectional environmentalism, which she describes as an inclusive version of environmentalism that advocates for both the protection of people and the planet, and identifies the ways in which injustices happening to marginalized communities and the earth are interconnected. The 2017 Chapman University graduate is an internet influencer committed to mobilizing the environmental community to be anti-racist and not complicit, and encouraging people to explore new places, live more sustainably and practice radical self-acceptance.

Martinez’s activism began when he was 6 years old and addressed the United Nations. Now 20, the hip-hop artist is part of a youth-led lawsuit against the U.S. federal government for its failure to address the climate crisis and protect essential public trust resources. He’s published two books, is youth director for Earth Guardians and co-founder of NOW, which is mobilizing people to reverse the climate crisis, in part, by planting a trillion trees.

Holbert, the Chico State AS president from Lodi, has been involved in agriculture, is studying to be an agriculture educator. The recent recipient of a CSU Trustees’ Award for Outstanding Achievement hopes to teach in an inner-city school, introducing agriculture to those who may never have seen it up close.