“Who’s somebody you’ve met that says, ‘I’m somebody who studied walruses?’” Biewer asked. “It sounds like a great ice breaker.”  The potential ice breaker turned into ground-breaking research for Biewer, who helped uncover three new species of walruses by studying skull fossils at the Natural History Museum of Los Angeles County in pursuit of his master’s degree in geology from Cal State Fullerton.

He’s the lead writer of a paper published on the discovery in the Journal of Vertebrate Paleontology.

“It feels really great to have gotten into such a prestigious journal of paleontology,” said Biewer, who has been a Stan State geology lecturer since fall 2018 and teaches Dinosaurs and History of Earth and Life. “I’ve had previous publications that were smaller, more modest, but this feels very good and reassuring to me about myself and my skills.”

It also validates the painstaking work Biewer and two undergraduate students did at the Los Angeles County museum under Jorge Velez-Juarbe, the museum’s expert in marine mammals, and master’s advisor James F. Parham, who has focused much of his own research on turtles.

“When I got to Fullerton I was expecting to work on turtles, but Jim looked at me and said, ‘How do marine mammals sound to you?’ I was OK with that and he gave me a choice of walruses or dolphins,” Biewer said.

He chose walruses because “there’s not much that’s been found for ancient walruses,” Biewer said. “Only about 20 species have been found.”

He was right. Biewer’s detailed analysis of everything from skull size and shape to teeth measurement of 12 different adult male and female and juvenile specimens found years ago in Orange County that date back 6 million to 10 million years, revealed three previously unknown species.

One of them showed the beginning of the tusk associated with today’s walruses, an evolution that was a necessary means of survival, Biewer explained. It enabled the walrus to eat other available food in an area populated by many different species, including other walruses.

The team named that species Osodobenus eodon, Oso being the geological unit and odobenus the genus of the modern walrus.

“Eodon means dawn of the tooth,” Biewer said. “We had some fun with that.”

They named the two tuskless species Pontolis kohnoi, in honor of Naoki Kohno, a prominent walrus researcher from Japan, and Pontolis barroni, for John Barron of the U.S. Geological Survey for his important contributions to the biostratigraphy and paleoceanography of California.

All the treasures they studied had been collecting dust in museum storage since as far back as the 1970s.

“Working with this many specimens meant we were probably going to discover a new species,” Biewer said. “My moment of uplift came when we plugged in the numbers and information and the computer kicked out that this is new, and this is how it’s related to other walruses people have described.”

Lifetime in the Making

Biewer’s journey to species discovery began at Modesto Junior College (MJC), which he attended after graduating from Beyer High School in his hometown of Modesto. His mentor there was Professor Gary Hayes. 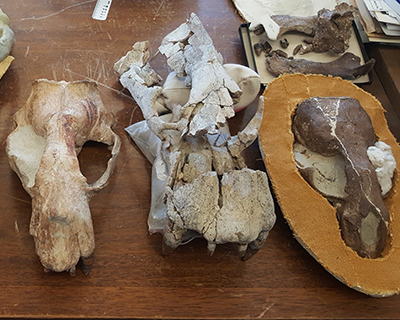 A lifelong lover of rocks — his grandparents and parents enjoyed looking for rocks and attending rock shows and passed on their passion to him — Biewer expected to follow a friend to UC Berkeley to study geology until Stan State Professor Julia Sankey and some of her colleagues visited MJC’s Geology Club.

“I thought, ‘this is so much closer and it’s a better fit,’” Biewer said.

“I credit my education at Stanislaus State as being at the core of getting where I am today,” Biewer said. “It was a rigorous department. They were teaching very much above and beyond the kind of stuff you would expect in a class where you’re learning about rocks. They had a huge collection of samples to look through.

“They had a fantastic field study course, which was required. I remember driving around, camping, staying in hotels, drawing up maps and getting real experiences a geologist needs.”

Biewer was excited to work with Sankey, who was dedicated to dinosaurs when they met and would later introduce him to Parham, who became his master’s advisor. The dinosaur research never happened, but Biewer and Sankey developed a bond, nonetheless.

“I shifted research interests to work on the fossils from around this area during Jake’s time at Stan State, and he was instrumental in that shift,” Sankey said. “We worked on 5-million-year-old vertebrate fossils and geology exposed at Turlock Reservoir.

“Jake was part of the entire research project: working in the UC Berkeley Museum of Paleontology, kayaking and hiking at Turlock Reservoir for field work to writing papers, creating illustrations, presenting research at conferences as far away as Germany and even hosting our own conference. He was a fantastic student who helped all the students around him.”

Now, he’s teaching students in his own courses, and, beyond that, he has helped the paleontology world with his new discoveries.