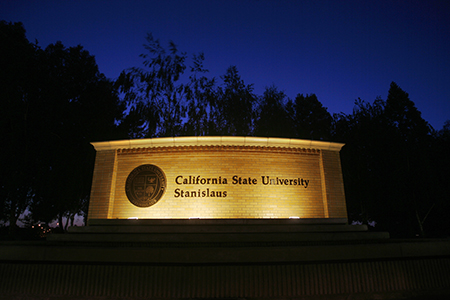 Spurred by George Floyd’s murder and the ensuing protests for social justice, Stanislaus State has created a 23-member Campus Advisory Board on University Policing and Community Safety (CABUPCS) that will focus on improving communication and relationships between the campus community, the City of Turlock and the University Police Department (UPD).

The group met for the first time Dec. 10 and UPD Chief Clint Strode was optimistic.

“I left the meeting feeling as though the members were motivated and eager to continue our discussions,” Strode said.

Stan State is one of the first CSU campuses to create such a board, and while the impetus was the horrific murder of Floyd — who died when a Minneapolis police officer knelt on his neck for eight minutes and 46 seconds — such a board had been considered for a long time.

Strode knew it could no longer be delayed when protestors took to the streets, and he began working during the summer with President Ellen Junn to formulate plans. The Board will be coordinated by the President’s Office with Neisha Rhodes, director for presidential initiatives, serving as the chair.

“The board looks forward to working with UPD and our campus and community partners on this critically important initiative,” Rhodes said. “Our goal is to ensure we fulfill our charge to build trust and positive relationships between our groups and work collaboratively to develop effective community-centered approaches that prioritizes everyone’s safety.”

Since 2015, public safety departments at all 23 CSU campuses have been moving toward using former President Obama’s 21st Century Policing Plan.

“There were six pillars recommended by Obama’s plan that law enforcement should work toward, and Pillar No. 1 was building trust and legitimacy,” Strode said. “One of those was recommendations was to establish a police advisory council or a community engagement committee.”

Strode, who has been in his post since Dec. 31, 2017, views the committee as an extension of the actions he and his department already have taken.

In October, Strode issued a statement on diversity co-signed by every member of the sworn UPD staff.

UPD outreach programs include a student police academy, providing students with an opportunity to learn about traffic stops, DUI investigations, fingerprinting, dispatching and more. The department also offers a Rape Aggression Defense Program to students, faculty and staff in addition to various engagement activities throughout the year, such as Coffee with a Cop and the Stan State Night Safety Walk.

Now, representatives of 21 campus and community entities, including the Black Student Union; ASI; Housing and Residential Life; Black, Chicanx Latinx and Asian Pacific Islander faculty and staff associations; the Warrior Cross Cultural Center; LGBQTI+ community and the Student Commission on Diversity, Equity and Belonging, will be informed about such outreach.

“I’ve held meetings with several groups many times over the years,” said Strode, who joined the UPD as an officer in 1996 and earned both his bachelor’s and master’s degrees in criminal justice from Stan State. “We’ll find out if this board is something that brings those groups together and streamlines that outreach. I hope so. But, I will still make the offer to any group that wants us to come and speak to them.”

Among the information Strode is proud to share, whether at the newly-formed board or to individuals or groups, is that his department, with 12 officers reporting to him, has someone on duty 24/7, 365 days a year.

“University police departments have more of a guardian philosophy,” Strode said. “My goal is to have students, faculty and staff on campus come here and be safe.  Unfortunately, many opinions about us are formed by what people see on the news, and that doesn’t represent who we are and what we’re doing.”

He said one of his officers bought a pair of boots for a homeless man he encountered. Another bought a meal for a homeless man. One made sure a student with mental health issues had appointments with a veterinarian for her therapy dog.

Those random acts of kindness don’t get reported. Strode said he hears about them, second- and third-hand. Officers simply do them.

His team also has undergone training on implicit bias. He has sent his officers to various conferences on the subject.

While there is still work to be done and issues to be addressed, the advisory board will enhance transparency. The board will also directly inform important policy and procedural changes through engagement with the broader campus community.

“My goal is for our department to be able to hear the concerns of the community, so we can be most effective in employing what resources we have to address those concerns,” Strode said. “Having this space creates an open dialogue and people can understand why police do the things they do. It’s very important to open up lines of communication and lines of understanding.

“I look at this group as allies. This is something I think is going to be very positive,” he said.