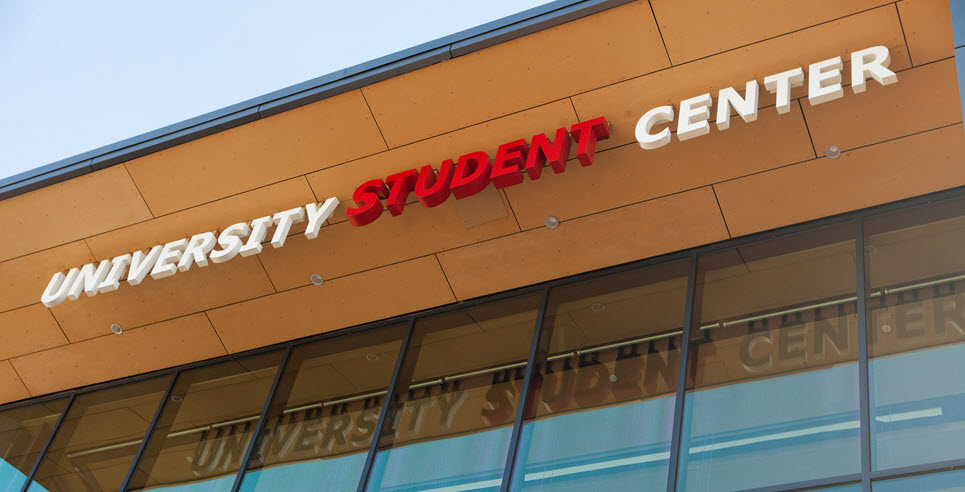 The spring semester at Stanislaus State kicked off with the much-anticipated grand opening of the new University Student Center.

“This is your lasting monument on this campus,” said President Ellen Junn. “It’s a monument to student life and leadership that will play such a large role in maintaining the welcoming campus atmosphere we have at Stan State.”

In her remarks to the crowd of excited students, faculty and staff attending the ribbon-cutting ceremony, Junn noted the initial ground-breaking was held 718 days before the opening, but the idea of building a new Student Center was sparked in 2012. A design planning team consisting of students and professional staff helped bring the idea to fruition. 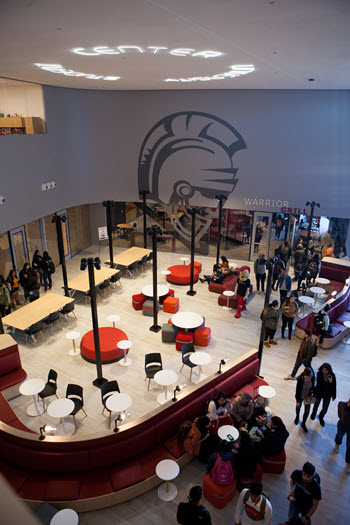 Over the past eight years, several University Student Union board chairs oversaw the design planning team. The chairs included: Natalie Dykzeul (2014-2016), Hailey Holm (2016-2017), Allysa Gonzales (2017-2019) and Jennifer Galeana-Vasquez (current), all of whom spoke at the ceremony to celebrate the result of hard work and perseverance.

“With Natalie leading the passing of the referendum, to Hailey’s dedication to the student vision during the design process and to Jennifer for bringing everything together and to a close, we can now say this years-long relay race of a project has finally reached the finish line,” Gonzales said.

Just after the groundbreaking in 2018, the operations of four student organizations were relocated into two on-campus housing suites, where they remained until the completion of the new building.

“With the new building comes growth,” said Galeana-Vasquez, who has been involved in the process for five years. “We hired a total of 40 new student assistants, added 20 volunteers and an additional five professional staff. They are committed to maintaining our building and our services so we can better serve our students.”

There is plenty of space for these new workers and volunteers as well as for students. The Student Center is 152,432 square feet, seats 1,228 in the lounge areas and 410 in the new Warrior Grill.

Gabriel Ferdin, a third-year communication studies major, says his favorite part of the Student Center is that it has more room than the old building. He encourages visitors to explore the entire Center because it has so much to offer, and as someone who uses a wheelchair, he appreciates the building’s accessibility.

Other students also praised the spacious feel of the new building.

“It’s so huge that it shocked me at first,” Roni Byrd said, a mathematics major in her second year at Stan State. “It looked huge from the outside, but it’s just as big on the inside. It feels like you’re walking in a mall because it’s so spacious. It’s really cool.”

Students piled inside the new building, excited to see the result of two years of construction.

“It’s finally real,” said Teresa Martin, also a second-year mathematics major. “It seems like such a good spot to study and get food. The space, along with the bookstore, makes it really great.”

Martin and Byrd’s favorite parts of the Student Center are the cubby tables because they seem like the perfect place to study, as well as the Warrior Steps and Warrior Grill — because they offer a great view of the campus — and games like pool and foosball for study breaks.

“I’m really happy with the way the Student Center turned out,” Martin said. “The design is so sleek and clean. I really appreciate the hard work that was put into this building. It’s better than I imagined.”