If not a once-in-a-lifetime event, the projected blooming of the corpse flower in the University greenhouse is a rare treat.

“I’ve been a botany student for years, and I didn’t see one until I was almost 40,” said Biological Sciences Professor Stuart Wooley, who brought the bulb for the plant, a gift from the University of Washington greenhouse, to the campus in 2011.

The corpse flower, Amorphophallus titanum or titan arum, named for the rotten-meat stench its bloom produces, is native to Sumatra, Indonesia, and blooms every seven or eight years. Its appearance in U.S. botanical gardens and greenhouses is rare with fewer than 200 blooms ever recorded.

To allow anyone interested in seeing the exotic, rare flower bloom, a live web camera is trained on the plant in the Stan State greenhouse. Anyone can log on to see this rare sight, which Wooley said will last 24-36 hours once it begins to bloom. 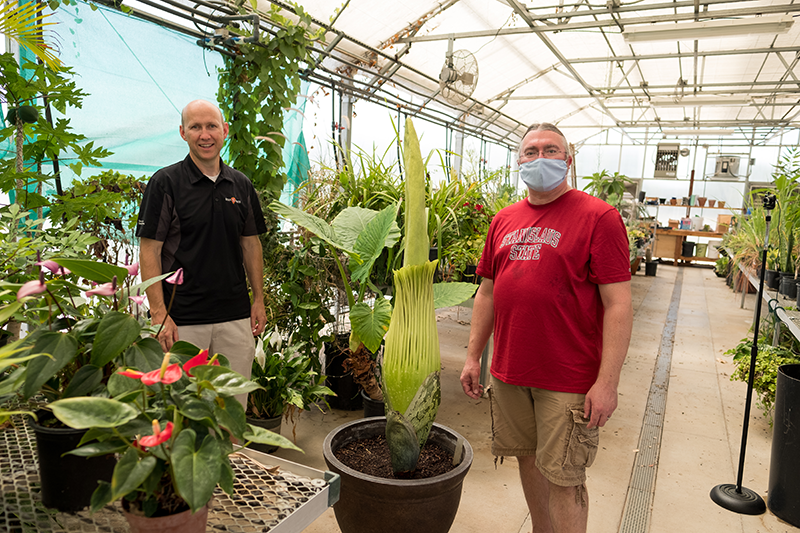 That Stan State’s greenhouse has this flower was a stroke of luck. Wooley happened to be in Seattle working on an unrelated fellowship at the Fred Hutchinson Cancer Research Center in 2011 when he learned of the corpse flower blooming at the University of Washington.

“I was pretty excited,” Wooley said. “I’d never seen one in real life.”

As a botanist, he knew of them, of course.

Although much larger, the corpse flower is similar to a calla lily, in that it has one petal surrounding a center stalk comprised of dozens of tiny flowers.

“They’re the largest single un-branched inflorescence in the world. An ‘inflorescence’ is a group or cluster of flowers on a stem,” Wooley said. “These structures on this plant can be more than nine feet tall. You hear about them as a botany student. You see pictures, and they’re spectacular. I thought it would be awesome if we had one for our campus.”

He requested and was gifted a corm — an underground storage stem similar to a bulb — about the size of a grapefruit, brought it to Turlock and planted it in the greenhouse. After several cycles of growth and a dormant phase, Wooley placed the corpse plant in a south-facing window on the second floor of Naraghi Hall. For at least two years, custodian Choy Saeteurn cared for it, watering and feeding the plant as it continued to grow.

The corpse plant finally was moved to the greenhouse around 2017 where it has grown to between 20 and 40 pounds, cared for collectively by Wooley and faculty colleagues Andrew Gardner and Michael Fleming, who have shared responsibility for watering and caring for the plants in the 30-by-90-foot greenhouse for many years.

“It really has been a group effort,” Wooley said.

The three have kept vigil as the plant went through cycles of growing a leaf, or stalk, that didn’t bloom but fed the plant. They had no way of knowing when it might actually bloom.

“When it started popping up, Andrew Gardner and I were looking at it and it looked like it always did,” Wooley said. “That was about a month ago. I came to water it on a Friday and it didn’t look much different, maybe a little fatter. When I came to water again last Friday it was totally different. You could see the spathe sticking out of it and you knew it was going to blossom.”

When that happens, Wooley said, viewers will see the “petal” or spathe, tightly pressed around the spadix, the tall central structure, as the inflorescence continues to grow. The spathe will be green for a while, but when it starts to turn a reddish color, that is the signal it will be opening soon. At the base of the spadix are dozens of tiny little flowers, each about the size of a pencil eraser. When the spathe opens, the plant will give off a rotten-meat smell, which attracts flies and carrion beetles to pollinate the flowers if they bring pollen from another corpse lily. If the plant is pollinated, the corpse lily will produce tiny little fruits that will contain seeds.

In addition to being a beautiful vision, the bloom offers something more.

“There are a lot of great principles you can teach, botanical principles,” Wooley said. “Teaching about what an aggregation of a bunch of flowers is — an inflorescence — which is a basic botany term that introductory botany students would learn. But you can also talk about conservation of plants and why it matters. For example, academic greenhouses and botanic gardens are working together to preserve these and other plants in the face of habitat loss in developing areas of the world, like Sumatra, where, in trying to develop and improve their economy, they’re chopping down rain forests to make way for coconut palm plantations. Asking students to consider how to balance conservation and preservation with economic development and having them evaluate and grapple with real-world issues can be part of that conversation. There are a lot of questions and issues that can be developed around this for students. It can be interesting to students in many ways, and not just biology students.”