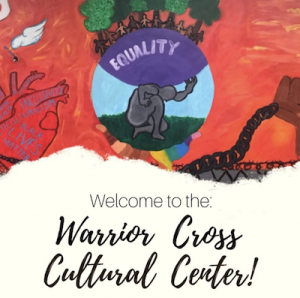 Reflecting its new name as voted on by students last spring, the Stan State Warrior Cross Cultural Center has scheduled a virtual Special Event Series that focuses on the intersectionality of identities of both individuals and communities.

“They’re workshops and activities that aim to enhance one’s lived experiences in a range of areas related to social justice,” said Carolina Alfaro, director of the Warrior Cross Cultural Center previously called the Diversity Center. “They will address the intersectionality of people’s lives.”

Conducted virtually through Instagram Live, Facebook Live or Zoom, the events will be open to all. A full description of the series as well as a calendar of events is available on the WCCC website.

“We want to engage students, staff, faculty and the community by offering these types of series,” Alfaro said.

The subjects for the special series were determined after conversations that began last year in the then-Diversity Center among staff, who also listened to student stories. Meetings with various student clubs over the spring and summer finalized the topics.

Some events will feature community members, including health-care workers in a session about health inequities in communities of color. Another, featuring the screening of Anna DuVernay’s documentary “13th” about the racial injustice of the U.S. criminal justice system, will be led by leaders of Stan State’s Project Rebound, which helps formerly incarcerated youth who are now students. Most, though, will be student-led.

A planned post-election reflection event will include the government liaison from ASI, and an environmental justice program will feature leaders of Stan State’s ECO Warriors club.

The Black Student Union is partnering on open-mic nights, and the Basic Needs program is providing food and the Warrior Cross Cultural Center is creating a recipe it will share — using the ingredients — in a cooking demonstration.

“It’s important for us to think about cross identities and cultures and not just as one identity or one culture,” Alfaro said.

Changing the name to Warrior Cross Cultural Center emphasizes that objective. Its stated mission is to seek to empower the community by educating students, staff and faculty and community partners to create a socially just living and learning environment on campus that is inclusive, affirming and just.

“We’re not like diversity centers of the 1970s or ’80s,” Alfaro said. “We’re taking more of an intentional approach to really think about ways those cultural systems of oppression have an impact on our communities and to provide programming aimed at liberating the voices of marginalized students and the campus community.”

The new name, Warrior Cross Cultural Center, was chosen in a vote of students over three other proposals during elections held by Associated Students, Inc., last spring.

A new name had been planned from the time the Diversity Center opened two years ago, said Alfaro, who applauds the students’ selection.

More than honoring the goal of those who sought such a center, Alfaro said the work to meet the objective goes on.

“Our mission has been written to bring about the vision of the students — to dismantle racial, social and cultural systems of oppression.”