A mother of three, an immigrant from Mexico who arrived in the United States at 14 not knowing a word of English, and a daughter whose dad’s terminal cancer diagnosis launched her on a path to studying computer technology with hopes of finding medical advancements are among the six new Stanislaus State students who began the 2019-20 school year as McNair Scholars.

The program, launching its third year at Stan State, is funded by the U.S. Department of Education and helps undergraduate students successfully finish their bachelor’s degrees and get accepted into graduate school. Named for Ronald E. McNair, the physicist/astronaut who was killed in the 1986 Space Shuttle Challenger disaster, the program’s primary objective is to place more first-generation/low income and historically underrepresented students in master’s and Ph.D. programs.

“Obviously, they are such intelligent, motivated students. I see tons of potential in them,” said McNair Scholars Program Director Araceli Garcia. 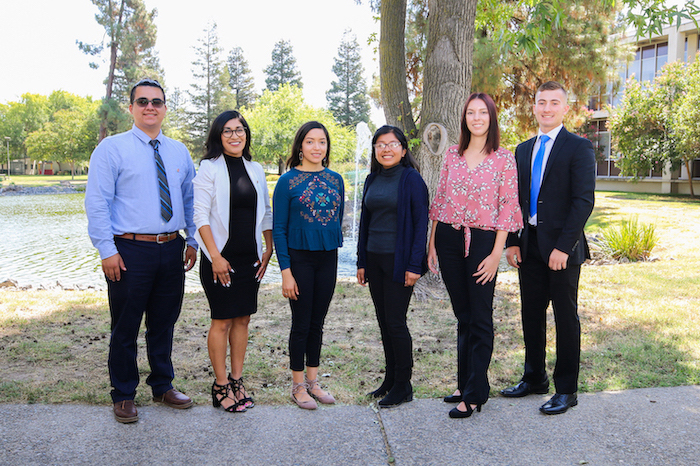 During their time as McNair Scholars, participants are paired with faculty mentors and design, complete, publish and present research projects. They also attend conferences and visit campuses to meet with faculty at prospective graduate schools.

Vazquez, whose family came to the U.S. when she was 14 to join her father who’d spent years working in the Turlock area, and Alfaro, the wife of a veteran and mother of children ages 8, 5 and 3, are already signed up for a conference in Chicago in October for Hispanic leaders.

Individually, the six are formulating their research ideas and establishing their mentors. Collectively, they say they are thrilled to be a part of McNair Scholars.

Van Hoogmoed didn’t know about Ronald E. McNair until she entered the program. The computer science major who wants to help others who, like her father, are diagnosed with terminal cancer, thought McNair was an educator until she learned more.

“Just the fact a program like this was made in his honor makes me speechless,” Van Hoogmoed said. “I’m really appreciative he was such a courageous person.”

“We’re kind of carrying a little badge of honor around in the McNair Program.” Green said. “We’re carrying around this message that anyone can achieve what they want to.”