Home  A Rhyme in Time, ‘Poetry and the Black Panther Party’

A Rhyme in Time, ‘Poetry and the Black Panther Party’

Scholarly Talk Will Discuss the Poetry of the Black Panther Party 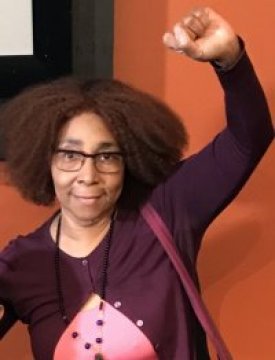 Seeing a photograph of Bobby Seale and Huey Newton brandishing legal firearms as they followed police in Oakland to assure the safety of Black people was enough to prompt 17-year-old Regina Jennings to fly across the country from Philadelphia and join a movement.

She became a Black Panther, and prepared and served free breakfast to children, sold the party’s newspaper and gained an education she didn’t get in school.

Years later, Jennings earned a formal education — a bachelor’s degree in English, master’s degrees in English and creative writing and a Ph.D. in African American studies with a concentration in literature — and used that scholarship to study the party that shaped her life.

“Once I finished writing ‘Poetry and the Black Panther Party,’ I knew it was not my story. It was the story of poetry in the Black Panther newspaper,” Jennings said. “I am a poet. I felt this need to tell my story. I started writing poetry. The words were flowing nicely. I had a manuscript and had friends read it and I decided to put this book out there. So, I have two books in circulation.”

The second, “Panther Poems: Poetry of a Sister Panther,” is an autobiography in verse.

Collectively the books paint a picture of the early years of the Black Panther Party for Defense that is often distorted by the establishment and white society.

It was not a militant threat, but an organization founded by Black college students who wanted to change how Black people were treated in America. Party members had registered guns and followed police officers to ensure Blacks were not abused or beaten. The party also prepared and served free breakfast to children, and in some cases their parents, and had food and clothing giveaways.

The sale of its newspaper was the main source of income for the Black Panthers, and Jennings said she and others would blanket Oakland, Berkeley and San Francisco to sell it.

Looking at the publication years later inspired Jennings’ scholarly work, focused on the poetry in each issue. Those poems unleashed her own story.

It’s the story of a little girl who grew up impoverished in Philadelphia, who was traumatized at age 3 or 4 when police raided the speakeasy her grandmother ran in the family home. That fear intensified when she was about age 11 or 12 and a playmate, Frank, was taken into an alley and beaten by police, who, when they finished said, “the guy we’re looking for was taller.” They left him in the alley and Jennings and her friends escorted him home.

“When Frank’s mother realized what happened, she punished him,” Jennings said. “Frank wasn’t allowed to come back out. As a child, I couldn’t understand why she was punishing him. As an adult, I know she was trying to save her son’s life.

“Several years later, I saw an image of Bobby Seale and Huey Newton, and they had guns and said, ‘We have to patrol the police.’ I said, ‘This is it. This is making great sense to me. I’m going to California.’”

At 17 she headed west and her life changed. She loved California and being in San Francisco during the 1967 Summer of Love. She and a friend shared an apartment. Her friend was a Black Panther, and party members would visit their apartment and Jennings heard enough to join in 1968.

She not only underwent physical training, but she learned the words of great Black orators, like Marcus Garvey and Malcolm X, and for the first time in her life, heard and read poetry by African American poets.

That’s part of the story she’ll share on Nov. 5 in combination with an engaging presentation on her poetic scholarship.

“I’ll talk about how it was a poem that Huey Newton and Bobby Seale were familiar with that started the Black Panther Party,” Jennings said.

“I’ll talk about negroes and how we went from negro to African American. Then I’ll read some poetry about my experience with the Black Panther Party and open it up for questions.”

Speaking to young people inspires Jennings, who sees new versions of herself and her fellow Black Panthers.

“I do feel bad we’re facing this issue my party tried to resolve,” Jennings said. “I see what young people are doing in the streets. Riots without structure are just riots. They need to learn to organize but seeing so many different people of so many nationalities joining Black people, when this is a Black issue, heartens me. I do have hope.”