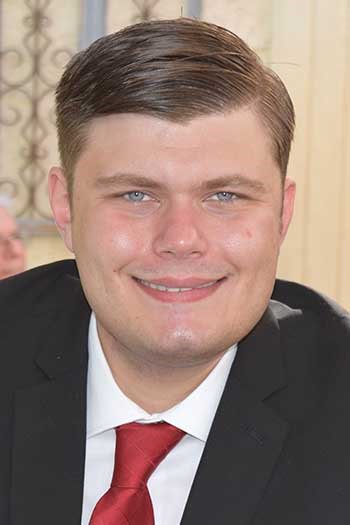 Stanislaus State alumnus Wesley Richmond has been awarded first prize in the 2018 Robert Avalon International Competition for Composers held by the Foundation for Modern Music.

Richmond graduated in 2018 with a Bachelor of Arts in Music, with an emphasis in music composition. He wrote his winning piece, Suite for String Quartet, in his final semester for a performance of Stan State student works by the Friction Quartet. Writing for a professional ensemble, a hallmark of the Stan State program, “was a fantastic motivator,” Richmond said.

The composition consists of four character pieces: The first movement shifts from stately to a fast contrapuntal section mirroring the same motif. The second movement is slow and contemplative. The third spotlights the cello and the fourth evokes a lively folkdance.

Techniques used include dissonance and non-functional harmony to enhance the effect of traditional melodic themes, Richmond said. “The idea behind this style is to create something both familiar to the listener and yet distinct and unusual.”

Deborah Kavasch, music theory and composition coordinator in the Department of Music, described Richmond’s style as “wonderfully wacky,” noting he demonstrated a sophisticated style for a student. “What I remember most about Wesley was he always carried two thick music composition notebooks around with him to write down ideas. And one of them was completely full,” Kavasch said.

Of his time at the University, Richmond said, “I always felt motivated and excited to try new ideas. I created the best music of my life so far at Stan State, and I am thankful for my experience.”

Since graduating from Stan State, the Modesto native has been working as a Modesto Junior College piano accompanist and at a variety of performances. His musical focus has expanded to exploring how computers process sounds and the math of music.