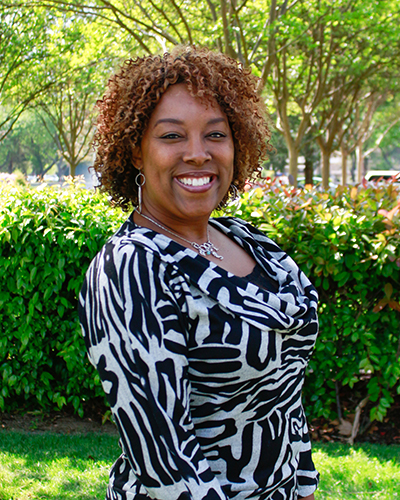 Kilolo Brodie is a mother, Stanislaus State professor of social work, advisor to Master of Social Work (MSW) students, unofficial mentor to fellow faculty of color and chair of the President’s Commission on Diversity and Inclusion. She also finds time to serve on the State Council on Developmental Disabilities, reappointed recently by Governor Gavin Newsom.

Her role on the council has changed since she was first appointed in 2013 by Governor Jerry Brown, from serving on the Regional Advisory Committee (RAC) overseeing Stanislaus, San Joaquin, Tuolumne, Calaveras and Amador counties, to chair of the State Plan Committee, a leadership position that puts her on the council’s executive board.

It adds up to a lot of meetings.

“When I would drive to mountain counties for RAC meetings, they’re in the evening, and I’d be by myself, and it was a good hour and a half or two-hour drive, but I felt so good,” Brodie said. “I felt I was driving there with purpose, and when I would leave it was late, I was tired, often driving on a winding road, but it lifted my heart. I just felt happy. It’s a joy.”

Her interest in the State Council on Developmental Disabilities stems from her personal life and professional life, which Brodie said are inextricable.

She’s the single mother of 13-year-old Jade, who was born with Down syndrome.

Before becoming a professor preparing the next generation of social workers, she was one herself. Now, she’s able to share with her students the latest information on services available to the disabled community and propose hypothetical situations to prepare students to serve those clients. It’s knowledge she admits she barely understood as a novice social worker, a job she held for two years after earning her MSW from Stan State.

Her place on the council came after a visit to the capitol with fellow members of Delta Sigma Theta Sorority, Inc. for Lobby Day, where a series of panels are held. One panelist urged the women to join boards or councils.

Brodie found one of interest, and within two years, after immersing herself in learning about its work, was a leader on the Council on Developmental Disabilities.

She joined the faculty in 2010 after teaching at Cal State East Bay and completing her doctorate at Howard University. It was a return to Turlock. Her dad had established a medical practice in the city after leaving Los Angeles when she was an undergraduate student. He and his wife were able to provide care for Brodie’s daughter when she was teaching, as were her mother and grandmother, who looked after Jade while Brodie successfully moved up the ranks of professorship.

By 2016 she was the Master of Social Work program director and department chair.

In 2013 she was asked her to join and chair the Affirmative Action and Diversity Committee, a group Brodie explains mostly held culturally diverse events.

The 2016 arrival of President Ellen Junn expanded the committee charge.

“She didn’t want to disrupt the Affirmative Action and Diversity Committee, but she said, ‘This should be bigger than events,’” Brodie said. “She came from campuses that had diversity officers and diversity centers on campus. She said, ‘We’re going to make this a lot more involved.’”

The committee became the President’s Commission on Diversity and Inclusion (PCDI) and Junn charged the group with developing a plan to better incorporate the University’s diverse population in all facets of campus life.

Attendance at PCDI meetings, held via Zoom, tripled during the summer after George Floyd’s murder, and Brodie was a calm, reassuring leader as pain and anger bubbled near the surface for some members of the campus community.

“Part if it is that’s my personality,” Brodie said. “But part of it is that I don’t just see squares on Zoom. I see people. If you’re going to have a conversation with someone, you have to see them.”

Brodie loves a good conversation and is good at diffusing tense situations.

Recently, as she walked down her street to her mailbox with two friends, one Black and one white, some teenage boys rode by on bicycles and yelled, “I hate N....” and other racial epithets.

“My first thought was, ‘I went to school in Atlanta for four years and was never called that word, there,’” said Brodie, a graduate of Clark Atlanta University, among the Historic Black College and Universities. “My second thought was, ‘I wish they’d turn those bikes around, because I wanted to have a conversation with them. I would have loved to have heard their rationale. I had so many questions.”

Her inclination to help may stem, she said, from being the daughter of a doctor and watching him care for his community.

She’s helping her community, becoming a pseudo-extended family member to students, faculty and staff of color just as Black staff and faculty were for her when she was a Stan State graduate student.

“Anyone starting a new position, you want them to feel comfortable,” Brodie said. “Not wanting to unduly influence, I don’t offer anything unless they ask. I have had people who, either when they were considering Stan State for employment, or just been hired, ask, ‘What’s the lowdown? You’re still standing. You’ve been here 10 years. How did you do it?’”

Brodie’s answer to finding comfort on a campus with few Black faces: Connections.

She tells them to make connections on and off campus and to remain connected to whatever makes them happy.

Brodie introduces new faculty and staff to others as much as she can and keeps her door open to anyone who needs her help.