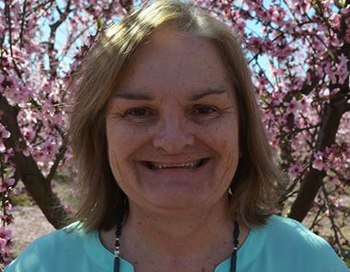 “It’s not just about recycling,” said Wendy Olmstead, former commercial operations manager at Stanislaus State. “All life is interconnected, which requires us to conduct ourselves through the lens of economic, environmental and social sustainability.”

In a nutshell, that’s Olmstead’s mission as part of her new role as the University’s sustainability coordinator.

“Sustainability is really a concept, so what I’m doing is bringing that concept to life,” she said.

While growing up in Northern Ontario, Canada, Olmstead said she adopted sustainability as a lifestyle.

“I was raised in a forest so it’s really easy for me to be passionate about the environment,” she said. “I wasn’t raised by wolves or anything, but I spent most of my time outdoors, so I really value nature.”

Olmstead earned her bachelor’s degree in agricultural studies at Stan State as well as two master’s degrees in ecology and sustainability and public administration.

“Stan State has been very good to me,” she added.

For the last 12 years, she has worked as an administrative analyst, commercial operations manager and lecturer in political science and public administration, but said she’s always been passionate about sustainability.

“I actually pitched the idea of a sustainability coordinator to the University president seven years ago when I was finishing my ecology master’s,” she said.

She officially started her new role in September and said her first order of business is to conduct a Sustainability Tracking and Rating System (STARS) audit on campus.

“All CSU’s are mandated to do a STARS audit,” she added. “It will take about a year, so that will be a real focus of ours.”

The audit will entail every aspect of the campus. Everything from procurement — such as what type of paper to use and what food to buy — to greenhouse gas emissions, energy use and food waste, to academic programming.

At the same time, the campus Council for Sustainable Futures will focus on campus events.

“We’re looking at holding a climate change lecture this semester,” she said. “We’re looking at a slate of events for Earth Week in April with films and guest lecturers. I also co-facilitate a faculty learning community so we’re also teaching faculty how to teach students about sustainability in a way that engages them so they understand the concepts and how to apply them to life.”

“Students are such great ambassadors. You just have to empower them and stand back really,” she said. “They have great ideas of what they want to do.”

For example, the club recently collected gently used clothing on campus and has conducted a clothing swap.

“It’s also really interesting to see what all the other CSUs are doing because we’re all different,” she added. “We all have different geographic locations, different types of students and cultures. We’re not a Humboldt or a Chico, but we’re also not a Long Beach. I think that’s another exciting thing is figuring out how Stan State will approach sustainability.”

Olmstead said the STARS audit will help Stan State identify its strengths and weaknesses, but she believes the campus is already on the forefront of innovation and the results from the audit will help the University share its story.

“We have a sustainability website now, so we can use that,” Olmstead said. “I have students that are chomping at the bit to get our social media up and running and I think everyone is going to enjoy celebrating.”