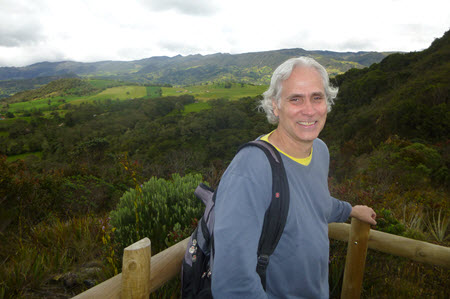 But by mid-spring, those displays should be different. And the person responsible for the next content could be you.

Wallace’s display is the first that is a part of the MSR Exhibition, a rotating showcase of artistic, visual and intellectual expression in that airy and natural light-soaked space. The purpose of the rotating exhibition is to provide a forum for students, faculty, staff and alumni to share their work and interests with the broader campus community.

The concept was advanced by the office of Provost Kimberly Greer, who established a MSR Exhibition Advisory Board comprised of faculty members. The current curators are advisory board members Steven Drouin (advanced studies) and Monica Flores (English.)

Wallace’s work in Colombian Amazon in the indigenous community of Macedonia, which was underwritten by a Fulbright Scholars Award, involved conducting research with the region’s artisans to understand how artisans learn different types of knowledge – ecological, artisan carving skills and market knowledge critical to be successful. Innovation – both creatively in design and through marketing – is needed in an increasingly competitive market within and among communities serving a growing regional ecotourism industry.

“There are original artisans in the community that have knowledge about the forest and how to make and sell things – because they’ve been around a while,” Wallace said. “Younger artisans have to gain access to the markets. They sometimes can get it through the older artisans, but they also need courses on design and or business practices, such as identifying markets beyond the ecotourists coming to their community, and they need assistance from organizations outside the community. They need those to become competitive with their products.”

The inaugural display of Wallace’s artifacts from the region are principally carved from bloodwood, a heavy and extremely dense wood that can only be collected from the forests after the trees have been allowed to dry naturally for extended periods of time – often years – after the tree is felled or topples from natural causes. The carvings on display include bowls and serving utensils, small animals native to the Amazon region, masks and a shaman’s stool. Wallace’s Peoples and Cultures of the Amazon course in Fall 2017 also contributed to the development of the exhibit.

“I think it’s exciting that this was initiated with the support of the Provost’s Office,” Wallace said. “It’s great that we’ve been able to open this space up to people with various interests from the university community.”

The scope of the themes and topics covered by future MSR Exhibitions is nearly limitless. Drouin said that as Wallace’s exhibition is removed in early spring, it may be replaced by an exhibition of Stan State students’ 3-D printing, or perhaps a collection of literature produced or being studied by students and/or professors in the English department.

“I was excited about the idea of using this space to share what faculty, staff and students are working on,” Drouin said. “There’s no reason these cases shouldn’t be here. They fit perfectly. We’re just the people who are running it.  There’s no pressure here, and people won’t have to fill all four cases. We’re hoping that the Stan State community starts recognizing this as a space they can use to showcase what they’re doing in their studies.”