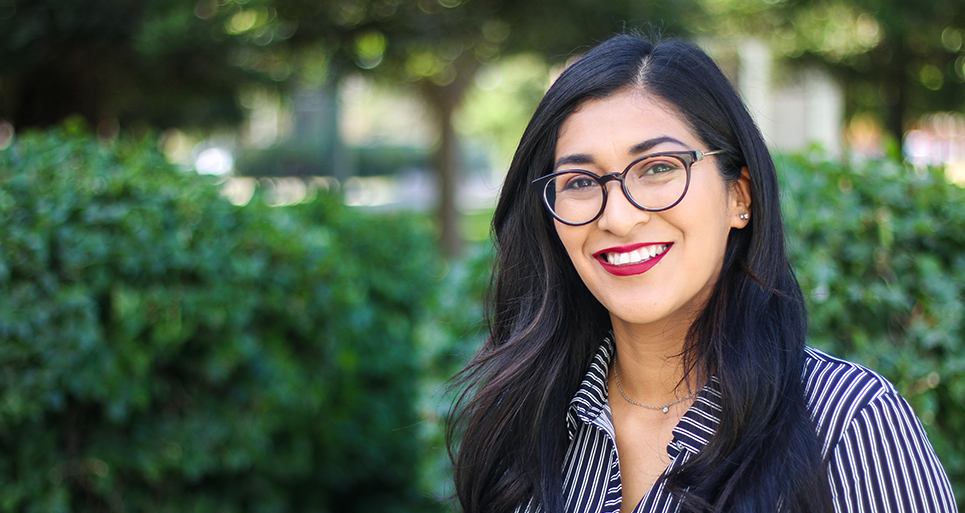 Joana Alfaro regretted all the firsts she’d missed with her first two children: first steps, first words and the like.

Her husband, Ramon, an Iraq war veteran, told her to quit working if she wanted and she did so she could enjoy all those milestones of Sofia, now 3, that she’ d missed with Arely, now 8, and Ricardo, now 6.

“After being home for some time, it just felt like I needed to do something,” Alfaro said. “I was missing something. I was used to working and doing a lot. When Sofia was six months old, I told my husband I wanted to go to school.”

The Delhi resident, who arrived in the United States from Mexico in 1993, never thought higher education was a possibility. Now, the junior sociology major is looking toward graduate school and was one of six students admitted to the McNair Scholars Program this fall.

“I was undocumented,” Alfaro said. “After high school, the thought of college was not even a dream for me. I knew I couldn’t do it.”

Instead, she worked in the agriculture fields with her mom and eventually began working in payroll for an agriculture contractor.

She met her husband online when he was serving overseas as a U.S. Navy corpsman, first in Africa, then in Iraq. When he was discharged, they married, started a family and he helped her become a U.S. citizen in 2011.

He encouraged her to go to college, and Alfaro enrolled at Merced College, thinking she’d study business or payroll or agriculture, something with which she was familiar.

“That was until I took my first sociology class and I fell in love with sociology,” Alfaro said. “I continued to take sociology classes. Eventually I got my Associate of Arts in Sociology and I knew it was something I wanted to continue on.”

Her education and real-life experiences have merged onto her current path.

“I have two interests: working with veterans and mental health,” Alfaro said. “My husband is a Purple Heart Veteran. That’s where my passion for mental health and veterans started. Yes, my husband’s deployment is over but the war he fights back at home is not over. The enemy is still here. The enemy is not in Iraq. It’s within our veterans. We need to help our veterans.”

It’s not just the physical pain — one day she woke up and her husband, who is finishing a business degree at Humphreys College — hadn't gone to work because his back pain was too severe. There’s also post-traumatic stress disorder, knowing the issues that arise from being in a crowded shopping mall or hearing a balloon pop.

“These are the things we don’t see in our veterans,” said Alfaro, part of a group of veterans’ partners who support one another as they support their loved ones. “This is why I'm so interested in helping veterans. There is a stigma where it’s not seen as OK for them to go and seek these resources. I want to make it OK. I want them to know there’s a community out here for them, who are wanting to help them and better them.”

Her proposed research project, a requirement of the McNair Scholars Program that helps first-generation and underserved students prepare for graduate school, will be veteran-focused.

“I plan on working maybe with the stigma associated with mental health and veterans,” Alfaro said. “I want to pick topics that will hopefully open up some doors for these veterans: PTSD, suicide, these are all things we need to be talking about more. They’re really important to me.”

That she finds herself a McNair Scholar is a bit stunning for Alfaro.

“When I first read all the requirements, and you needed letters of recommendation from professors, I thought, ‘Little me, I can’t do that. Who is going to speak for me?’” Alfaro said, tears brimming. “I asked two professors from Merced College. Right away they had letters of recommendation that spoke so beautifully of me. I thought, ‘That’s awesome. That’s me?’ I didn’t realize they saw me the way that they did. Doing the application, I doubted myself. I think I always doubt myself. I don’t want to say I deserve it, but yes, I worked hard for where I'm at. It doesn’t feel real, doesn’t feel like it’s for me. Here I am filling out an application to get into graduate school. Me?! It's very surreal, the thought of ‘me’ and ‘graduate school’ being in the same sentence.”

She hopes not only to be a role model for her three children and her large extended family, but a broader population.

“McNair is a great pathway for me to reach my ultimate goal, which is a Ph.D. — so I can teach,” said Alfaro, whose husband is willing to transplant their family for her to attend the graduate program of her choice. “I want to teach, because I remember when I was undocumented and thinking that’s not even a dream for me. And now that I have a platform to do it — because of all these amazing resources.”