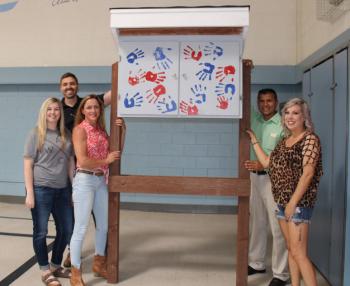 Children attending Washington Elementary School in the community of Winton are finding it easier to borrow fun and educational children’s books this school year thanks to the efforts of some Stanislaus State students, professors and Turlock residents. The small K-8 rural school, which has no formal library on site, now has a custom-built Little Free Library courtesy of the 26 students who comprised Stan State faculty member Brett Ashmun’s liberal studies class last spring.

Installed on the school grounds over the summer, the structure operates on the honor system. It allows children to borrow books whenever school is in session and supplements the Winton branch of the Merced County Library, which is open only two days a week.

The project was born when one of Ashmun’s students went to the school to complete a capstone assignment that required her to work 30 hours in an elementary classroom and present a case study. When she returned to Ashmun’s class and made her presentation, she mentioned there was no library at the school.

“That really stuck with the rest of the class,” said Ashmun, who is a fulltime lecturer working toward his doctorate. “They started asking questions about it and drove it to the point where there was some momentum in the class. We all felt we should do something about it.”

At first, Ashmun suggested a book drive. Then the class went a step further and decided to donate a Little Free Library. Graduating senior Logan Harden went home that evening and presented the idea to her father, Bryan, a retired businessman and high school coach who is also an accomplished carpenter.  From the start of their discussion, she had a feeling the project wouldn’t be a hard sell.

“He is an anything-for-me kind of dad,” Logan Harden said, “so he basically said, ‘Anything you want, princess.’”

Bryan Harden compiled a materials list and estimated the cost at no more than $300. After Ashmun defrayed the cost by contributing a large piece of heavy-duty plywood he already owned, he and his students each made cash donations to raise the rest of the needed funds.

While Bryan Harden went to work on the library structure, Ashmun’s students got busy collecting books to fill it. They started bringing personal donations to class, then they reached out to Advanced Studies in Education Professor Susan Neufeld who leads the ABC Project, a local literacy program and affiliate of Dolly Parton’s Imagination Library. Neufeld saw the project as a chance to help Winton children be successful in school and become lifelong readers, prompting her to donate about 25 books.

“Children who have access to, and ultimately ownership of, books acquire better reading skills and are more likely to continue to read, which in turn leads to school success,” Neufeld said. “And children who learn to value reading as pleasurable, and not just an at-school required activity, will become life-long readers.

The project also caught the attention of English Professor Stephanie Paterson, who echoed Neufeld’s thoughts. She happily donated more than a dozen books appropriate for children of various ages.

“Every kid should have access to books,” Paterson said. “I hope the students at Washington School will find the same great pleasure I’ve experienced from a lifelong reading habit.”

Meanwhile, at Washington Elementary, excitement was building about the project and donations started coming in from school staff and community members. School officials say they received a donation of $100 to purchase new books, as well as several donations of new and used books.

Once the Little Free Library was built, primed and painted, Ashmun’s students coated their hands with red and blue paint and pressed their handprints on the structure’s doors to symbolize the “hand” they had in creating it.

On delivery day, Ashmun, Paterson and Logan Harden were joined by liberal studies students Kaylin Garside and Pauline Fink, both of whom had actively worked on the project. They loaded the Little Free Library onto a truck, drove it to Winton and presented it to the principal of Washington Elementary.

Logan Harden, who noted that her father maintains he doesn’t need credit for his work, predicts the Little Free Library will be around for a very long time. “He is a perfectionist. It’s sturdy, and he even put a real roof on it with shingles and fascia board,” she said. “He knew it would be out in the elements, so he built it to last.”