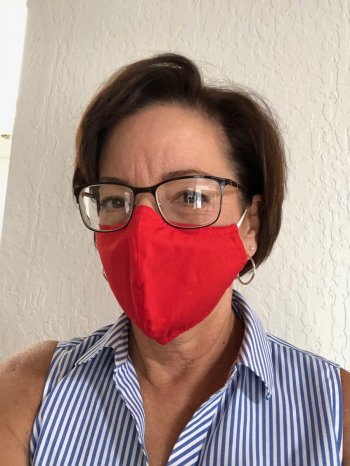 “People react differently,” Marshall explained, describing how she addressed the gamut of their emotions from the shock of possibly being exposed to the deadly virus to fear.

“Some were very angry, and then realized I was just the messenger,” Marshall said. “They calmed down and then they wanted to talk it out. Others are almost in shock and don’t know how to deal with it. Then fear sets in.”

The next day Marshall went to the campus to meet with essential workers, joined by Human Resources Director Julie Johnson.

“I wanted to try to allay the fears and anxieties they have,” Marshall said. “I spoke to my manager and said it would be better if I was physically there and talked to this group.”

Those who’ve known Marshall in her 19 years at Stan State, where she began as a clerk in University Advancement, are not likely surprised by her response.

She’s about people, and the relationships she has built during her tenure have helped her lead the University through this unprecedented pandemic. Her first action was to mobilize the Emergency Operations Center in March, drawing together representatives from across campus to respond to the crisis.

“We’ve got a great team on campus. It really has been about teamwork and people stepping up,” Marshall said. “I can’t say enough about the response. When I reached out for help, people said, ‘What do you need me to do?’

“People are willing to work together so the campus stays as safe as possible, as safe as we can realistically make it. Everybody I’ve worked with truly cares about everybody else.”

Someone had to take the lead, though, and that responsibility fell to Marshall, who was appointed interim director of safety and risk management on Aug. 30, 2019. Because she planned to retire within two years of her appointment, she remains “interim.”

Charged with overseeing occupational and environmental safety, her duties were magnified by the arrival of COVID-19.

“I knew it was coming. We had been preparing for a pandemic on the campus for quite some time,” she said.

“We pulled out the plan as soon as we knew what was coming,” Marshall said. “I pulled my team together and we had a sit down,” Marshall said. “I said, ‘This is what’s going to happen. You need to get your personal lives in order and be prepared for the long haul.’”

Even she couldn’t envision the long haul would find Stan State and other California State University (CSU) campuses relying on distance learning through the end of 2020, though.

Nor can she predict how long the crisis will last, at least not until the necessary testing and contact tracing is in place, she said.

What she can do is arm herself with data and reports available. She’s in regular contact with the Office of Emergency Services for both Stanislaus and San Joaquin counties, the Chancellor’s Office and fellow CSU risk and safety management leaders.

This is a crisis she has prepared for nearly her entire life, if it can be said anyone was prepared to handle such a devastating virus.

As an eighth grader in Livermore, Marshall had a science teacher who taught environmental health and safety and focused on the work of the Red Cross.

“I was really drawn to it and excelled at it,” she said.

A competitive swimmer since she was 8, Marshall became a lifeguard as a high school student, trained by the American Red Cross.

Years later, as a stay-at-home mom, she got involved with Girl Scouts when her daughter put on the green uniform.

She volunteered as a lifeguard at the organization’s summer camps and later was hired to serve as director of those camps. She was required to undergo Red Cross training to qualify for the position, and the Red Cross hired her as one of its instructors.

She taught CPR and basic first aid at local companies before the Red Cross created a position for her as aquatics director, in which she taught safety programs to area high schools and agencies and prepared teachers and students to earn lifeguard certification.

“When I started working for the Girls Scouts, I went to trainings for risk management and conflict resolution,” Marshall said. “Through the Red Cross, I got to work with local law enforcement and fire agencies. I provided a lot of trainings for them.”

Those experiences, as well as training from the Stanislaus County Office of Emergency Services, Federal Emergency Management Agency and the Department of Homeland Security, she said, are helping her in her current role.

“I don’t think I could have taken this on had I not been trained in emergency management like I have. Having a passion to know the information also is helpful,” Marshall said.

There are many long workdays, more conference calls than she can count and the ever-present worry about the health and safety of Stan State workers.

“It’s emotionally draining. It’s exhausting,” Marshall admits. “Meeting with those workers I’ve known and worked with so many years, was like meeting with family. I’m doing everything in my power to make sure my family doesn’t get harmed.”