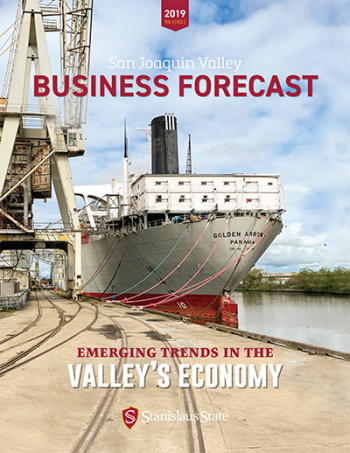 The tariffs and retaliation that occurred in 2018 combined with interest rate hikes will slow economic growth in the Central Valley more than in other regions, and the lasting result will be slower economic growth in the Central Valley through 2019 and possibly beyond. That outlook is according to the biannual San Joaquin Valley Business Forecast produced by Gökçe Soydemir, the Foster Farms endowed professor of business economics at Stanislaus State.

Here are some of the report’s highlights:

Total employment in the San Joaquin Valley in 2018 grew at about the same rate as in the previous year, but slowing in the Valley’s overall economic activity is projected to become more visible over the next two years and is expected to be worse than the decline at the national level.

After a very significant increase in building permits in 2018, a slower increase is projected for this year. Foreclosure starts, which exhibited a short-lived increase as the Federal Reserve hiked rates, assumed a flat pattern when those rate hikes were paused, spurring a fall in long-term. At a yearly average of 8.57 percent, home values in the Valley increased at about the same pace as last year.

Following the decline in oil prices in the third quarter of 2018, the yearly inflation rate began to decrease and registered 3.35 percent over the 12-month period. However, the price of oil increased the first quarter of 2019, putting further pressure on the inflation rate. Driven by increased oil prices, the rate of inflation is projected to increase in the coming months before settling around the long-term rate of 2.31 percent by the second quarter of 2020.

Acceleration in the Valley’s total bank deposits slowed in 2018, but remained relatively strong, with deposits growing 8.01 percent in 2018 compared to 8.62 percent in 2017. Bank deposits are projected to grow at a slower pace in the months ahead. Valley bank assets in non-accrual began to increase gradually over the last 12 months, even though there was a decline in the fourth quarter of 2018. The lowest point in assets in non-accrual was attained in the third quarter of 2017. The same pattern prevailed in assets in default 30-89 days and 90-plus days. Along with total deposits, Valley total net loans and leases is a category projected to grow at a slower pace in the next two years.

This section of the report, added last year, examines activity at the Port of Stockton, which handles shipments of goods such as cement, steel, liquid fertilizer and rice — four bulk items highly susceptible to the pressures of tariffs.

Valley imports, such as cement, steel and liquid fertilizer, continued to decline in 2018 as trade talks between China and the U.S. failed to reach resolution. The resulting retaliation, negatively impacted exports in the Valley such as almonds, wine, grapes and other produce. The decline in liquid fertilizer imports were due to end of the drought in 2018.

ABOUT THE REPORT AND THE AUTHOR

Gökçe Soydemir’s biannual Business Forecast provides projections for the Valley's labor market, regional housing conditions, prices and inflation, banks and other depositary institutions and capital markets. Soydemir and his team use a unique forecasting model that produces lower and upper statistical confidence bands, with results that are expected to fall within this range.