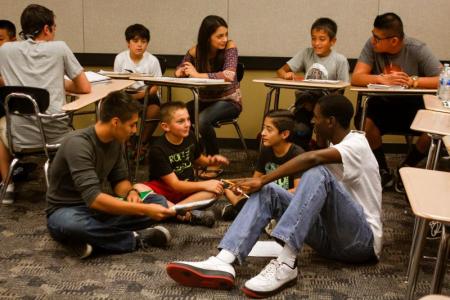 In the first-year composition class taught by Brett Ashmun, great rivalries were playing out.

Bacon and eggs were arguing their relative importance in the realm of breakfast. Ditto pancakes and syrup. A few desks to the right, bow and arrow both took aim at telling their truths.

But as some of the world’s great natural pairings were engaged in verbal sparring, alliances were being forged. The writing assignment brought Ashmun’s students together with those from Christine Rowell’s fifth-grade class from Turlock’s Medeiros Elementary School.

Thirty youngsters joined Ashmun’s class for the exercise, which started with each fifth-grader choosing a college writing partner. The assignment — to choose characters (live or inanimate) and pass a pencil back and forth to create a dialogue between those subjects. At the end of the class, these dialogues, called “duologues” in this exercise, were acted-out for the entire group.

In the back of the room, criminal justice major Yesenia Raygoza was asked to assume a life of crime, as fifth-grader Luis Hernandez asked her to write in the persona of super villain Whiplash, the enemy of Hernandez’s character Iron Man.

“It’s fun to have a college student to work with,” said Hernandez, who added very matter-of-factly he intends to attend Stanford, even though his chosen character famously entered MIT at age 15. “My aunt is a college student, but sometimes she doesn’t have a lot of time to do things like this with me.”

It was impossible to tell whether the fifth-graders or college students were having more fun. Likewise, there was no way of telling which group was learning more in the exercise.

“I’m fascinated by Luis because he wants to be Iron Man and he told me who I had to be,” Raygoza said. “So we’re writing about Iron Man and Whiplash. It’s fun and it’s good to see him smile when he reads what you’ve written, and he takes his pencil and replies right back — that’s great.”

Ashmun and Rowell got the idea for the joint assignment while attending a summer seminar hosted by the Great Valley Writing Project, whose director Carol Minner attended the joint writing session.

“The Great Valley Writing Project is a big reason this is taking place, and also because Carol is so supportive and encouraging in getting colleagues to follow what they believe in,” Ashmun said. “As teachers, we can get insecure about what we’re doing because we create these solo lives in the classroom. But when you meet people like Carol, who is so supportive of ideas like this, you get the courage to move forward.”

The duologue writing assignment was the second outreach project this semester for Ashmun’s class. The year opened with the class visiting Paramount Court Senior Living, where the students spent an entire class session speaking with residents. The students were tasked with writing a poem themed “I’m From” that juxtaposed their backgrounds with those of the residents they visited.

“Paramount Court was a lot of fun,” Raygoza said. “My resident told me all about his life, and told me to go out and make my life happy. He opened my eyes to a lot of things. My resident has done a lot of things during his life, like raised and sold dairy cattle and traveled the world with his wife. It was a really good experience.”

Several students have told Ashmun that relationships started during the visit to Paramount Court have continued, with students checking-in on their writing subjects, and vice versa. While it’s not as likely those same kinds of relationships will emerge from the meeting between Ashmun’s students and the fifth-graders, Rowell still anticipates great benefits from the interaction.

“I expect my students to have a positive experience about the college,” Rowell said about her fifth graders. “I want this to be a place they can see themselves attending. I also want them to have the experience of writing with someone of a different grade level.”

As the rivalries played out in Ashmun’s classroom, it seemed all the students emerged victorious simply from having gone through the duologue, and through the laughter and the absurd give-and-take, there was no question learning was happening.

“I’m getting more out of this class than I expected,” Raygoza said. “It’s not just writing about a single subject, it’s writing about life and how you’re going to excel in it, and it’s a lot of fun.”