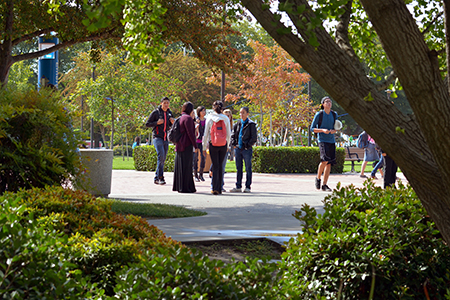 Amy Laitinen admits she was surprised when she saw the results of her statistical methodology for the first time.

A former White House and Department of Education advisor, Laitinen was asked in September by National Public Radio to come up with a ranking system for the nation’s universities.

She responded with a formula that measured upward mobility, and when NPR’s computers crunched the numbers, the top five schools on the list were Harvard, MIT, Stanford, UC Irvine … and California State University, Stanislaus.

“Honestly, I didn’t have a clue about Stanislaus,” said Laitinen, current director for higher education at New America, a non-profit and non-partisan public policy institute. “The dominant narrative in the majority of these studies is about the Ivys and the few elite publics. But some of these smaller public schools are doing incredible jobs. Here’s one just 90 miles away from where I went to grad school (UC Berkeley) and I had no idea it was there.”

NPR hatched the idea for rankings upon release of the U.S. Department of Education’s College Scorecard. The data set was huge, tracking 1,730 variables for more than 7,000 schools. NPR took the next step, asking three recognized experts in higher education to develop criteria for rankings.

“They asked what I would do to rank schools,” said Laitinen, who didn’t see the final results until they were released by NPR. “My initial thought (upon seeing the results) was that this shows that public universities, and not just the big names, can do great by their students. When I looked closer at the data, what impressed me about Stanislaus was the high percentage of students receiving Pell Grants and the low net price for low-income students.”

As a product of public colleges, having attended Miami-Dade Community College and the New College of Florida before her graduate work at UC Berkeley, Laitinen was pleased to see a small public school ranked highly, and public schools overall faring well. After the top three schools, all of which are private, nine of the following 12 spots on the list are taken by public schools — including Stanislaus, Cal State Los Angeles and six UC schools.

“I’m glad this didn’t turn out to be another list with just the Harvards, MITs and Stanfords because those schools by comparison don’t serve a lot of low-income students,” Laitinen said. “They take a lot of students who are well-off by accident of birth, and it’s easy to take folks who are primed to succeed by virtue of wealth and move them along. It’s not so easy to take kids from poorer backgrounds and help them attain the tools to succeed.

“It looks like — by these measures — Stanislaus is doing well, and that’s something to be proud of. You should take this list, trump it in front of the public and trump it to the state Legislature. I think that would be an important thing to do.”

Laitinen’s full study, as well as those from the other two experts, can be found here.