The Department’s Production, “Antigone X," Available to Download and Stream May 11-17

By relying on technology and creativity, students, faculty and staff members in the Stanislaus State Theatre Department have continued performing and entertaining audiences through most of the COVID-19 pandemic while still adhering to safety guidelines.

Proof of their resourcefulness can be observed in their latest production, “Antigone X,” which can be downloaded and streamed for a 48-hour period from Tuesday, May 11, to Monday, May 17. 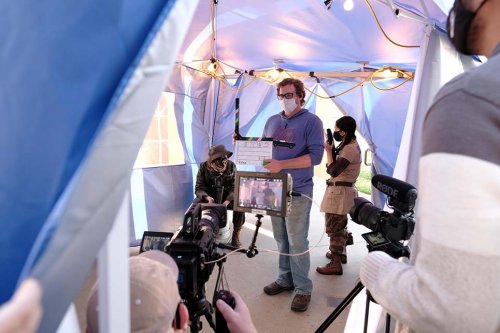 Written by award-winning playwright Paula Cizmar, “Antigone X” is a contemporary adaptation of the Greek tragedy “Antigone.” The play takes place in an unidentified post-war refugee camp and is billed as a story of civil disobedience that examines the place of women and their power to resist and reclaim that which belongs to them.

“Antigone X” is not the first time the University’s Theatre Department has successfully presented a dramatic production in accordance with COVID-19 restrictions. Last fall, students filmed themselves performing monologues they had written, then made the project — called “Behind the Mask” — available to the public via streaming. They also integrated safety guidelines into their filming of Brandon Jacobs-Jenkins’ “Everybody,” a contemporary retelling of the morality play “Everyman” and streamed it to the public in January.

Earlier this spring, the department produced “The Secret Life of Ophelia,” a three-person play that was filmed one actor at a time, with social distancing, and pieced together by an editing team before it was streamed to the public.

While the 2020-21 academic year has been immensely challenging, it has also offered an array of teaching and learning opportunities in theater, according to Carin Heidelbach, assistant professor of acting and directing.

“It has been very interesting teaching theater to students through Zoom, and it has definitely been quite the odyssey trying to figure out how to get our productions done while staying safe,” she said. “But there has been an upside, and the students have learned some new skills that are very valuable.”

The “Behind the Mask” project, for example, allowed students to experiment with finding a narrative, writing their own lines with the help of guest artists, performing what they wrote and filming their own performances. Over the past year, students also learned in detail the differences between performing for a live audience and performing for a camera in a filmed production. They learned a lot about ensuring “continuity” when filming individual scenes, and they learned how to best film themselves as they perform.

“For actors, learning how to film yourself is a very valuable lesson. It’s a great skill to have because most auditions are video auditions,” Heidelbach said. “Actors need to be able to film themselves so that they can market themselves.”

Production challenges faced by cast and crew during the pandemic have varied depending on whether Stanislaus County was in the red tier or the more-restrictive purple tier.

For “Antigone X,” which was filmed in April while the county was in the red tier, limits were placed on cast and crew size, everyone maintained social distancing and filming took place outdoors in the University Amphitheater.

Student actor Laura Martinez, who played Ophelia in “The Secret Love Life of Ophelia” and Antigone in “Antigone X,” found rehearsing and filming herself while home alone to be relaxing because she had no sense of being nervous. She said it helped her overcome some bad stage habits, but she also noted that she found it awkward to film romantic scenes by herself while focusing on a cardboard cutout of William Shakespeare.

She sees the benefits to filming, but she much prefers performing with other actors in front of a live audience.

“There is nothing like performing live with someone in front of you,” the Atwater resident said. “When you are performing alone, you miss that real authentic connection with someone. It’s like magic, and you create it right on the stage.”

Martinez is glad the Theatre Department found ways to navigate the pandemic and continue offering performances to a public audience.

“I think theater has always been an outlet, not just for the performers, but for the people in the audience,” she said. “It’s a form of escapism. It’s important to continue the work because we all need an escape, and it brings a sense of normalcy to everyone.”

Heidelbach agrees with Martinez that live performances and live audiences are more exciting and interesting than virtual theater. She expects some filming and streaming to become the norm in the future because audiences find it convenient and will expect it, but she feels confident that live theater will survive COVID-19 and once again be a regular event on campus.

“People will always want a live experience. That’s true of theater and music,” she said. “We’ve been doing live theater for thousands of years, and it has survived plagues and pandemics. I don’t think live theater is going anywhere.”