Class of 2021 Warriors Prevail Despite Pandemic

After having spent their final year at Stanislaus State in virtual and online spaces due to the pandemic, graduates from the Class of 2021 assembled on campus this week for the ultimate in-person event: Stanislaus State’s 61st Commencement.

The University hosted six ceremonies for the Class of 2021 over three days, May 26-28, in the campus’s outdoor amphitheater. For the 2020-2021 academic year, Stan State celebrated 3,051 graduates.

“After all of your hard work and sacrifices, your dream has come to fruition,” President Ellen Junn said in her Commencement address. “In normal circumstances, commencement is a significant and noteworthy achievement. However, the past year has been anything but normal. As such, you’ve accomplished something that is quite extraordinary and incomparable to any other milestone.

“Despite nearly every aspect of your daily life being turned completely topsy turvy, you continued on and forged ahead. You demonstrated astonishing quiet courage, hope, optimism, bravery, inner strength, tenacity and determination.” 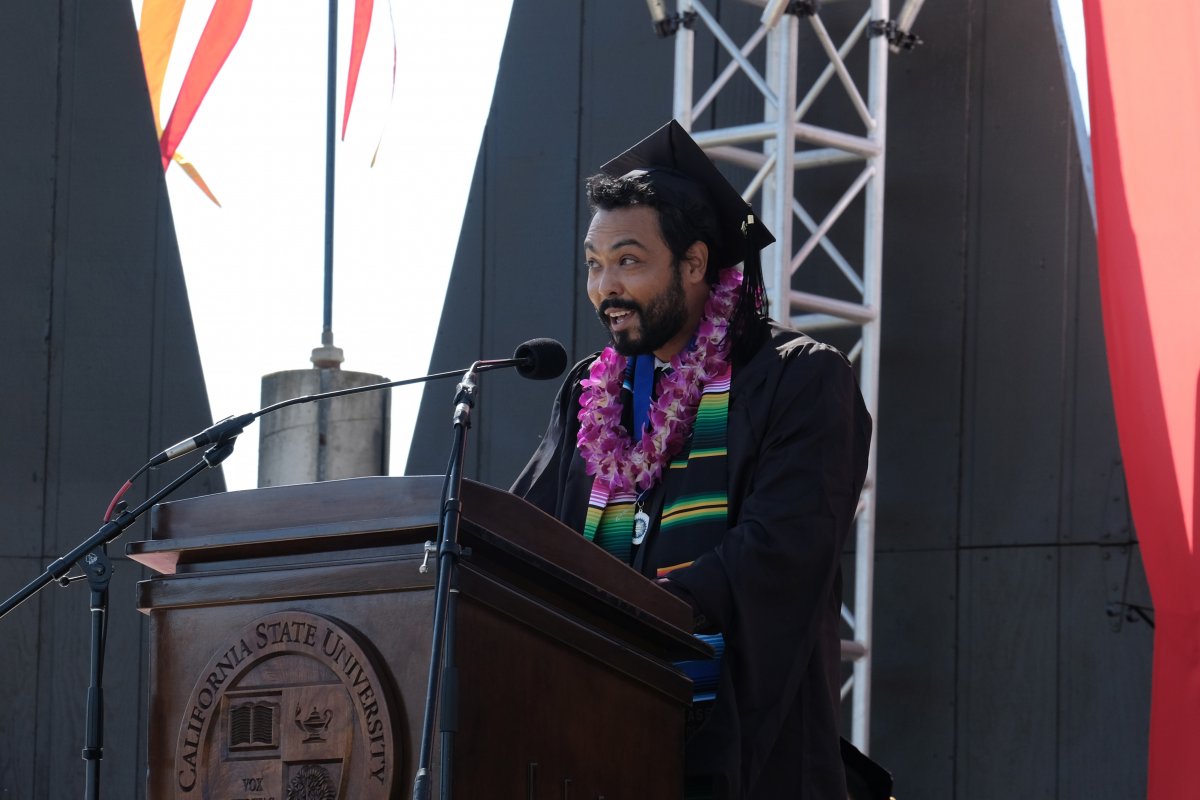 Overcoming difficult circumstances, making sacrifices to achieve goals and uplifting others through words and actions was a recurring theme among the commencement student speakers.

“You have overcome, and you stand here today, dressed in your cap and gown, as proof that you are Warriors,” said student speaker and Master of Business Administration candidate Gustavo Ponce De Leon.

During the Friday, May 28 morning ceremony, President Junn awarded an Honorary Doctorate of Humane Letters to philanthropists, business owners and long-time Stan State supporters Bertha Fitzpatrick and her late husband Benjamin “Ed” Fitzpatrick. The Fitzpatricks have funded numerous scholarships for students over the years and Stan State’s indoor sports venue bears their names: the Ed and Bertha Fitzpatrick Arena.

During her remarks, Bertha Fitzpatrick shared some of the challenges she faced as a Black woman growing up in the segregated South during the 1960s. A native of Wiggins, Mississippi, she recalled how her father often told his children his expectation for them to attend college because he believed getting an education is key.

She earned her diploma in 1965 and planned to attend community college, but Mississippi prohibited Black students from enrolling in classes. So Fitzpatrick moved to Chicago. Two years later, the community college in her home state announced its plan to admit a small number of black students. They recruited her to attend. Fitzpatrick also spoke of the kindness people demonstrated to her and her family during that time and encouraged the Class of 2021 to do the same.

“Kindness and a generous giving spirit made a huge difference in my life that caused a ripple effect that continues to this day,” Fitzpatrick said. “The success Ed and I achieved in business and in life made it possible for us to give back and open doors of opportunity for others.”

Honorary Doctorates of Humane Letters is the highest honor bestowed by Stanislaus State and the California State University Board of Trustees. Ed Fitzpatrick, who was the first African American to serve on Stan State’s Foundation Board of Trustees, passed away in May 2020. Bertha’s and Ed’s son Ryan accepted the honor on his father’s behalf.

A decline in COVID-19 virus infection rates in Stanislaus County over the past several weeks made it possible for the University to organize smaller in-person Commencement ceremonies for students and their loved ones. Each ceremony was limited to 500 graduates, who each were allowed to bring a maximum of two pre-registered guests.

Even with the smaller ceremonies, measures were put in place to ensure the health and safety of attendees. Graduates did not march into venue or sit together as a group. Instead, they sat in socially distanced pods with their pre-registered guests in groups of three. Graduate slides — many with personalized photos, quotes and messages of thanks — along with a pre-recorded announcement of graduates’ names replaced the tradition of walking the stage. All graduates, guests and volunteers inside the amphitheater wore face coverings as required.

Even with the changed environment, some distinctive Commencement traditions remained. “Pomp and Circumstance” regaled graduates and guests as the ceremonies started and graduates arrived in their academic regalia. And when President Junn announced the conferral of degrees toward each ceremony’s end, confetti cannons fired long, shiny gold strands of ribbons into the air.

Following tradition, several student awards were announced during the ceremonies, including Bethany Harper, Marcus Ruddicks and Riley Taylor, who tied as the 2021 recipients of Stan State’s Metzger-Geiger Award, presented since 1970 to the graduate with the highest undergraduate grade-point average in courses completed at Stanislaus State.

Graduate Josué Montoya was named the 2021 Vasché Award recipient. Named in honor of the University’s founding president, J. Burton Vasché, the award is given annually to a student who displays the highest standards of leadership, cooperation, participation, service and scholarship.

The University also held in-person ceremonies for the Class of 2020 on May 20 and 21 for a total of nine ceremonies. All ceremonies were live streamed, and recordings are available for viewing on the Commencement website’s webcasts and galleries page.