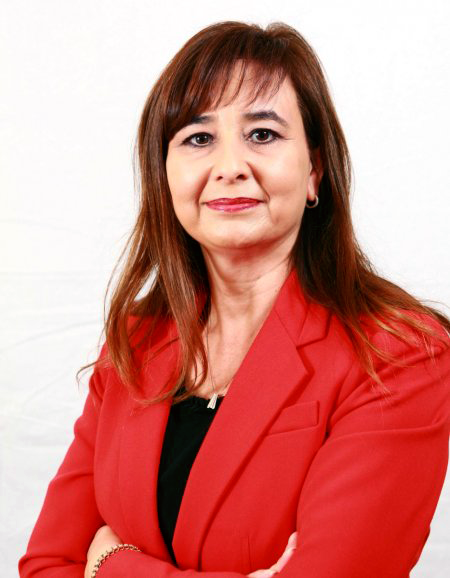 After 25 years in the department, starting as a budget analyst and advancing to a division director, it’s no great surprise that Julia Reynoso was named Stanislaus State’s associate vice president of Capital Planning and Facilities Management.

The new position is more than the next step of her career.

That bond has been built during her tenure with the 80-member department whose responsibilities include landscaping and building maintenance, custodial and event services and engineering and capital projects.

“We’re very close,” Reynoso said. “We can’t build a new building without impacting the teams maintaining them at the end of the project. They all are integrated in the process. They all review drawings and components of new buildings and come on at every stage of the design. There is constant communication with each other, between upper management and staff all along the way.”

Reynoso now is tasked with leading that group, moving the campus forward as it continues its bold march through the 21st century.

Work to make the campus greener and more sustainable already has been undertaken beyond the well-chronicled use of campus lakes and the reflecting pond water for cooling systems and irrigation.

The latest set of solar panels was installed in the fall in Parking Lot 4. LED lighting has replaced traditional lightbulbs. Occupancy sensors are in 99 percent of University rooms, so turning lights on and off is not left to individuals using the space. Water filtration systems are being installed with a goal of eliminating single-use plastic water bottles.

“A lot of my predecessors were involved with those forward-thinking projects,” Reynoso said, noting use of recycled water from the reflecting pond was part of the original master plan that included the first four buildings on campus.

But there’s more to having a green campus, now.

It’s a realm of planning and budgeting that might not have been a part of the curriculum when Reynoso arrived at Stan State as a first-generation student from Livingston High School in 1986 as a business administration major. It wasn’t even a hot-button topic when she entered the Master of Business Administration program, concentrating on accounting, a few years after her 1990 graduation.

But adapting and growing with the job is something Reynoso has proven capable of doing.

She was hired by facilities in 1995 as a budget analyst, and over time she took on supervision of the front desk and shipping and receiving, oversaw motor pool reservations and played a part in capital improvement projects.

“I came to find out just how complicated the world of accounting is in facility services,” she said.

She loved the work, which wasn’t what her parents had planned for the first of their two daughters, the third of their five children.

“As a Hispanic female, I think they assumed my path was to get married and have kids,” she said. “They taught me all the traditional skills you would need for that.”

A high school geometry teacher encouraged her to attend college, and when her parents realized she could attend a university and live at home, they supported her.

Reynoso helped support herself with a part-time job working in procurement in the budget office during her four years as an undergraduate and after earning her bachelor’s degree, she continued in the office. When a recession hit in the early 1990s, she lost her position and went to work for a nonprofit in Merced called Central Valley Opportunity Center.

She returned to Stan State as a clerical worker in the teacher education department in 1994 and a year later, moved to facilities.

She’s still there and didn’t dismiss her parent’s dreams altogether. She is married and mother to two teenagers.

Her promotion on campus means overseeing projects underway and the planning of new ones, but her focus is on something she finds even more important.

“The strength of our department is our ability to share with each other our technical expertise,” Reynoso said. “I’m excited about being the support for them. That’s what I look forward to.”