‘Black Musicians Matter’ Series Steps in Tune with the Times 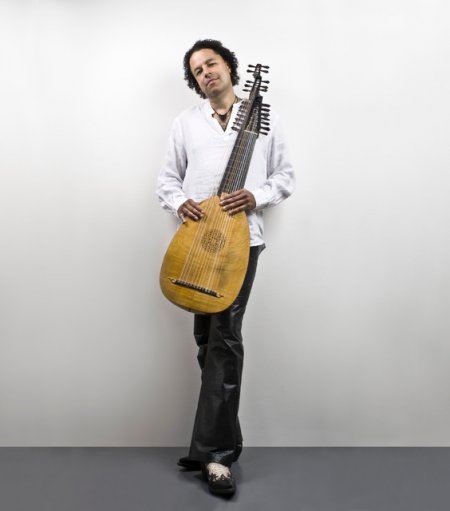 When thinking of a musician who’s a trailblazer, a lute player who specializes in early baroque and renaissance music probably isn’t the first person you’d imagine.

But Andrew Maginley is just that.

Maginley is an early music specialist who has performed with some of the world’s leading ensembles and orchestras that focus primarily on early music performance genres. He is skilled as a soloist and continuo player on several instruments — including baroque and renaissance lutes, theorbo, baroque guitar and English guitar. He has entertained audiences in concert halls, opera houses and music festivals worldwide including the New York and Los Angeles operas, Salzburg Music Festival, Aspen Music Festival and many more.

What makes Maginley unique is that he is one of only a few contemporary lutenists in the world who is Black.

“Andrew is a brilliant lute player in a field that does not often see many Black musicians,” said David Chapman, chair of Stanislaus State’s Department of Music. “He is the only African American lute player I know.”

Chapman recruited Maginley — his long-time friend, a fellow music teacher and Fulbright Scholar — to perform virtually at Stanislaus State this fall as part of a new concert series in the Department of Music: Black Musicians Matter.

Maginley will perform virtually from Europe and give a Universitywide talk about his experiences as an African American musician over the course of several days:

All events will take place via Zoom. The Music Department’s event page will contain registration details and access links.

From Electric Guitar to Lyrical Lute

Born and raised in New York City, Maginley has lived in Europe since 1995, first in Germany and now in the United Kingdom. Maginley began playing the ukulele and guitar at age 6 with his father and grandfather, a native of Barbados. He played electric guitar as a teenager, but his path and musical interests shifted in a major way after he heard recordings of two well-known lutenists. Maginley contacted Pat O'Brien at the Mannes School of Music in New York to study under his guidance.

He has recorded and been a featured player on several albums, including “Andrew Maginley: The Baroque Lute - J.S. Bach, S.L. Weiss & Adam Falckenhagen,” which received critical acclaim from Gramophone and Fanfare magazines.

He scored additional accolades for a 2019 recording, “Handel Uncaged,” on the Resonus Classics label with countertenor Lawrence Zazzo. Maginley also collaborated with his wife Emma Curtis on a two-disc CD “Calliope: Beautiful Voice - Volume the first, English Songbooks of the 1700s,” which received a Best Classical Vocal award from All Music Guide.

After earning a bachelor’s degree in fine arts, Maginley studied the lute and theorbo at Mannes College of Music, where he earned a master’s in historical performance. During his time there, Maginley earned a Fulbright Award to continue his studies in Germany. That is how he and Chapman — a fellow Fulbright Scholar — met while studying guitar.

Every year, Chapman invites a world-class musician to perform and give a masterclass for
Stan State students and campus community members. But this year, with the nation in upheaval over systemic racism, injustice and incidents of violence against people of color, Chapman wanted to do more to elevate discussions of equality.

“I had been watching in horror at what’s been going on in terms of civil rights,” Chapman said. “I was born and raised in Latin America and came to this country at age 18. I had no idea how bad racism was here until I came to the United States.”

He learned that creative opportunities for artists of color were limited or denied because of bigotry and racism, and as a musician he felt “frustrated and cheated.”

As many Stan State faculty members, students and staff members marched, organized teach-ins and held discussions to address and examine issues of equity, equality and social justice, Chapman wanted to be a part of the solution.

“Music is a literary instrument, and it can be used as a powerful delivery tool to discuss racism and social justice,” Chapman said. He hopes the music series will become an annual event and is looking to organize another event in the spring. “It’s a little grain of sand toward the overall push of appreciating Black Lives.”