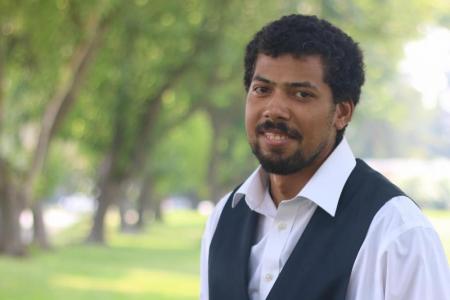 As a 17-year-old high school dropout, Jamal Ferguson would have scarcely recognized the man he has become. The holder of two college degrees, Ferguson is determined to make a difference for low-income communities.

“There were family financial problems, but really I had no faith in my future,” Ferguson said, who grew up in disadvantaged areas of Berkeley and Oakland. “I guess I believed in the statistics. At my high school, one in three didn’t graduate.”

After years of dead-end jobs he signed up for classes at a community college. He left four years later holding an associate degree in music as a singer and pianist with a love of Chopin’s Nocturnes. But a course he took to fill a general education requirement helped him find a new passion, a path and a purpose.

“I took a sociology class and it opened my eyes to how I could actually have an impact on my community. That just turned it all around and gave me a completely different perspective on everything,” he said.

Stanislaus State, a campus he had considered for its audio recording program, proved to have the best mix of personable people, a park-like setting and a social sciences program.

“My first semester here, I had Dr. (John) Kincaid for sociology research methods. He gave us the research information, but he also talked about his journey,” Ferguson said. “He went to community college like me — I’d never heard that before from a professor. He had overcome all these challenges. I’d never heard a college professor talk about his struggles. It really told me as long as I don’t give up, this is something I can do.”

Ferguson dove into his studies and participated in service projects with Alpha Phi Omega, a national co-ed service fraternity. “Their focus is on helping the community. It aligned perfectly with where I wanted to go,” he said.

He has his sights set on urban planning. “My ultimate career goal is to work for the city of Oakland to help strengthen low-income neighborhoods into economically viable communities and to raise the overall quality of life for low-income families.”

He wants more 17-year-olds to see their futures as wide open and possible.

“I didn’t realize how much I’d changed until I went back home this summer,” Ferguson said, who graduated from Stan State in May earning bachelor’s degrees in economics and social sciences, with concentrations in geography, economics and sociology, and a minor in political science.

Ferguson plans to start graduate school in fall 2019, aiming for a master’s degree in urban planning or economic development.

“I never thought I would go to a university,” Ferguson said. “It still feels kind of like a fantasy.”